MLA says parks are not for sale; government looking for operating partners
Nov 18, 2020 6:47 AM By: Heather Stocking 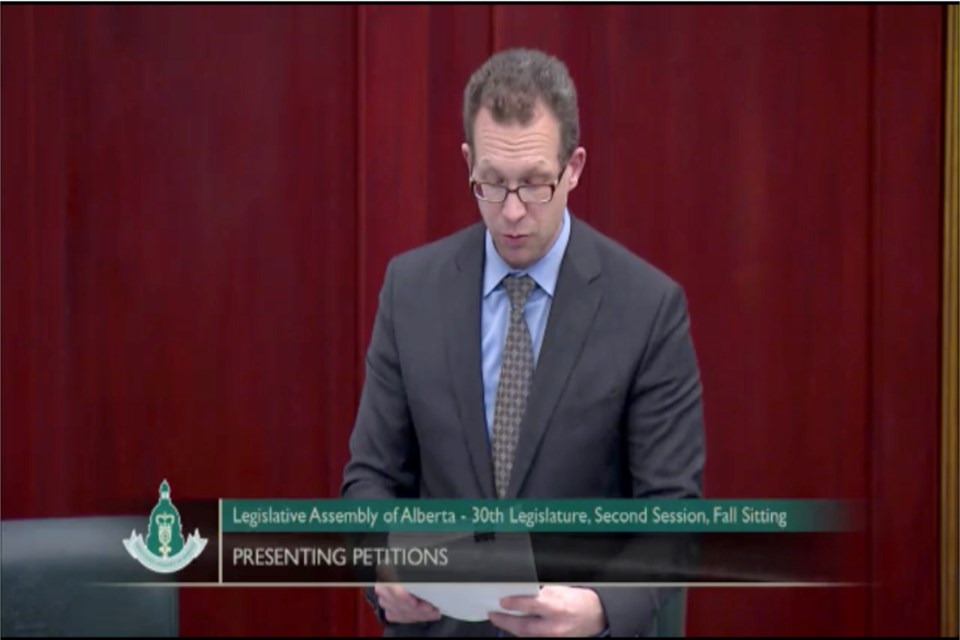 NDP MLA Marlin Schmidt read out the prologue of the Save Chain Lakes North petition and tabled it in the Legislature Oct. 29. The petition has over 1,700 signatures from across the province capturing both local supporters and visitors to the region. Alberta Assembly TV screenshot

ATHABASCA - The Save Chain Lakes North petition to Environment and Parks minister Jason Nixon has officially been tabled in the Alberta Legislature, but local MLA Glenn van Dijken says there is no need to save the parks, simply because they're not for sale.

NDP Environment and Parks critic Marlin Schmidt tabled the petition Oct. 29 after working closely with the group to ensure the preamble was correct. Group members Cecile Fausak, Bruce Jackson and Sherry Heschuk were there to see the work they've put in with the group this summer come to fruition, but there were certainly no colourful party balloons or streamers.

“So, the actual tabling of the petition felt kind of anti-climactic,” Fausak said. “In the procedures of the assembly, there's no opportunity to ask any questions, or provide any responses to it. So, it just sits there, but nevertheless, it's there and it's in the records for posterity as well.”

However, the minister is not compelled to even read the petition, nor the online petitions that have gathered thousands more signatures in support of Alberta's parks.

It has been troubling for the group that there has been no follow-up from either of the UCP MLAs they have reached out to — van Dijken, the MLA for Athabasca-Barrhead-Westlock, and Lesser Slave Lake MLA Pat Rehn, who were also presented with the petition before Schmidt tabled it.

"It was a custom and that’s what’s been taken out,” said Jackson. “The norms and values and unwritten laws of custom in the political system in Alberta have disappeared.”

van Dijken had met with Fausak and Paula Evans Oct. 16 at his Athabasca office for about 40 minutes and said that he tried to explain that the parks are not for sale, but instead, the government is looking for partnerships to help operate some of them.

“The government has stated that the parks are not for sale, but some of the parks have been identified where another partner can probably manage sites more efficiently,” said van Dijken. "That's one of the things I did offer, that if they feel that they would like to see more being done (at Chain Lakes), then the opportunity is there if they want to offer to assist in that.”

He added the revenue generated is $33 million per year, but annual expenditures are over $86 million, making it unfeasible for the government to continue to maintain so many.

“It's not something that's new; these types of agreements have been in place in over 100 of the provincial parks already,” van Dijken said. “Those groups are working with conservation officers to ensure that everything is being managed properly. But the reality is, that typically, those groups manage more efficiently than government.”

The group is not planning on stopping with the petition that is now part of Hansard though, members plan to keep going, and to draft a new petition so more signatures can be gathered, making signs to both be placed where people can see them or to be used in a picket and connecting with other similar groups in the province to unite as a bigger voice.

“That seems to be the real crux of the matter; they keep insisting that they’ll all be OK; all protected,” Fausak said. “I had to say to Glenn, ‘What don’t you understand about the difference between parks protections acts and public lands?’ They just keep putting a big veil over all of that like it’s the same thing.”

But van Dijken says he is not misunderstanding and insists the areas are not going to be transferred to Environment and Parks' Lands division — which would see the parks deregulated and open to development.

“The areas are not being transferred out of Alberta Environment and Parks," he said. “They continue to be under the jurisdiction of Parks. That is part of, I believe, the misunderstanding, the misinterpretation.”