The foundation of innovation

Athabasca's Rock Solid Concrete uses patented technology to reduce water and diesel usage and produce a fraction of the CO2 as traditional methods
Jul 24, 2020 11:18 AM By: Chris Zwick 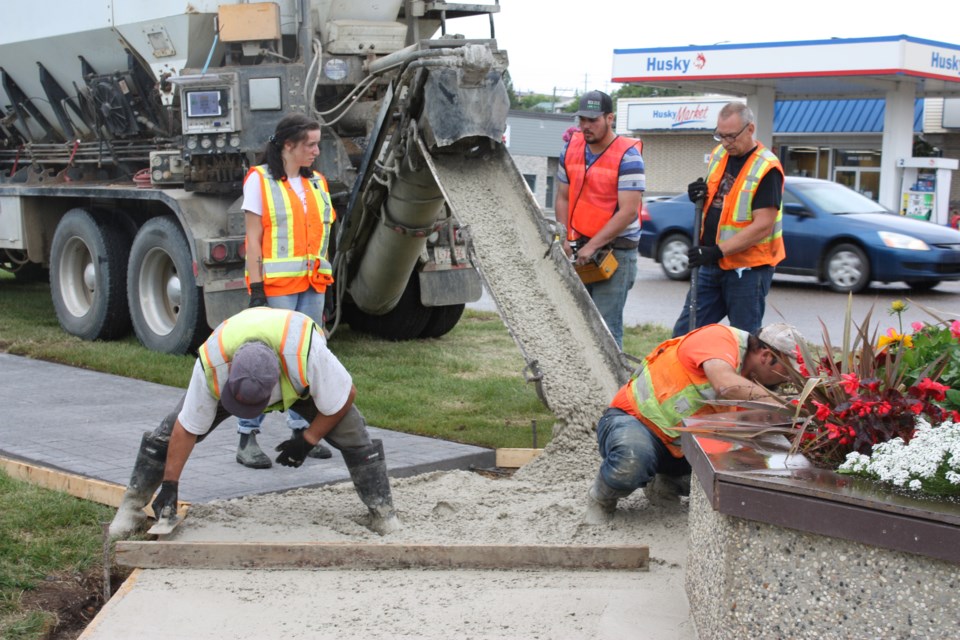 A crew from Diogo Concrete has been in Athabasca for several weeks now making repairs to the sidewalks around the downtown area. They finished their job at the clock at Riverfront Park July 16 using a mixing technology developed by local concrete company Rock Solid Concrete, which has created a product that reduces waste and uses a fraction of the resources of traditional concrete.  Chris Zwick/T&C

ATHABASCA - There are no flashy bells and whistles per se, and to the untrained eye it may look exactly like any other concrete mixture, but if you look further into the chemistry, you would clearly see the future of concrete is here.

Athabasca-based Rock Solid Concrete has been providing its services in the greater Athabasca region for more than a decade now and is making its way to the forefront of the industry by introducing a new patented formula and mixing technique that is not only high quality, but uses far less water to mix, diesel to transport and produces a fraction of the CO2 of a traditional concrete project.

Rock Solid co-founder John Both says the company has been built on non-traditional concrete manufacturing technology. As the first to use a specialized cement patented by a company called Bonhomie, Rock Solid has shown itself to be a global leader in the multi-billion industry and has refined and improved its own mixing technology (patent pending) to the point where it can now be used in commercial applications.

“It’s not the same chemistry as you see in typical concrete,” he said. “Ultimately, it’s a denser concrete and less permeable, which means that it will last longer — longevity is a direct function of permeability. Also, because the chemistry is different, it is more resistant to salts and other chemicals, so it is ultimately a better product.”

If there is one drawback, it is that the new formula sets a lot faster than regular concrete. Where traditional concrete can take 10-12 hours to set, Rock Solid’s mixture is ready in just a couple hours. The savings involved in the production more than makes up for it.

Over the course of a 20-day, 10,000 cubic metre continuous pour project, the traditional drum/barrel delivery method, using a batch plant 20-30 km away, would require nearly 1.1 million litres water for washouts (assuming a seven cubic metre drum); 89,339 litres of diesel; and 941 tonnes of CO2 would be released.

By comparison, the technique employed by Rock Solid would only use 2,400 litres of water and 2,210 litres of diesel, producing just six tonnes of carbon dioxide — a substantial margin in all three categories. Both also points out traditional methods result in up to 10 per cent wasted material, right off the top.

“We brought the technology to the region and when we brought that, one of the things we brought was a technology that has no waste,” he said. “Upwards of 10 per cent of the concrete that is created is waste concrete because it’s not utilized, for multiple reasons. With our technology, there is no waste.”

The amount of fuel and dollars that can be saved with the new technology comes from the fact the product is mixed on site using specialized trucks, using an algorithm to ensure painstakingly accurate measurements, which is all controlled with a tablet.

As the company sees greater success and its reputation for expertise in the concrete field grows, Both said he is often asked why he’s not in a high-rise board room in Edmonton or Vancouver.

“This is where we started the company. This is where home is. From the beginning, we’ve never wanted to follow the old beaten trail and march by the same drum everybody else is marching to, because we knew there were other opportunities,” he said.