Thunderbirds to restart with new format 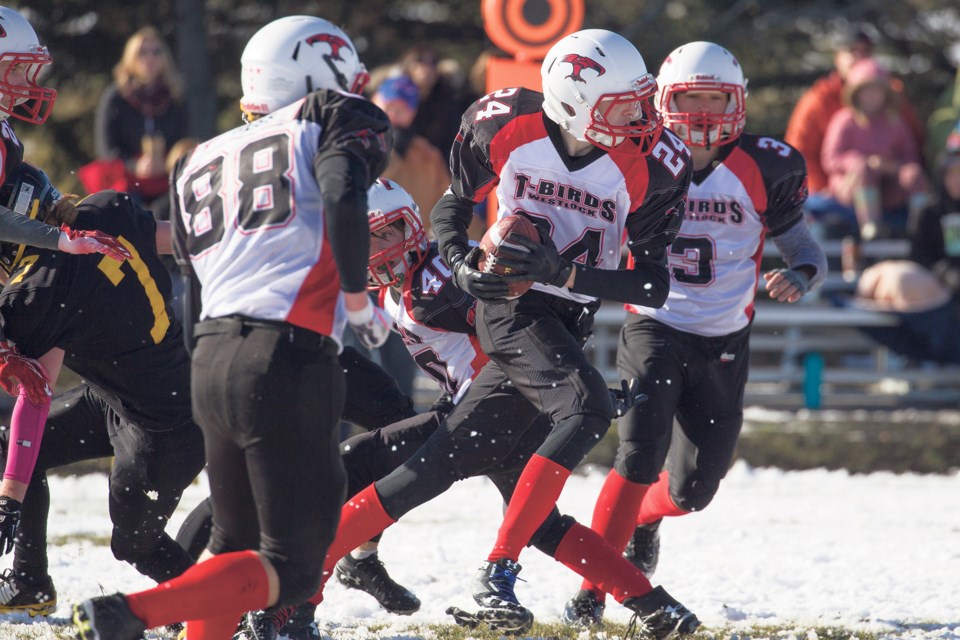 The Westlock Thunderbirds football team will operate more like a cohort of no more than 50 individuals—including players, coaches, and trainers—and will likely be its own league with six- or nine-a-side games, depending on enrolment numbers.

WESTLOCK — With the OK from the provincial government and Football Alberta, the Thunderbirds are starting up football this summer with a new setting and within their own league.

It’ll be six-a-side or nine-a-side games if the province is still in Phase 2 of reopening, explained coach Jon Kramer. The Thunderbirds will act as their own league, since the requirements ask for separate cohorts of no more than 50 people, including coaches and trainers.

The plan is to start mid-August with a training camp—the one that was supposed to take place in May. Then, the season can get going mid-September.

No decision has been made yet on which format to go with for August, since it’ll likely be informed by registration numbers.

"We might even just switch it up from week to week on who's on whose team,” said Kramer.

“Because all of these guys have played together, so much of the fun of football too is competing against people you don't know. That's hard to recreate, but we'll find ways to get the students competing and just enjoy being out there.”

Still, Kramer says this type of faster-paced football is a really good alternative to no football at all.

“I think the kids will have a lot of fun learning it because, again, it's fewer people on the field compared to the 12-a-side, there's lots more room to run and catch and that kind of stuff,” he said.

And it’s not the first time a new arrangement has crossed his mind either.

“For a couple of years, we've looked at doing nine-a-side football. It's really popular over in Saskatchewan for a lot of the smaller centres and schools, but it hasn’t taken off here in Alberta,” said Kramer.

“This would give us a chance to try that out. It's still really good football, it's a little bit more high scoring. And then we're hoping that more schools in Alberta would latch on to it, enjoy it, and that would be kind of where we're going in the future.”

The season will likely end mid-October. That’s because kids can’t play more than one sport at once, and they can’t start a new one within 14 days of ending another. It’s meant to keep cohorts separate in all sports.

“I think a lot of sports are going to come together and find ways to make things work for the youth. That's kind of why we do this anyway. I think it'll work out.”

In part, some strict rules about the daily operations for games and practice will help keep everyone safe, especially for a high-contact sport: “sign in, separate water bottles, no huddling up.” Plus, referees are asked to stay with one cohort and be part of that community.

“We got a lot of learning to do, but everybody's pretty adaptable. We'll see what the hurdles are and we'll do our best to clear them,” says an optimistic Kramer.

Because there will be virtually no traveling this season, registration fees have dropped to $250 for high school and $175 for the bantams. Online registration is open online at www.westlocktbirds.com.

Players from Barrhead and Athabasca can continue to be part of the Thunderbirds.

“We're hoping that we can get a full roster. We'd probably be about 40 students when you add in the coaches and trainers and things like that.”

And it doesn’t sound like it’ll be that hard to fill those spots.

"A lot of the players I've talked to are excited to be with their friends, be active, and go at it again.”

One thing that remains to be figured out: what to do with audiences. Sports that have resumed—or are set to resume soon—across the world have been playing in empty arenas. For the Thunderbirds, the large outdoor field is an advantage.

"Sometimes, people will park their vehicles (at the field) and if it's not soaking wet like it's been all spring, that's a great way to let grandparents and parents, people who are part of their own cohorts, exist around the field,” says Kramer.

None of that is set in stone though, although the coach is encouraged by people’s creative ways to “gather responsibly,” especially for the staple Friday Night Lights game.