Town of Barrhead’s rebranding effort officially on its way 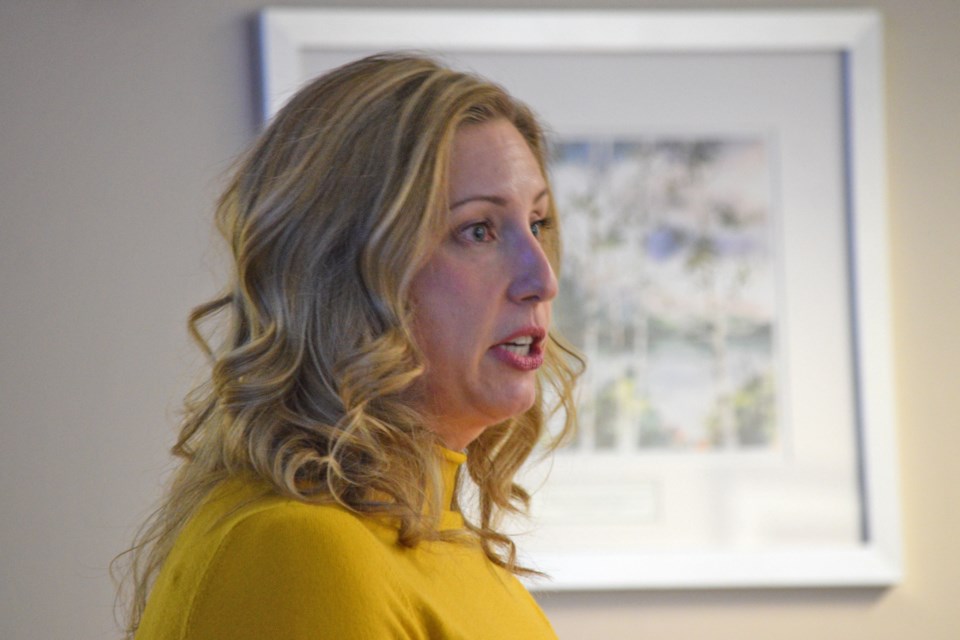 Communications coordinator Kat Hueggenberg talks about some of the benefits the Town of Barrhead's rebranding efforts will have for the community during Jan. 28 council meeting. Barry Kerton/BL

BARRHEAD - The Town of Barrhead has a new logo.

Well, actually it has more than just a new logo. The municipality has an entire toolbox of items to choose from when they create communications, whether it be a Twitter or Facebook post, a media release, or a publication geared to promote the community.

On Jan. 28, councillors unanimously approved for information a presentation by communications coordinator Kat Hueggenberg on the municipality’s rebranding effort.

The topic of rebranding first came before council’s consideration in June when they gave a $70,000 contract (not including GST) to Ion Brand Design, a Vancouver, B.C. based marketing firm, to create a new municipal logo and associated materials.

The bulk of the funding, $54,000, came from an Alberta Tourism Growth and Innovation Fund (TGIF) grant, while the municipality chipped in another $18,000. The town has put an additional $7,000 in reserve for potential cost overruns or other expenses beyond the scope of the TGIF grant, such publishing materials with a new logo.

Hueggenberg noted that the Ion Brand Design created the brand redesign template with the input of the public through a series of stakeholder meetings in the summer.

“Through the workshops, we boiled it down to five words that identified our community and that is what the brand is built on,” she said, noting the five words were friendly, natural, active, honest and generous. “Those are the words that not only describe who we are but are the characteristics that we want to embody in 20 years’ time.”

Using those keywords, Hueggenberg said Ion Design Marketing crafted a “story” to more define the essence of the municipality.

The story is: “The Town of Barrhead stands proud in north central of Alberta, poised for growth and ripe with opportunity. With its roots in agriculture, farm fresh isn’t just a tagline; its a lifestyle. Small businesses are neighbours thriving in an atmosphere of community and collaboration. It is a town where people say good morning and they mean it. You can settle here with a family in mind, and balance life between urban work and country living. A place of wellness, diversity and compassion — this is Barrhead.”

Hueggenberg said she is particularly pleased with the story as the rebranding exercise is about more than just a new logo.

“It is about identifying what we stand for, who we are and projecting those values into everything we do, including how we speak, our publications, how we communicate with our residents, businesses,” she said. “This is just the creative that has come along with that.”

As part of the rebranding, Ion Brand Design has created a number of tools and applications that the municipality can use from templates for letterhead, business cards, signs to merchandise and promotional items as well as a video.

Hueggenberg reiterated they are not required to use any of these tools and staff are free to use elements of them.

“I describe the book [style guide] as the scaffolding that ensures everything is cohesive and working towards the message that we are trying to deliver,” she said.

Hueggenberg added the rebranding would take some time to complete, with projects only going forward when funding allowed.

She also alluded to that community groups would have access to the rebranding toolbox when designing promotional materials for their event.

The town will do a soft launch with items from the rebranding project being slowly integrated into its messaging, with an official launch scheduled sometime in the spring.

Ideas suggested by Ion Brand Design for the official launch include a time capsule and a “Barr-becue”.

“Then there are things we can do internally when dealing with Alberta Tourism, Growth Alberta through Wild, or if we were able to get funding, replacing one of the town’s signs,” Hueggenberg.

However, she said a rebranding, to be truly successful, needs community buy-in, suggesting as part of the official launch the town tie in events to include residents, such as a storefront competition where merchants used their window displays to show residents what Barrhead means.

Coun. Leslie Penny asked if any of the materials would be ready for late summer and Barrhead’s two largest events, Blue Heron Fair Days or the Wildrose Rodeo Association Finals as it would be a good way to showcase the town.

Mayor Dave McKenzie suggested a better idea would be to let the organizers of the events know that the materials are available to help them promote their events.

Hueggenberg agreed, noting it was always their intention to let community organizations have access to the “rebranding toolbox” to help them create promotional items such as posters.

But before that happens, she said, town staff, will have to go through a period of training.

“It’s new so all the departments will have to get used to this and that will take a little bit of time,” Hueggenberg said.

Coun. Ty Assaf noted how professional the package looked saying that is the image the municipality needs to project in their communications, but was concerned if they loaned out the toolbox, using the example of local print shops, what controls they would have over the messaging.

“Will the town need to grant its approval?” he asked.

Hueggenberg said yes, adding the municipality would have the final say in how its logos are used.

Assaf added he was especially excited about the new branding materials being used by other community groups.

“When other groups use this, it is going to be very efficient for us, because it is still being displayed but not from our coffers,” he said.

Coun. Rod Klumph agreed, asking how community organizations would be able to gain access to the materials, saying the colour palette and patterns would be a good fit for the Ag. Society’s promotional materials.

“More importantly, we are hoping that [groups] will adopt those key messages, of who we are and how we want people to see us because that is the seed that is the key for the entire rebranding effort,” Hueggenberg said.