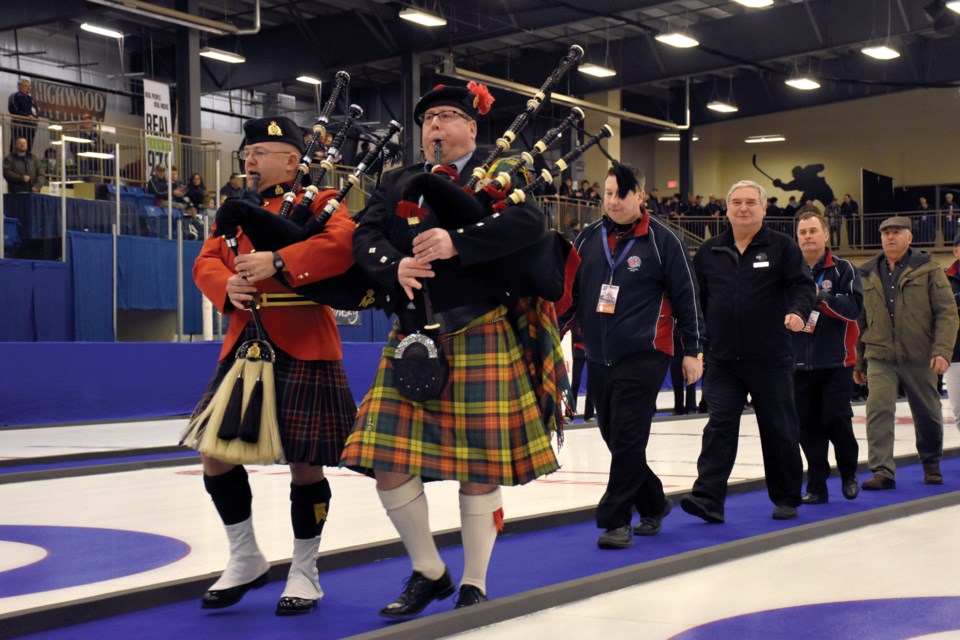 The opening ceremonies of the 2017 Boston Pizza Cup, held at the Rotary Spirit Centre, included a grand entrance that will be tough to beat, as Westlock prepares for the 2020 edition of the tournament Feb. 5-9.

WESTLOCK - The stage is nearly set for the 2020 Boston Pizza Cup.

With just two months left before Westlock and the Rotary Spirit Centre are set to host the provincial men’s curling championships, the volunteer list has been filled, sponsors have been more than generous and most of the details have been worked out.

All that’s left to do is to sell tickets to the big event and find out which of the top men’s curlers in the province will be in town Feb. 5-9, 2020.

Curling club director and event co-chair Mike Taylor said the planning stages have gone rather smoothly, in no small part because this is the second time the curling club has hosted the event in Westlock in the last four years.

“It has definitely helped that we have done this before. I would say that 90 per cent of our volunteer heads have done it before so we all kind of knew what we were coming up against, said Taylor, who added 200 area residents have come forward to volunteer their services, about the same as in 2017.

“Things are progressing right along. We had a volunteer drive on Nov. 30 and we managed to recruit the last few volunteers that we needed … We’ve had a very responsive community,” he said.

At this point, only one of the teams is known and that is the Brendan Bottcher rink out of Edmonton. Bottcher actually won the 2017 Boston Pizza Cup in Westlock as well as the 2018 edition of the provincial men’s championship.

In 2019, Bottcher bowed out to the Kevin Koe rink, who will be attending the Brier as Team Alberta to determine a national champion instead of going for the provincial crown in Westlock.

Eight others will be awarded spots in the provincial championship depending on who wins upcoming qualifying tournaments, the last of which comes mid-January, just a few weeks before the championship tournament in Westlock. Others will be invited based on their Alberta tour standings

A few things will be different than they were in the last few years though, as competitors will take part in a two-pool round robin tournament as opposed to a knock-out format where teams fall into different event brackets if they lose a game.

Instead, the 12 teams will be separated into two pools with every team in each pool playing each other once, with the most victorious teams in each pool moving into the playoffs.

“The nice thing about that is all draws, until we get to the playoffs, all draws will have four full sheets, whereas other times we’ve had two teams for a draw. The curlers like the format a little better and it sells a little better too,” said Taylor.

“In the knock-out format you’re not guaranteed to see the big names actually play each other, but this year it is guaranteed that they are going to play.”

Tickets are now available at 2020BostonPizzaCup.com.

“We’re really looking forward to it and we think it’s going to be a wonderful event,” said Taylor.