Camp Creek beef operator takes part in a series of virtual farm tours that allowed students to witness the birth of a calf in real-time
May 2, 2021 9:00 AM By: Barry Kerton 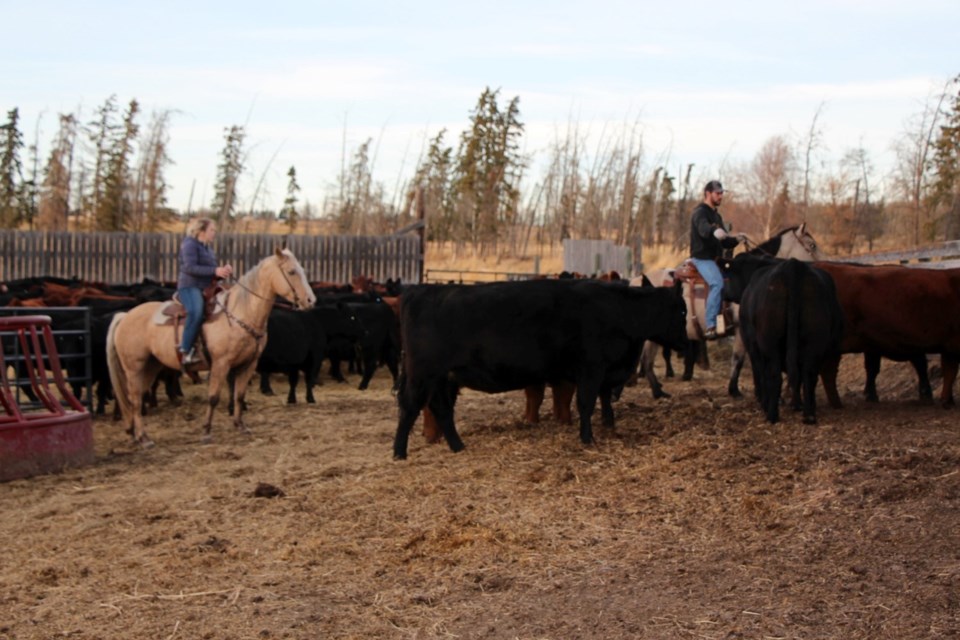 A screen capture of Camp Creek Angus beef ranch operator Jesse Emery's virtual presentation to University of Alberta students. During the presentation, the students were able to watch the birth of a calf in real-time.

BARRHEAD-It is not every day university students get to witness a birth first hand.

But that is what happened to a group of more than 40 University of Alberta (UofA) students.

OK, maybe not first hand but as close as one can get during a university course during the COVID-19 pandemic.

At the end of January, Jesse Emery was giving the group of Animal Science 101 students a virtual presentation about the workings of a  production cycle of his family's Camp Creek ranch, when one of his cows went into labour. As part of the presentation, he also touched on what commercial breeders are looking for when purchasing or picking out a bull, expected progeny differences (EPD) and pedigrees.

EPDs estimate the genetic value of an animal as a parent. Knowing about EPDs is important because it helps predict the performance of two individuals of the same breed between their future offspring when each is mated to animals of the same average genetic merit.

"I warned them it could happen," he said.

At the beginning of the presentation, Emery told the class that he might have to leave at any moment as he expected a calf could be born at any minute.

While he was giving his presentation in his living room via Zoom, Emery monitored the mother's progress through remote cameras the family installed in the birthing barn the previous winter.

"When I saw everything was going alright, I asked the class if they wanted to see a real live birth and just turned my laptop to the screen," he said.

Emery was invited to give the presentation to the class by his former professor Frank Robinson. Emery graduated from the UofA in 2017 with a bachelors degree in agricultural science, majoring in animal science.

"Over the years, we talked quite a bit and he always said that he wanted to visit our farm, but it was too far to bring a class to," he said. "So when COVID happened and he started to look at farms and ranches he could show classes ours was one of the top ones on the list."

Emery added he is glad he could pass his passion for agriculture on to a new generation of potential farmers.

He noted not everyone in a college or university agricultural program comes from the farm.

While Emery enrolled in a Faculty of Agricultural, Life and Environmental Sciences program, many of his classmates, especially in the introductory and intermediate courses, did not come from the farm.

"It was a good fit for me. Not only did it help me on the farm, but when you are passionate about agriculture, you want to learn more about it, but many of my classmates came from acreages or even the city," he said.

It was the same for the Animal Science 101 class, Emery said.

"It was a great experience and a good opportunity and practice to be able to explain your operation to people who don't farm and we can close the gap of understanding between consumers and producers. People want to know where their food comes from and Canadian agriculture produces the best food products out there," Emery said.

Unfortunately, he said he might not get another chance to do another presentation to students next year, as classes will resume visiting agricultural producers in person.

But Emery hopes he will still be able to stay connected with Robinson and the crop of students in other ways, such as serving as consultants for imaginary farms.

In one of Robinson's classes, he had his students create mock agriculture operations. About two-thirds into the project, Robinson threw his students a curveball and asked them to deal with one of the disasters from the list Emery and the others who have participated in the virtual farm tours created.

A week after, he received an e-mail from a student who had a mock purebred Angus beef operation.

"The neighbour's Holstein bull got out and bred some of their Angus cows that were in heat," Emery said.

Not wanting to do the student's work for him, he tried to point the student in the right direction, giving him some general scenarios and the possible benefits and pitfalls.

"It was just a great experience," Emery reiterated. "By participating in these types of events, agricultural producers in all areas can help the producers of tomorrow. By banding together and supporting each other agriculture will be that much stronger for it."