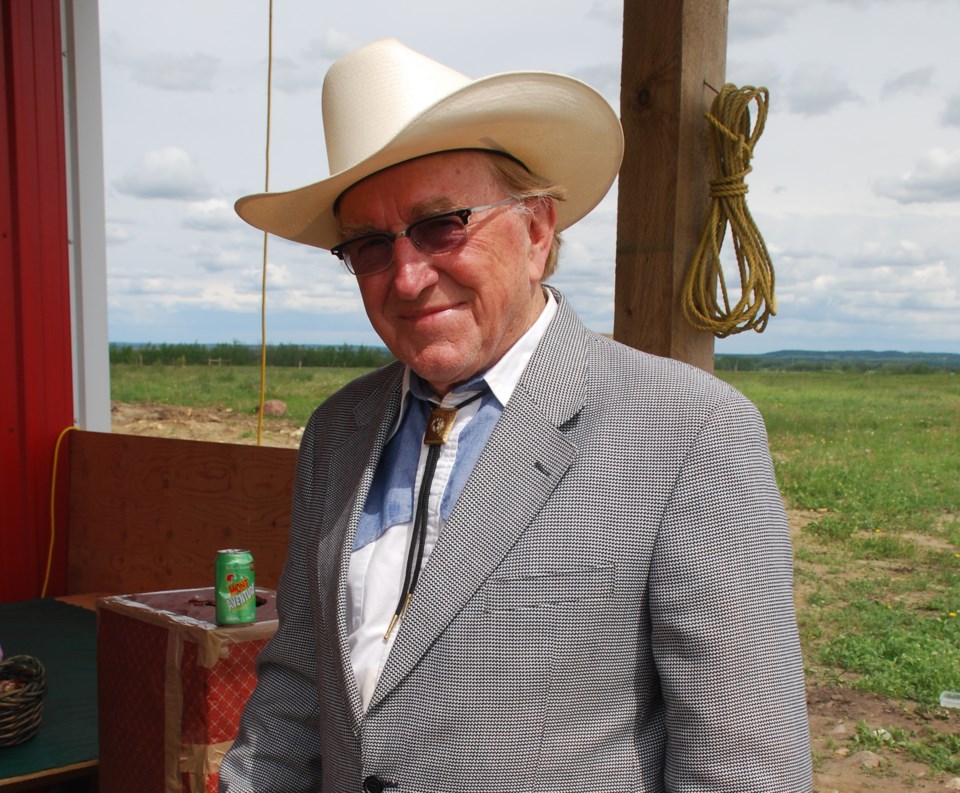 Wally Sczebel at the opening of Rafter S Ranch equine supply centre near Clyde in June 2008. Wally, who passed away April 10, and his wife Roseanna co-founded Teen Time back in 1964.

WESTLOCK - Wally (Walter) Sczebel, who along with his wife founded the Teen Time of Edmonton camp in the mid-1960s, passed away April 10 at the age of 96.

As his family put it in his obituary, he “won his battle with cancer and moved on to heaven to hear ‘well done good and faithful servant,’ and to reunite with family and friends who have gone on before.”

He is survived by Roseanna, the love of his life for 74 years, his daughter Ione and her husband Garry Rea, and his one remaining sibling, Pearl Humble and many nieces and nephews with their extended families.

But beyond that, Wally has also left behind many others who he touched through his well over half a century of the special ministry he and Roseanna shared with young people.

Wally was born near the small rural southeast Saskatchewan town of Jasmin in 1924, the ninth child of a family of 18. Eventually, he was able to move to Edmonton to take barber training, and later owned his own business and eventually ran a chain of 14 Klip ‘n Kurl salons.

Wally married Roseanna Medcke of Jarvie on Dec. 24, 1946, and had one daughter and no grandchildren.

All who knew Wally knew he was a man who had a deep love for God and authentic faith in action. Anyone who had the privilege of spending even just a short time of one on one with him felt that special something about him, and always felt blessed by those times.  His warm smile, handshakes, special hugs, and genuine caring will always be remembered by those who shared those very special times.

Perhaps it was in part the impoverished childhood he experienced that led him, along with Roseanna, to co-found Teen Time of Edmonton in 1964 to reach out to young people. As noted in his obituary, Wally tirelessly and sacrificially gave of his time, talents, money, and most of all, hearts of love to the youth. His ever-present love, faith, and steady hand were a stabilizing factor in the lives of many youth — through whom his legacy now lives on.

After a few years of renting camp facilities at Moose Lake, camping in the mountains and meeting at the Sczebel acreage, it was decided Teen Time needed a place of its own; some place with a body of water on it. Through one of the Teen Time board members, they learned of such a place north of Westlock. The land belonged to Bill and Kathleen Raines, and the couple were thinking of retiring. After some negotiations and with some extra special help in funding, a deal was made in 1974 and Teen Time owned the 350 acres, with the understanding that the Rains could continue to live there as long as they wished. That turned out to be a fine arrangement, as there were times when no one except them were around the camp. Bill Rains was an excellent horseman and shared his knowledge with many young campers. The couple also volunteered much of their time in the early years of the ranch. Cabins and a lodge overlooking the lake were built — a permanent home for Teen Time. The lake became Makewin Lake and the lodge Makewin Lodge. In the Cree language, Makewin means “Gift from Him,” and as noted in the book “Where Love is Felt - The Message is Heard” published on the 45th-anniversary of Teen Time, Wally noted, “How fitting! This really WAS a gift from God.

Wally’s other dream was to have a chapel at Teen Time, being that it is a non-denominational Christian camp. By New Year’s Eve 2000, a log chapel, large enough to hold 140 people, was ready for use, although there was still no seating. The building sits on a slight rise at the southern edge of Teen Time and Wally proudly noted previously that it is the first building you see as you approach the site.

The obituary also notes another fact that is obvious to all who knew him, even if only slightly. Wally was a presence bigger than his stature. His message “Where Love is Felt, the Message is Heard” resonated with all who knew him.

Wally and Roseanna have also been recognized with numerous civic and national awards, including the Caring Canadians award, presented by the Governor General, and the Rotary Paul Harris Fellowship. In 2019, Wally was presented with the Rotary PolioPlus Pioneer Award.

Wally was also a charter member of the Edmonton Mayfield Rotary Club and later transferred his membership to the Westlock Rotary Club, and still later, to the Morinville Rotary Club, where, at his passing, he was still an honorary member. During his time with the Westlock club, Wally spent several years as the youth exchange coordinator. For a number of years, the Westlock club hosted the inbound exchange students who came from several countries at a Harvest Weekend event. At that time, the Rotary District represented the entire province, part of western Saskatchewan, clubs in north eastern B.C., Yukon and the Northwest Territories. During some of those years, the students were hosted for the weekend at Teen Time.

Camping with teens and having wagon trips was nothing new to Wally and Roseanna. In May 1987, when Rotary International first introduced PolioPlus, a campaign to raise funds and eradicate polio worldwide, the couple, along with the late Albert Miller, organized a wagon train trip from Westlock to the front door of the Palliser Hotel in downtown Calgary, an 880-kilometre trip. The trip gained a lot of publicity for PolioPlus, and considerable funds as the district was able to contribute $325,000 to the cause.

It is the family’s wish that, in lieu of flowers, donations may be made to one of the following charities: The Wally and Roseanna Kids to Kamp Fund (Edmonton Community Foundation, 9910-103 Street NW, Edmonton, AB, T5K 2v7, phone 780-426-0015) or Teen Time of Edmonton (12235-50 Street NW, Edmonton, AB, T5W 3C7, phone 780-466-8530). Due to current COVID-19 restrictions, a celebration of Wally’s life will be recorded and made available in the near future. Watch the Westlock Funeral Home and Crematorium website or the Teen Time website for updates.