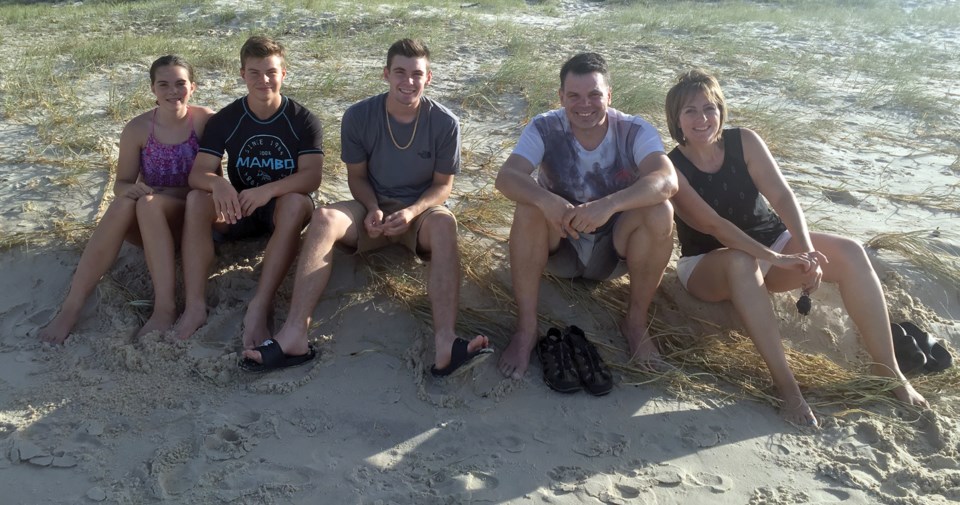 “It was easy, it was fun, beautiful weather the whole time, people were laid back, it was perfect,” said Darren Michalczuk, a Westlock Elementary School teacher who just returned from an exchange in Australia.

The Michalczuks — Darren, his wife Tanya, and their three kids Kieran, 17,  Noah, 15 and Mackenzie, 12 — left Westlock in December 2018 for Gold Coast, Australia, and were replaced by the Walker family. Gemma Walker took his place as a teacher at Westlock Elementary.

The idea to move in the first place was “100 per cent Tanya’s,” said Darren.

“I always wanted to go when I first started teaching, but I was too scared to do it on my own. Then I had that girl come and live with me for a year, and we always remained friends. She came to our wedding and we’ve always connected,” said Tanya.

The family started the trip in Sydney, where they spend Christmas with the girl who had lived with Tanya years ago, Emma Smith, then made their way to Gold Coast where Darren began teaching at a private Catholic school.

For the family, Australia was “different enough that it’s new to us,” but not too much that it was completely unfamiliar.

“Even stuff at the grocery store sits a little different,” said Darren.

As far as adjusting to daily life in Australia, a certain rhythm sets in once you’re acquainted enough with the environment, the people, the patterns, and all the rest.

“We know our neighbours, I know everybody here. There, … it takes more effort to get to know people.”

Tanya said the neighbours were friendly and nice, “but that’s about as far as it would go for where we lived.”

Friendships, instead, came from the workplace.

She said it might have been an adjustment for the Australian neighbours too, who were used to the Walkers living next door.

“The biggest change for us was spiders and cockroaches.”

Tanya got to be a stay-at-home mom for a few months, which she’s never done. Then she took a job with a merchandising company.

“I really enjoyed it. It was a totally different world for me from teaching and real estate, which I have been in … If we were to go back there, I would seek it out again.”

For a landlocked family, living right by the ocean was certainly a change.

“We got an appreciation for the ocean that we never had before … The cyclone passed by where we were and the beaches were closed … Just watching the angry water do its thing, and also being a little bit scared at the same time, it’s really interesting,” said Tanya.

For the kids, who had to adjust to wearing a uniform at school, and all the rigor that comes with a pre-established standard dress code, the start of the year was a little rocky.

“It seems so small to us, but the fact that they’re so strict about it … it is an adjustment for us who have all that clothes freedom,” said Tanya.

“The turning point for them was when they joined the volleyball teams. They kind of found a little piece of home.”

Their two boys, Kieran and Noah, were played almost all the time by the coach. By the end, they won the league championship with their host school.

Mackenzie, their daughter, was scouted on the volleyball team too as she was getting her start into the sport.

“We knew it wasn’t going to be easy for the kids, we knew it was going to be a challenge, but that was the point. Outside of your small world, there’s other places to visit, other friends to meet, other teams to join. We couldn’t ask for more from the experience, especially for the kids,” said Darren.

The school Darren taught at was private and Catholic, uniform-savvy, very different from what he’s accustomed to at home.

“The private meant the people going to school were a different demographic, they had different attitudes and different expectations. The fact that it was a religious school was definitely an adjustment as well. I was surprised that they took me on,” said Darren, who isn’t really a practicing Catholic.

There was also the physical structure of the school itself, with disparate buildings for each grade level strewn about a campus as opposed to one connected building, that required some getting used to.

“When I got there, I had a very challenging class in terms of behaviour. That was one of the adjustments I had to make … Halfway through, I got changed to a math specialist, so I got to teach every class in the school including kindergarten,” said Darren.

He has a strong math background in the first place, and advocates for changes in the curriculum at home.

“There, the principal saw that I could make some changes with math … We definitely have a little bit of an advantage (in Canada) in terms of how kids are doing success-wise, but very similar. We’re both trying to lock in on what works best.”

In social studies, he found the similarities between the two countries in the history of their individual formations by a European colonial empire.

The interesting thing that he noticed was the impact natural disasters — floods, fires, storms — have left in Australian culture over time.

When it comes to math curricula, Darren has formulated some pretty distinct thoughts about what works and what doesn’t over the 25 years he’s been teaching it.

He’s returning to Canada at a time when the provincial government is making changes to math in classrooms, something he’s seen happen all the time: a swing between new methods and returning to the old.

“I looked up headlines for the past five years when I did a workshop six or seven years ago. Within five years, there were national articles from every single province that said new math isn’t working and we need to go back to basics … We’re swinging back and forth between two things.”

The problem for Darren is particularly that swing and finding the middle ground between revolutionary and reactionary.

“It’s important to learn the basics, but if we just do it old school, only one of every three kids will get it. It’s just how the brain works, and I’ve seen it a thousand times.”

He’s been connecting with memory athletes for techniques that he then brings back to the classroom to teach basic math to kids. A good example is the times table.

“It takes me about two hours to teach a class and they would have their times table locked in, whereas normally … you still only get about a third of them.”

Memorization goes hand-in-hand with math, it’s almost unavoidable, but the point is to intuitively have the answer and avoid counting fingers to get there.

In Australia he worked on a range of kids from Grade 1 to 6, and noticed it was easier to teach the younger ones. The Grade 6 students would revert to their original counting fingers method when they didn’t know the answer immediately.

To him, the point is to lock in the basics instead of swinging back and forth between methodologies. The appropriate foundation is what helps kids “move on to all the fun stuff.”

Chilliwack set to rock the main stage at Magnificent River Rats Festival
Feb 21, 2020 7:21 AM
Comments
We welcome your feedback and encourage you to share your thoughts on this story. We ask that you be respectful of others and their points of view, refrain from personal attacks and stay on topic. To learn about our commenting policies and how we moderate, please read our Community Guidelines.