Westlock and Barrhead not interested in provincial police force

Municipalities will pen letter to Alberta’s Minister of Justice and Solicitor General
Mar 15, 2021 11:00 AM By: George Blais 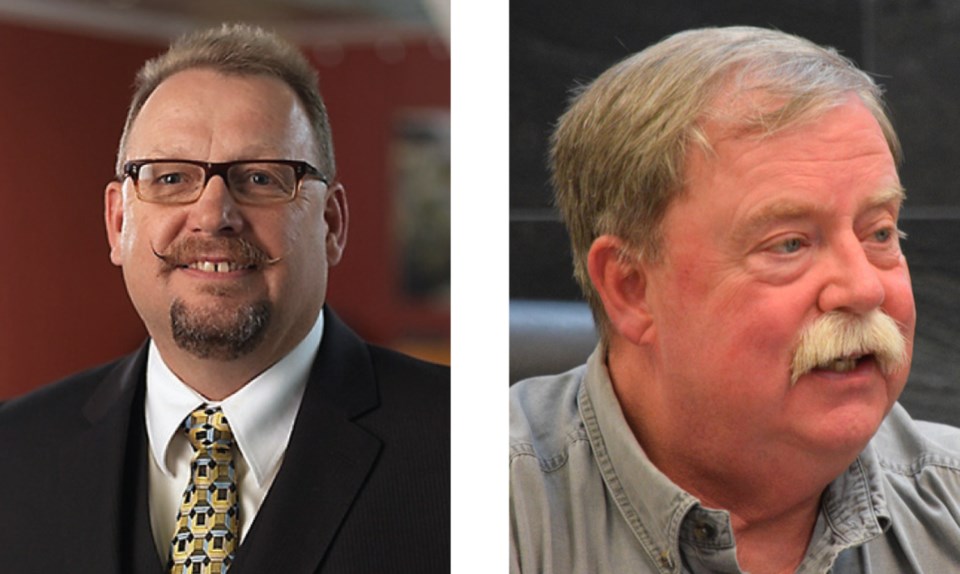 The towns of Westlock and Barrhead will send letters to provincial government expressing concern over the province’s push to create an Alberta police force. Mayors Ralph Leriger (left) and Dave McKenzie recently met face-to-face with Athabasca-Barrhead-Westlock Glenn van Dijken to talk about the province’s proposal.

BARRHEAD/WESTLOCK - The towns of Barrhead and Westlock will add their voices to a growing number of municipalities not in favour of the province forming its own police force.

At their March 8 meeting, Town of Westlock councillors voted 7-0 to pen a letter to Alberta’s Minister of Justice and Solicitor General Kaycee Madu urging the province not to go ahead an Alberta Provincial Police Force, while the following day, March 9, Barrhead followed suit. Westlock Coun. Clem Fagnan raised the issue, citing a letter to Madu in council’s agenda package from Blair Painter, who’s the mayor of the Municipality of Crowsnest Pass.

The UCP government is continuing with plans to establish a provincial police force in Alberta as PricewaterhouseCoopers is currently studying the possibility and are examining operational requirements, processes and potential costs. Alberta Justice said last year that a decision on whether to replace the RCMP will not be made until after the final PwC report, that comes with a $2 million price tag, is completed this spring.

“I’m wondering if more people shouldn’t write letters because the government seems to like, what do they call it, public consultation and they don’t pay attention to it,” said Fagnan.

Added Barrhead mayor Dave McKenzie: "Perhaps if they hear it from more voices they will understand our concerns.”

Painter writes that their council doesn’t support the government’s plan and wondered why they’d forge ahead as results of the Fair Deal Panel survey showed that 65 per cent of respondents did not support the idea. A National Police Federation poll last year indicated 81 per cent of Albertans who receive service from the RCMP are satisfied.

“The staggering costs to implement an initiative of this nature, should be enough of a deterrent to even consider proceeding. Municipalities across this province are struggling to determine how they will absorb the costs for the existing police funding model and should not be expected to consider facing additional expenses for an initiative that is unwanted and appears to have no ceiling where potential costs are concerned,” reads Painter’s letter in part.

Mayor Ralph Leriger said the Alberta Urban Municipalities Association and Rural Municipalities of Alberta have both polled member municipalities and the results “were pretty clear of the stance of everyone.” Leriger went on to note that he and McKenzie met-face-to-face with Athabasca-Barrhead-Westlock MLA Glenn van Dijken recently for a three-hour meeting “so he could clearly understand what our position as municipalities is on the issue.”

“They took several polls and there was a resounding response noting it’s the justice system that’s broken, not the policing part of it,” said Leriger.

McKenzie, a former RCMP officer, said this is not the first time the province has talked about creating its own provincial police force.

"The idea would surface whenever the provincial contract with the RCMP was about to expire," he said. "I think it was just a bargaining ploy the province used during negotiations."

However, in this case, McKenzie believes the push is coming from some urban MLAs who are using their knowledge of city policing.

"There is a big difference between urban and rural policing. They are totally different things and require a vastly different style of policing," he said.