Pembina West, Sunniebend, Golden Sunset and Double Diamond club all went ahead with beef projects
Jun 24, 2021 11:30 AM By: Les Dunford 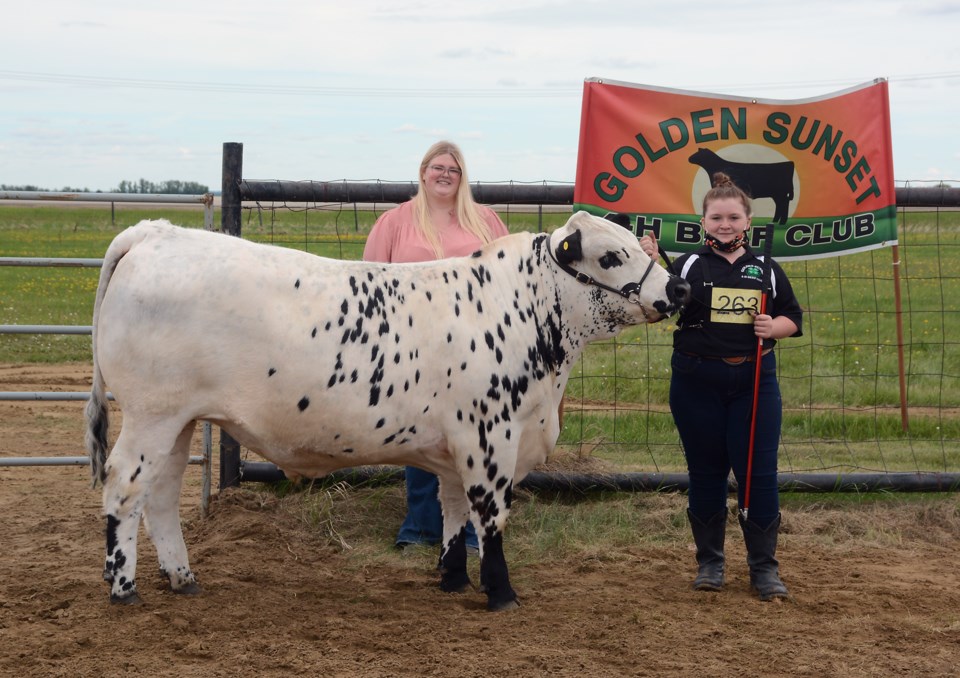 Golden Sunset 4-H Beef junior member Willow Lyons with her 1,350 pound Club Champion Speckle Park steer JOKER and judge Payton Gregoire June 5. Les Dunford/WN
WESTLOCK - It has been another tough year for everyone during the pandemic and that includes 4-H members, parents and leaders.

Still, despite the obstacles, the 4-H beef clubs in the Westlock District — Pembina West, Sunniebend, Golden Sunset and Double Diamond — went ahead with their projects, and this year, three of the clubs held a virtual sale June 7. Pembina West members previously sold their four steers privately.

There was obviously good participation by buyers at the virtual sale. District key leader Brookelyn Felske said 27 steers were sold for a total of $93,703 for an overall average of $3,603.90 per steer and an average of $2.67 per pound. The steers had an average weight of 1,375 pounds.  Broken down by club, the Sunniebend steer average was $2.36 per pound, Golden Sunset $2.75 per pound and Double Diamond went for $2.75 per pound.

In a “normal” year, the beef clubs in the district have been able to hold Achievement Days over two days — an event to show their female and steer projects, and having them judged, with champions from each club and district grand and reserve champions declared. The event ended with a live auction sale of their steers. The entire event, as in other areas, was something members, parents, friends and buyers looked forward to.

This year, two of the clubs, Golden Sunset and Double Diamond were able to hold their own show and have their projects judged live, rather than by video, as some clubs have done. They did this while still following the COVID-19 guidelines in place at the time. Some senior members at both clubs were unable to attend, as they were on quarantine from their schools.  Members and parents were masked, but with enough distance, members were able to remove the masks for (mostly) smiling face photos.

Members and parents gathered at the sports grounds in Clyde June 5 for their show. The animals were judged by Debbie Gregoire and her youngster daughter, Payton. Both are former members of the Sunniebend Club, where Debbie was also leader for a number of years.

The Double Diamond show was held the following day, June 6, at the Meakin Arena south west of Busby. Tia Schram, former member of a 4-H club outside the Westlock District judged both the female and steer show animals.

For her Grand Champion steer, she selected the 1,220 pound Speckle Park steer GARY, shown by Junior member Colin Dostie. Her choice for the Reserve Champion steer also went to a Junior member, Ella Huot, with her 1,470 pound steer, BENNY.

Following the showing and judging of the animals, several of the members joined in a “costume class” show, dressing up themselves and their animals for a bit of fun time.

Having a live show by the clubs, and a virtual auction sale this year certainly gave a bit of a more regular “feel” to the year-end events for the beef clubs, in spite of the pandemic. With eyes looking forward, members are hoping they can return to the regular year end Achievement Day event, where all clubs can participate and compete together for the various awards and honours.