Koot’s Quarantine will be available for viewing online later this month
Oct 14, 2020 6:31 AM By: Les Dunford 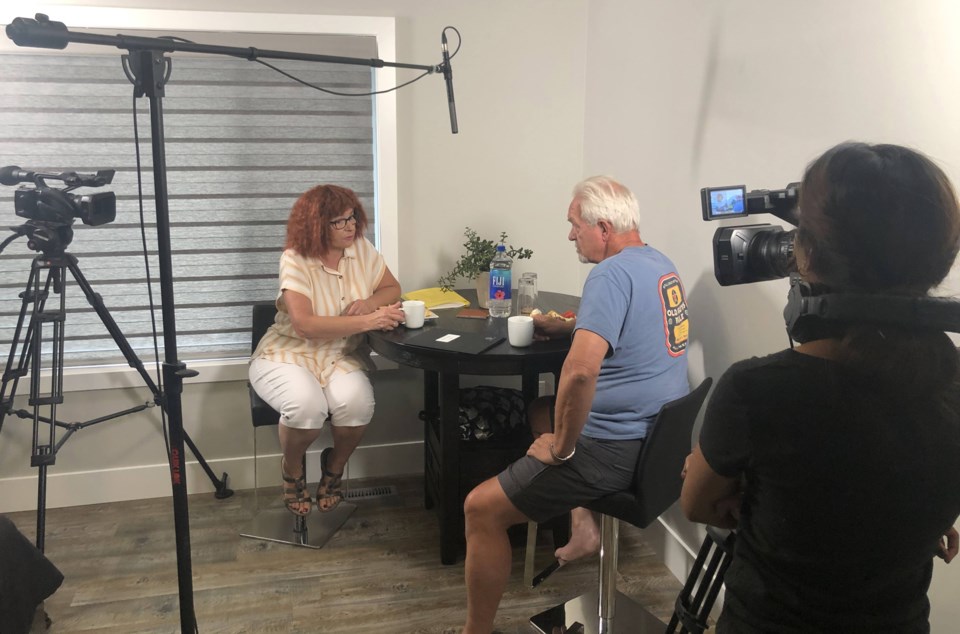 WESTLOCK – For just over a quarter century, the Westlock Rotary Club has hosted a dinner theatre production at the Westlock Community Hall.

But due to COVID-19 this year’s dinner theatre, which is a major fundraiser for the club, seemed all-but doomed.

But Bryce Lambert of Kiwi Productions, who acted in a couple of the first productions and then provided the very professional lights and sound for the rest of the productions since, came up with a unique idea that has been catching on quickly — go virtual.

The original Ole Koot, actor Rex Vollema, was asked to reprise his role as the Ole Koot, and Karen Bouman, who has been in several of the more recent productions was cast as Ole Koot’s wife, Beatrice, or Bea — she was in the final Koot’s production, The Cruise, where she was introduced as Bea.

Minor roles were given to Matthew Charrois as John, a hotel manager in Fiji and Praneeta Lambert as Sai, the hotel concierge.

Praneeta, Bryce’ wife, adapted the script slightly to work for the film production and several weeks ago, the action began.

Bouman said this is very different from her usual acting roles, where one scene follows the other in a hopefully flawless fashion. This production, she notes, has been done in bits and pieces, with re-takes of scenes here and there to get the angles and lines to the quality Lambert hopes to bring to the screen.

“It’s totally, totally different. It’s a bit more difficult to stay in character. When you get on stage you’ve got your lines —you walk out on stage, and you’re Bea.”

But this one, she says, is you film a couple of lines; change the camera angle, and some of the scenes, like the airplane scenes, were all shot without Ole Koot in the plane. For her, she said “It was very difficult to maintain character.”

So at this point, she doesn’t know how the finished production will be, and is looking forward to seeing it, but admits, “It’s been interesting. It’s been fun. And unbelievable. It’s something I’ve never ever done before.”

Labeled as a romantic comedy, the story centres around Ole Koot and Bea, on a flight to holiday in New Zealand, with a stop in Fiji for fuel. And that’s as far as they got. They had to quarantine in a hotel there, stuck in close quarters for 14 days in a hotel room and learn to tolerate those little quirks that sets them apart. If you have seen these two in action in other productions, you just know it will be good.

Lambert said the entire production from start to editing the finished product will entailed at least a hundred hours, time he has donated for the benefit of Westlock Rotary. The Edmonton Aviation Museum was kind enough to make available the use of a jet plane there for the scenes in the plane, and the rest was shot in the Lambert’s home , basically in their bedroom, which represented the hotel room where Ole Koot and Bea were quarantined.

With a small cast and just two locations, he said “We’re trying to keep it as COVID-19 as possible and make the production happen.”

As well as adapting the script for screen production and playing a cameo role in it as well, Praneeta has also assisted Bryce with the boom mike and other technical duties.

He said early last week, there were still a couple of scenes to shoot, and then the editing to ready it for viewing, about 50 minutes in total.

Lambert adds those who purchase tickets can just go to the website on the day they have bought their ticket for, and will have 24 hours to watch the show; so that could be at any convenient time.

“Right now, we’ve raised all the money we need to cover costs. All the ticket sales are going to Westlock Rotary projects. None of it is going to administrative or production costs,” he said.

More information regarding how to buy the tickets and how to set up to watch it will all be on the website.

The Tawatinaw Valley Ski Club is planning to hold a dinner at the chalet on opening night, Oct. 23 for those who want to join with small groups see more on the club here (https://www.townandcountrytoday.com/local-news/tawatinaw-aims-for-big-winter-on-the-slopes-2785483)

Meanwhile the Westlock Rotary Club is planning something similar for either Oct. 29 or 30 at the Westlock & District Community Hall, and will offer delivery of take-out meals as well within a 10-kilometre radius of Westlock for those who choose to watch the production in their own home and have a meal brought to them.