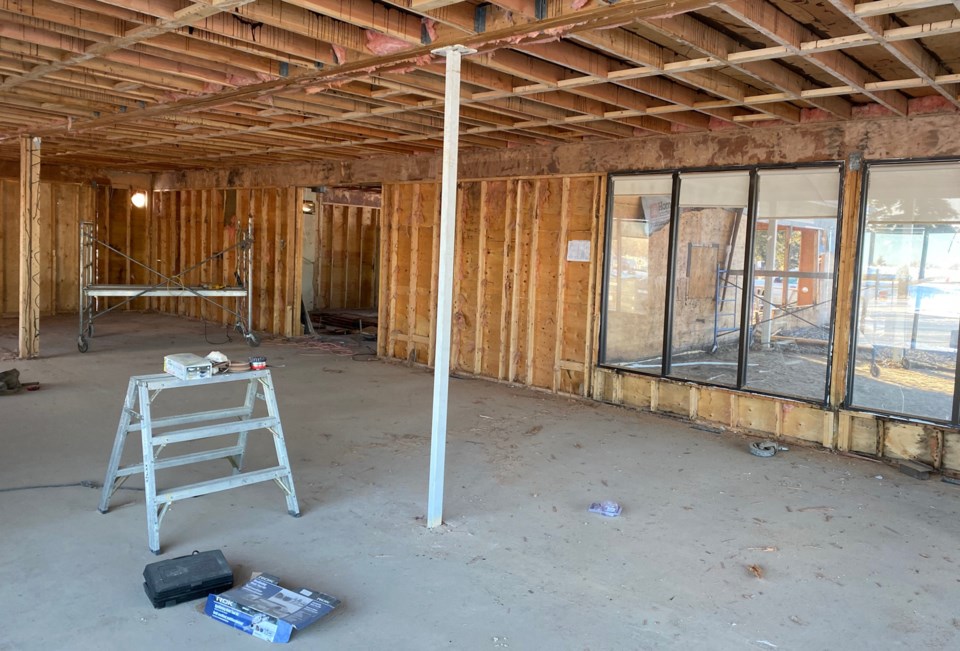 Crews have started on the renovation to the Westlock Golf Club Clubhouse. Work on the facility is scheduled to completed by the spring.

WESTLOCK – The long-talked about renovations to the Westlock Golf Club Clubhouse have officially started, with a tentative completion date of spring 2021.

Crews have already started the demolition process, tearing down the old walls and fixtures from the old 2,599-square-foot building, which in fact was two temporary school rooms (circa 1970s) from Banff that had been pieced together on site in 1994 by Michael Wiese and his family.

The renovations will see the existing covered patio framed in, which will increase the usable building space to 3,538 square-feet total. Meanwhile the new interior floor plan, as noted in Design Hall Drafting & Consulting’s proposal, will promote a more open-concept feel, while enhancing the size of the majority of the spaces as there’ll be increased seating capacity and flexibility in table arrangements.

Jim Lawrence, a club member since the mid-1980s who’s served multiple terms as WGC president and past-president, has been spearheading the renovation committee and was proud to state that the $400,000 project is being funded entirely by donations. The five-member reno committee acted independently from the WGC board.

“This will be a completely funded project, there won’t be any debt for the Westlock Golf Club — when it’s done it’ll be paid for. And we’re going to have something that will serve the membership for the next 20 years or so,” said Lawrence, who incidentally is 14 handicap.

“It’s fantastic that this is people’s money — this isn’t a grant from somewhere, a support from the county or town. It’s current and former golf club members and a few businesses from the community. I really want to thank the original benefactors who wanted to make a difference and also to those who came on board after they realized it was really going to happen.

“The money came willingly, there was no teeth that had to be pulled. It made getting up to the $400,000 surprisingly easy and we really hope to make them proud.” 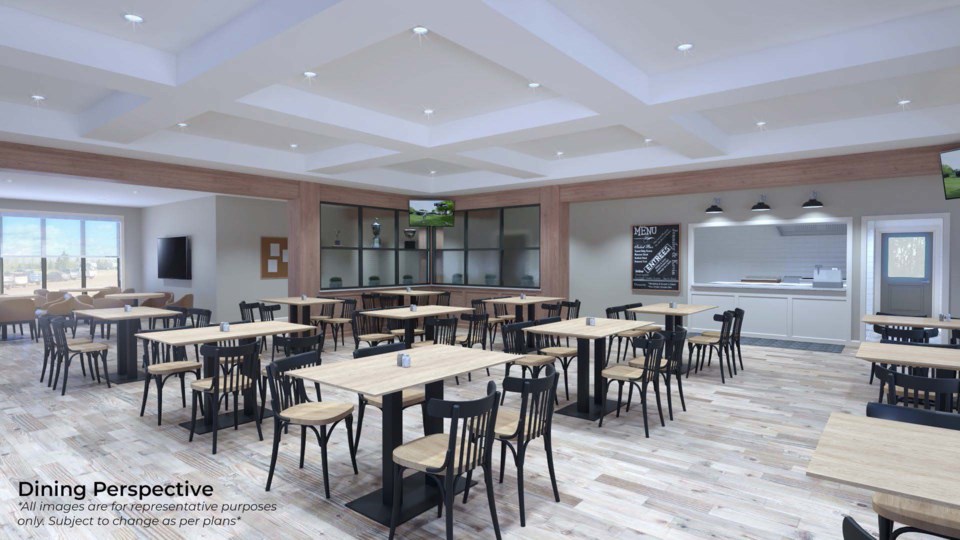 An artist's conception of what the new dining room will look like.

The notion of renovating or replacing the old clubhouse has been bandied about multiple times over the last five years. Building a new clubhouse had been the initial goal, but that just wasn’t doable due to costs, said Lawrence. Government grants were also looked into, but they didn’t pan out.

“In the fall of 2019 when the last plan kind of failed I said I’ll take one more kick at the cat and try to do some improvements to the existing building. We started in July 2020 with an idea. But the most important part was that we had some money in place already from the eight benefactors and then some more money came in from them so there was just too much money sitting on the table to let it go,” Lawrence explained.

“We presented an idea and more people came onboard with their own money. We set a goal for the money and a timeline of mid-November to raise the final dollars. And we met the goal … hallelujah.”

With crews on site now, Lawrence is hopeful for a spring completion date — depending on the year the course has opened as early as April 9 and as late as May 12. He can’t wait to see the design concepts come to life.

“It’s going to look nice and make the experience for those coming in a memorable one. We didn’t want to cheap out and cut corners. We want everyone to be proud of it and going by the pictures in the design document, we’re going to be happy and so will the community,” he said.

“I’d like to see it done by May 1 and I think that’s reasonable.”