What kind of citizens does the new K-6 curriculum create? 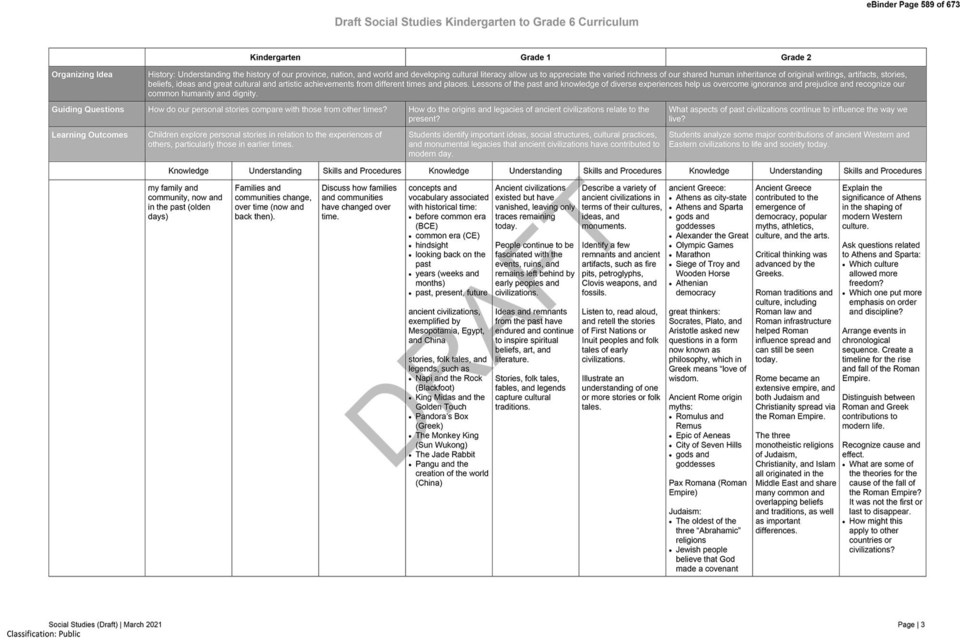 A sample of the K-6 social studies curriculum released by the provincial government last week.

WESTLOCK — The new Kindergarten to Grade 6 curriculum the provincial government released last week has been receiving significant criticism for how it will be teaching social studies.

Historians have taken issue with the focus on chronology, Indigenous leaders are concerned about how late residential schools and truth and reconciliation are introduced, and parents and teachers say there is just too much material.

One of its pillars, explained Education minister Adriana LaGrange, is to teach students citizenship. That’s not a novel idea, and University of Alberta Education professor Dr. Carla Peck says the old curriculum is much better than what the government is proposing.

Peck explained that kids learn about citizenship and “democratic concepts” already, in conjunction with developing a sense of individual and group identity.

They’ll learn how to make their voices heard, how decisions are made in the community and how they can participate. In Grade 1, they focus on their communities and their schools, what responsibilities they have to students, family, teachers.

By Grade 3, they’ll start to learn about quality of life — currently, from a comparative perspective between Tunisia, Peru, India, Ukraine and Canada.

“The idea is that they develop an idea about diversity and different ways that people have their needs and wants met around the world but also in Canada.”

In Grade 4, Alberta is the focus, “both the good and the bad pieces.” Grade 5 is about democracy and the people of Canada. Specific historical examples of democracy like Athens and the Iroquois Confederacy are reserved for Grade 6.

“You start with what is known and local to students ... and you gradually expand to help them make connections from those early grades and help them understand in more complex ways all those attributes of citizenship.”

What kind of citizen do we want to create?

Critically, as both historians, Indigenous leaders and Peck have said, whose stories make it into the curriculum matters. For citizenship, the Western and Christian-centric fact-heavy curriculum isn’t particularly useful.

The story, although not as explicit as in the current curriculum, is embedded in the choice of facts students will learn and marginalizes those that are not part of the dominant group.

And Peck, like historians, argues this method of teaching citizenship doesn’t make good use of research on historical education.

“I don’t see any really meaningful opportunity for students to develop a deep understanding and appreciation of the citizenship qualities (in the new curriculum). There is so much content that is dumped into the grades,” Peck says.

A progress-oriented, chronological story about the past, with victors and losers, leaves students poorly equipped to think about ways in which our society can be made better, and how they can contribute.

A good curriculum would strike a balance between change and status quo, personal and intellectual development. A body of core knowledge is important, but not enough, Peck says. Kids should understand the flaws of our society like sexism, racism, homophobia, and their roots in the past.

Historians have raised a similar concern. In a November 2020 letter to premier Jason Kenney and LaGrange, Canadian Historical Association president Dr. Penny Bryden said the new curriculum is regressive and it fails to teach students how to understand history.

“Research on historical education has shown that it is much more effective to teach students how to understand the past, how lessons from the past can be brought into our world, and how to differentiate between history based on facts and fictionalized accounts of the past,” Bryden wrote.

The focus on memorizing facts, Bryden said, is more likely to turn students away from an interest in history and doesn’t leave students with the necessary critical thinking skills to understand the past.

The minister thanked the CHA for its input in December, but Bryden told the Westlock News that they’ve had no further contact with the Alberta government on the K-6 curriculum since then. Historians haven’t been consulted on the new curriculum either — they don’t appear on the government’s expert consultation list.

Dr. Nancy Janovicek, an associate professor at the University of Calgary and CHA board member, said her first-year students “feel like they were lied to in high school” when they study Indigenous history, racism and exclusion.

Peck, who provided feedback to the government on the curriculum in December, says the social studies portion should be scrapped and redone: “If you just have a surface understanding of the past … you’ll be good at Jeopardy but not much else.”