Work slated to begin on 108th Street in Westlock May 1 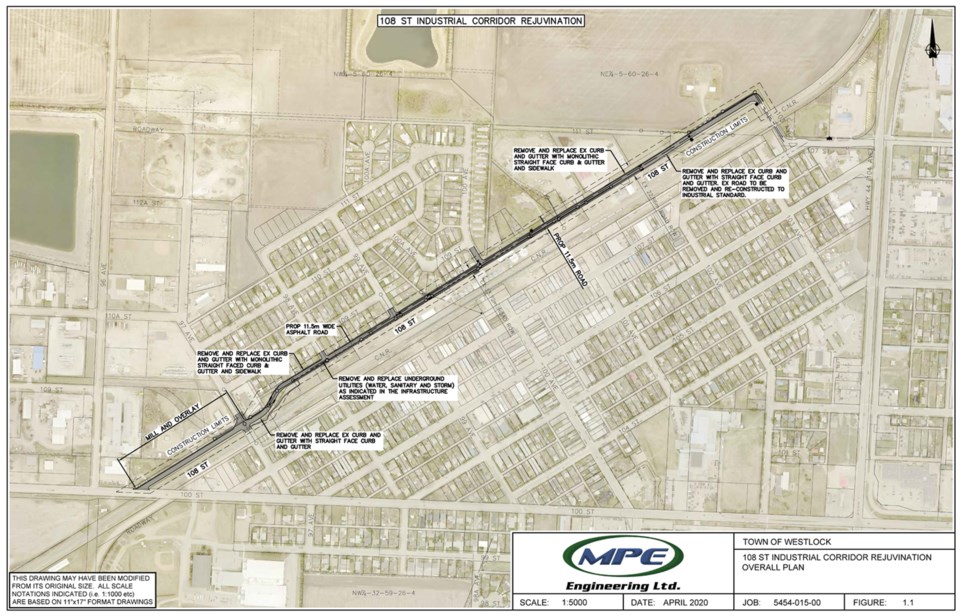 This map details the works that will be done to 108th Street this upcoming summer. Depending on the weather this spring officials are hopeful for a May 1 start date.

WESTLOCK - Weather dependent, crews will begin tearing up 108th Street in Westlock May 1 with an eye towards having the $7.35 million project (2021/22) completed by the end of the summer/early fall.

Timelines and the scope of work for the massive reconstruction project were laid out during a 35-minute online information session hosted by the Town of Westlock Feb. 17. Moderated by 108th Street project manager John Simcock and featuring reps from MPE Engineering and Knelsen Sand & Gravel, the session had 14 attendees including town councillors and staff, plus one 108th business rep and a single Whissellville-area resident.

“With good weather this is a full summer project. With bad weather it could be a carry-over project. So, it’ll be a construction zone for the duration of the summer. We’ve allocated the season for the job,” said Knelsen Sand & Gravel senior construction manager Darrell Quist, noting crews will be working on site six days a week.

“It’s not going to be a mud hole ever … from what we can see there’s enough granular that we’re going to conserve in the removal of the asphalt so it’ll be all-weather passable. We see the viability of no interruption to the agricultural services on 108 Street.

“We believe we’re going into this with eyes wide open. When you’re dealing with anything sub surface, surprises do come up occasionally. The goal of this project is to have a complete job that lasts a long time.”

“A construction job of this magnitude is a growing, living entity as the progress goes. You can draw all the best pictures you want, but site-specific content may alter certain things and there may be adjustments,” said Simcock, noting he’ll be on site daily throughout the project and asked residents and businesses to contact him directly at 780-307-8293 with any concerns or questions.

MPE Engineering’s Drew Fellers, who’s the project manager, said they were contracted by the town to design and tender the project, while Knelsen will do the actual work. The stretch will receive a fresh asphalt overlay, new curbs, gutters and sidewalks as well as a new storm sewer line, sanitary sewer line and sanitary water line.

“MPE will be providing onsite inspection along with assurance that proper materials and grades will be met throughout the construction of the project,” Fellers explained.

“We’ve done this scope many times over. We reviewed the contract and I guess I might as well say this in public, we don’t see glaring things that are missing from the job. I think it’s a thorough design. You always encounter things as you go that are unexpected, but we believe it’s a well thought out design and accomplishes a needed infrastructure upgrade for the community,” added Quist.

Knelsen project manager Shawn Wieler dug more into the details of the job saying it’s a two-stage process as they’ll start at the west end of 108th Street and head towards the high point, block by block.

“We’ll be taking off the asphalt for the first block, continue on with storm sewer and go all the way until we get to the high point with the storm sewer,” Wieler explained. “We’ll then start at the west end again and then tackle the underground with the sanitary. That being said as we’re working on the west end we’ll have most of our underground crew head back to the east side and start work there. We see it as a very straightforward project.”

And Knelsen officials confirmed that at least one entrance to the street will remain open throughout construction.

“There will be access from one end or the other … and there may be times when there’s access from both simultaneously. But there’ll never be no access,” Quist confirmed. “Our communication with the local businesses, emergency services and the Town of Westlock is going to be the key component to making sure that there’s awareness of detours for people who are normally commuting through the area. It is going to be a construction zone for the duration of the summer.”

“We’ve got to accommodate traffic the best we can and make sure there’s access for everybody,” added Wieler.

Westlock Terminals CEO Clifford Bell said they’re looking forward to the project, noting that  Simcock had previously filled them on the specifics.

“We’re pretty confident it won’t affect Westlock Terminals too much. We’re in a bit of a down year for volumes, so it’s probably the best year to do it … so long as the weather cooperates,” said Bell.