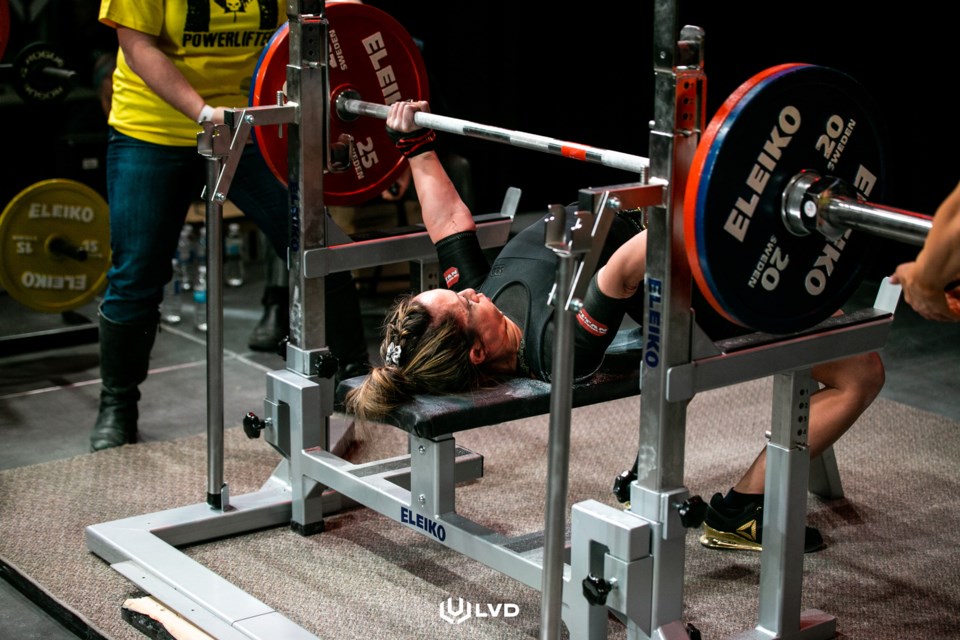 Originally scheduled to be held in May, the event has been postponed to August due to the coronavirus pandemic leaving the 35-year-old Frank more time to hone her craft.

“I'm actually quite excited that it was postponed just because if it had taken place in May that's quite a quick turnaround to nationals,” she said. “So, more time to train and hopefully make more substantial improvements.”

Frank started consistently lifting in 2012 and first tried her hand in physique competitions but didn’t think it suited her so she moved into powerlifting, which is the squat, bench press and deadlift. She’s been training for powerlifting since 2016 under the Edmonton-based coach Shane Martin.

“I competed in some physique shows and it just wasn't really a good fit for me or my personality,” Frank explained. “But I did enjoy lifting weights. So, I heard about powerlifting and tried it and enjoyed it.”

Last year Frank went to the World Championships with Team Canada to Tokyo, Japan where she finished fourth but at nationals earlier this month, she won two gold medals while competing in the bench press.

“Lately I've competed a little bit less and focused on the bigger competition,” she said. “So, I see nationals every year and then worlds last year and this year, and then usually I do only about one other competition a year either a smaller one, or provincial.”

She has been working with Martin for a year and a half, with Martin setting up the workouts and Frank either using her home gym or the equipment at the Multiplex when it’s open. The workouts have paid off with the 125-pound Frank able to lift over twice her body weight in the equipped bench press.

Frank is using the postponement to try to achieve her goal of lifting 100 kg, or just over 220 lbs.

Frank does a lot of accessory exercises besides weight lifting, like making sure that she’s healthy, that her muscles are healthy, doing mobility work and a lot of mental training.

"To kind of get your mind around with being heavier weight and then also in a competition setting not getting overwhelmed and being able to stay focused,” Frank explained.

Food is an important part of training as well and is tailored to where Frank is during her workouts in comparison to competition.

“I eat a pretty balanced diet,” Franks stated. “I do make sure I get enough protein; that my calories are at an appropriate level depending on whether I'm trying to gain weight or to lose weight and then I also have to hydrate.”

Let’s play ball
Jul 16, 2020 6:30 AM
Comments
We welcome your feedback and encourage you to share your thoughts. We ask that you be respectful of others and their points of view, refrain from personal attacks and stay on topic. To learn about our commenting policies and how we moderate, please read our Community Guidelines.