BARRHEAD-Melissa Lotholz is hopeful the International Bobsleigh and Skeleton Federation will find a way to salvage the 2020-2021 season despite the problems the worldwide coronavirus pandemic presents.
Jul 24, 2020 6:31 AM By: Barry Kerton 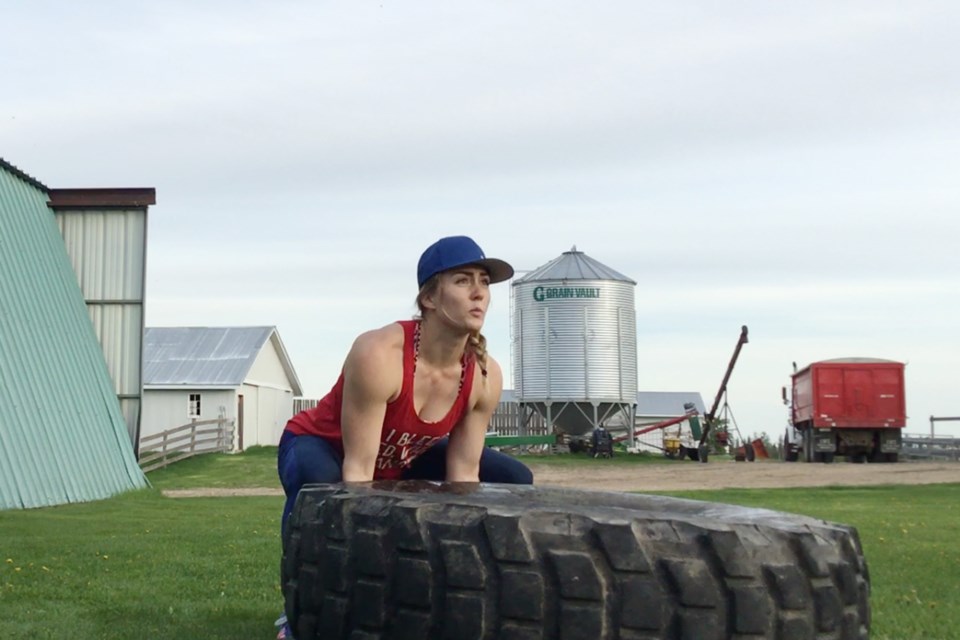 Canadian bobsleigh athlete has had to be inventive in her training due to restrictions brought about by the coronavirus. Here Lotholz makes use of an old tire supplied by Fountain Tire to do some tire flips as part of her overall strength training regime.

BARRHEAD-Melissa Lotholz is hopeful the International Bobsleigh and Skeleton Federation will find a way to salvage the 2020-2021 season despite the problems the worldwide coronavirus pandemic presents.

That is what Lotholz told the Town and Country This Week during a break between training sessions on her family farm near Barrhead.

The 2020-2021 season was Lotholz fifth season as part of the Canadian Bobsleigh Team. She first joined the squad in the fall of 2014 as Kaillie Humphries’ brakeman. She would remain one of Canada’s top brakemen for the next four years. Over that time she would accumulate 17 World Cup medals, including two World Championship silver medals as well as a seventh-place finish at the 2018 PyeongChang Olympics.

Last year she decided it was time for a new challenge and try her hand as a pilot. Lotholz spent the majority of her time competing with Canada's development team competing in the North American and Europa Cup circuits as well as the prestigious World Cup circuit. She also competed early in the season in monobob that will be making its Olympic debut in 2022.

"The [International Bobsleigh and Skeleton Federation] hasn't postponed anything as of yet," she said. "Their priority is to work with all the different nations who are hosting events to try to figure out how things can take place," she said. "If we can, like [the NHL] function as our own smaller cohort or bubble as bobsleigh athletes hopefully we can hold a resemblance of a 'normal season'.

Having said that she understands the difficulty the federation will have. Unlike the NHL, adding to the difficulty is that although there are only a small number of facilities that can host these events they are spread across several countries which all have unique COVID-19 difficulties and restrictions.

Of course, the virus and the restrictions have made it more difficult for athletes to train.

"It all depends on where an athlete is from," she said, adding she feels fortunate to be from Alberta and live on a farm, noting other provinces have a much more stringent set of regulations. It has been only recently that facilities that gyms and physiotherapy offices have been allowed to reopen.

So that has meant, Lotholz and her coaches have had to be inventive when it comes to training.

It has also meant that she has had to restrict her activities to dryland training. When Lotholz returned to Canada after the conclusion of the season in late January, she went to Whistler to train at a pilot's school. After that concluded she had hoped to go to Lake Placid, New York to train and compete in women’s monobob but those plans changed when the events were cancelled due to the coronavirus outbreak.

"We had hoped that we would all be able to come together for a testing camp at the end of August, in Calgary, but on [July 10] it was cancelled because it couldn't be classified as essential travel," Lotholz said.

The national team still has another push camp scheduled for September in Calgary at the Ice House (North America's only indoor ice push track) and she is hopeful that will take place. Currently, the Ice House is slated to open at the end of the month.

Until then she will continue to train on the farm doing a combination of strength and sprint sessions.

"I am in no rush to look for another facility, my coach is confident in the program I have put together at the farm," Lotholz said.

For example, instead of doing power lifts, she flips large farm equipment tires, donated to her by a local tire shop or pushes farm equipment like a quad around. She also can perform weight lifting squats using assorted weights she found totalling 100 pounds and a piece of scrap metal along with various resistance bands.

"It is interesting, our focus is different," she said. "I can't do maximum weight stuff but we can focus on higher reps or the speed the bar is moving."

Lotholz added that living on a farm, sprint training was the easiest to adapt.

"You have a couple of thousand acres to find a flat spot or a grassy hill," she said. However, Lotholz said it isn't as efficient as training on a proper track, noting she tends to 'spin-out'. Nor is it as safe, "I'm always saying, please don't let me turn an ankle."

Each training is videotaped and reviewed by her coach.

However, perhaps the hardest thing to overcome initially was the lack of physio, massage and other specialists.

She said unlike a recreational athlete, who only accesses these services when they are injured, an Olympic-calibre athlete, to remain at peak performance a lot of 'maintenance' is required.

"Dealing with tight muscles," she said. "If certain things are tight or locked up it causes weird compensation patterns because it isn't as efficient and it could lead to an injury ... and that is why I was so happy when Fit for Motion reopened ... the first time I went there was a lot of work to do."

The reopening of these medical specialists also allowed her to videoconference with the team's physiotherapist.

"When you are working for hundredths of a second, if you can get your body even one to two per cent more mechanically efficient, that's massive," Lotholz said.

As for if she is nervous about potentially putting herself at risk by competing on whichever circuit the coaches see fit to place her she said, not really.

Lotholz said she is confident the coaching staff, event organizers and public health officials in all the various jurisdictions will do their utmost to ensure athlete safety.

She added if the federation and the various countries involved give the OK for the bobsleigh season to go ahead in some form it would mean a great deal to athletes like herself, who are still developing their skills.

In the case where the federation decides to cancel or drastically modify the season, the Canadian team is making contingency plans to get time in at the Whistler Sliding Centre.

"We are at the point where we need to get exposure on all these different tracks to be competitive in the Olympic season to qualify sleds for the games," Lotholz said. "Unfortunately, like everyone else, these things are all out of our hands. All I can do is continue to work and train and be ready for whatever opportunities that come."