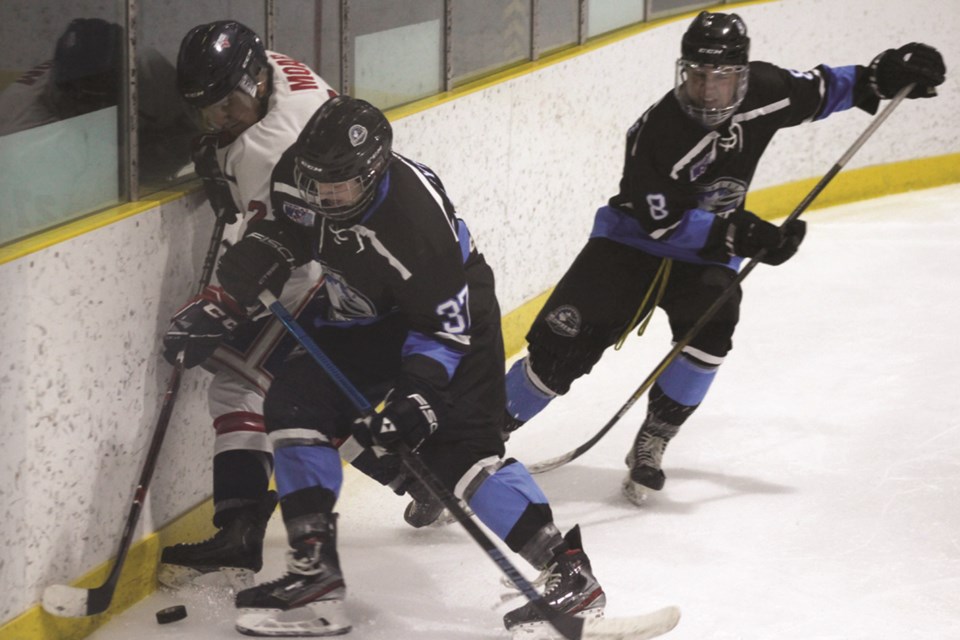 Serhii Pomanov and Raf Lambert Dodginghorse corner an Edson player while trying to get control of the puck during a 7-0 loss at home Feb. 8. Kevin Berger/BL

The Barrhead Bombers junior hockey team picked up a win against Cold Lake over the weekend, but are still winless against the Hinton Timberwolves and the Edson Aeros.

On Friday, Feb. 7, the Bombers travelled to Cold Lake and scored a 5-3 victory over the Hornets.

Throughout the first two periods, Barrhead and Cold Lake traded goals back and forth and headed into the third period with a 2-2 tie. Goals were scored by Oleksandr Davydenko and Carter Zawortny, with Riley Smith, Harley Pitura, Austin Stathdee and Serhii Pomanov contributing assists.

Then, after a final goal by the Hornets to start off the third period, Barrhead went on a scoring run and racked up three goals.

On Saturday, Feb. 8, the Bombers hosted the Hinton Timberwolves, who have a firm grip on second place within the Western States Hockey League’s (WSHL) provincial division.

Barrhead has had little success against Hinton this season, and once again, the Timberwolves’ offence was too much for the Bombers to handle..

The Timberwolves leapt out to a 3-0 lead in the first period, with Barrhead’s only goal coming within the first minute of the second period on a power play.

Crowchild notched the Bombers’ only goal, with Davydenko and Redcrow contributing assists.

Hinton fired back with two more goals in the second period and two more in the third to come away with a 7-1 victory.

On Sunday, Feb. 9, Barrhead hosted the top-ranked Edson Aeros for a home game at the Agrena. Barrhead is still searching for a win against Edson, though there have been a couple of games where they came close.

Victory would not come in Sunday’s home game, however. Though the Bombers held Edson to a 2-0 lead after two periods, the Aeros went full out in the third period and racked up five goals.

Throughout the match, Barrhead had trouble breaking through Edson’s defence, having to mostly settle for shots made from awkward angles or from half-ice.

On Feb. 14, the Bombers host the Hinton Timberwolves for another home game at the Agrena. Game time is 7:30 p.m.

Then on Feb. 15-16, the Bombers travel to Hinton for a pair of away games.