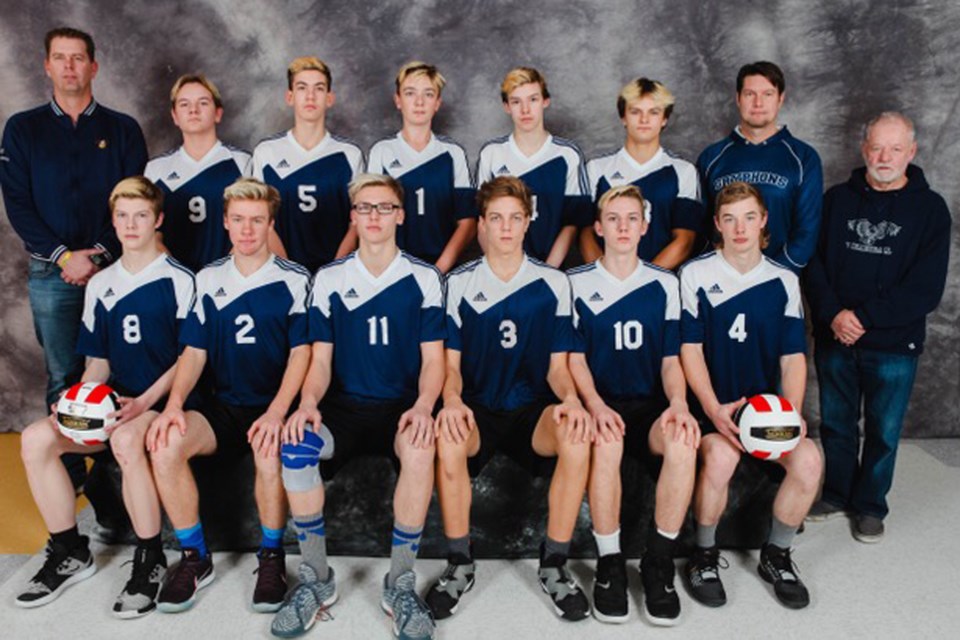 The Barrhead Senior Gryphons Boy’s Volleyball team came up just short of their efforts to three-peat.

The boys qualified by taking gold at the 3A North Central Zone qualifying tournament in Westlock the week prior.

The boys got off to a strong start defeating the host Magrath team 25-22 and 31-29 on the first day of the three-day tournament.

The next day, Barrhead met HJ Cody from Sylvan Lake in their second game of the round-robin and easily dispatched them in two straight sets, 25-15 and 25-10.

In their second game of the day, the Gryphons defeated the fourth seed Cochrane Cobras 25-19 and 25-20.

The win placed the Gryphons at the top of their pool and an automatic bye into the semi-finals where they would face Lethbridge College Institute (LCI), who finished the round-robin with a 2-1 record, qualifying for the semi-finals by defeating the Cochrane Cobras.

Head coach Rod Callihoo said he was extremely pleased with how well they played, singling out the semi-final against LCI in particular.

Going into the provincials Callihoo thought LCI was the team to beat.

“We have built quite a rivalry with them,” he said, noting in their two previous matchups, they split the series evenly.

“We got off to a good start and won the first set, but after that LCI tightened up defensively and got us off our game,” Callihoo said. “By the time we pulled our game back, we didn’t have enough time to recover.”

As for the future, the Gryphons Boys’ future looks bright.

Although they will lose four Grade 12s, next year’s squad will include seven returning players, including two starters.

“Having that consistency is important,” he said. “Yes we do have some good players leaving, but we have a lot of strong players returning and some good young prospects coming in.”

On the girls’ side, Barrhead qualified for the 3A provincials by going undefeated taking the 3A North Central Zone Championship tournament in Whitecourt, Nov. 15-16, losing only two sets in the process.

Unfortunately, the girls did not fare as well as the boys going winless in the Provincial Championships in St. Paul.

In their first game, the Gryphons faced the winner of the North East Zone, Holy Rosary High School from Lloydminister losing 25-19 and 25-11.

In their next game, Barrhead would face the South Zone champions from Medicine hat, going down once again in straight sets 25-26 and 25-22.

After a short two-hour break the Gryphons would take on the North West Zone representatives from Beaverlodge in their closest match-up of the tournament. After losing the first set 25-21, Barrhead would bounce back taking the second set 25-16 before losing 15-8.

In their final game of the day, an evening tilt against Edmonton Christian High School, they would lose in two straight sets 25-20 and 25-13.

On the last day of the tournament, Barrhead would face the South Central representatives Springbank Community High School from Springbank losing 25-16 and 25-23.

Coach Kyle Becker said, for the most part, the girls played well, but unfortunately their play wasn’t as consistent as it was in the qualifying zone tournament.

Although he wasn’t the way they wanted to end their season, he said the girls should be proud of what they accomplished.

“Sport is more than just about results. It is about being good people, having fun and enjoying coming to practice,” he said. “And that is what we did. I know I was happy coming into work each day knowing that I would get a chance to work with this group of young people.”