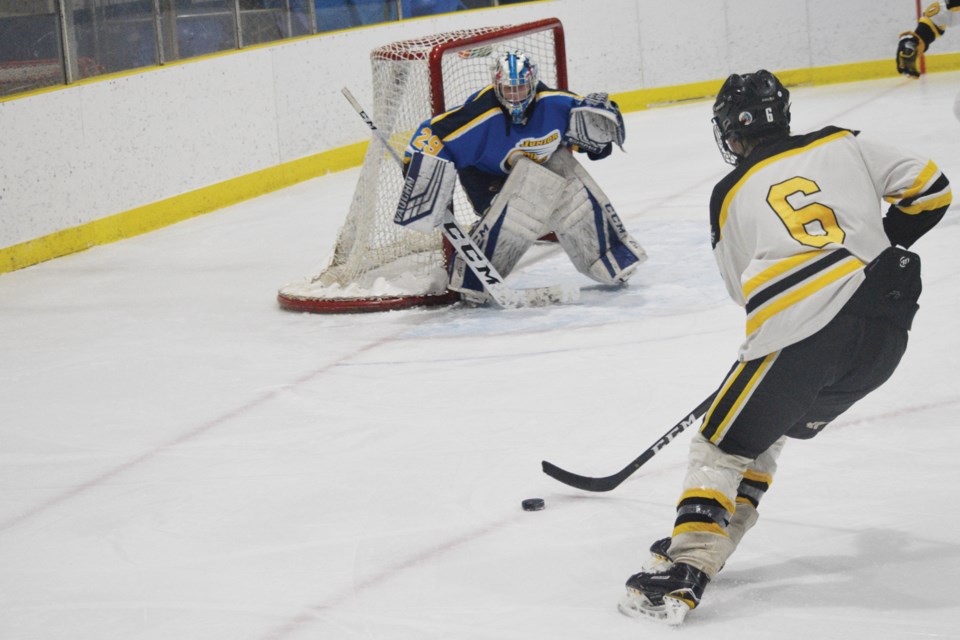 On Friday, Jan. 17, in the first of a home and away games the Midget Steelers tied the Fort McMurray Junior Oil Barons 1-1 at home despite holding a distinct advantage in both shots on net, scoring challenges and puck possession.

The Steelers also won two days later 3-0 on the road against Drayton Valley.

After a scoreless first period, where the Steelers outshot the Oil Barons 14-3, Barrhead got onto the scoreboard first just 10 seconds into the second frame on a goal by captain Brendan Bujold assisted by Colton Bondarchuck.

Barrhead had a chance to take the lead once again when Luke Szybunka had a couple of touches on the puck in front of the Fort MacMurray goaltender as time sounded.

In the third period, the Steelers, although they had their chances, were not able to capitalize on them and the game ended tie 1-1.

Head coach Glen Starman said more times than not with this type of performance would have had the Steelers going home with two points.

“Their goaltender [Nathaniel Lush] had a great game tonight. We almost doubled up on them on shots, but he kept them in there,” he said.

At the end of the game, Barrhead had a 37-26 advantage on the shot clock, however, it should be noted that many of Fort McMurray’s shots were from the perimeter and may not have counted as shots. Many of them might have been played by Barrhead’s starting goaltender Caleb Brouwer but might not actually been on the net while many of Barrhead’s shots were of the Grade A scoring variety including multiple breakaways, including four or five from Bujold.

“He just had his number tonight,” Starman said.

That being said, he gave the Junior Oil Barons full credit for staying in the game, noting they played much better than their record indicated.

Fort McMurray coming into the game record was 1-11-5.

“They played and were coached well,” he said.

It should be noted that although the Junior Oil Barons like the Steelers are both ‘AA’ Midget teams, they are a Tier II team while Barrhead is Tier I.

Starman noted that although both teams played very disciplined hockey with only nine minor penalties called in the game, five to Barrhead and four to Fort McMurray, two of the penalties late in the second period (one to each team) were of the type they both would have liked to take back.

Unfortunately for Barrhead, the Junior Oil Barons were able to capitalize on the man-advantage and the Steelers were not.

“That is what we keep trying to emphasize that a game is usually decided by only one or two goals and it is little mistakes that end up with the puck being fished out of your net,” he said.

The good news is, Starman said, the team game after game continues to progress, noting the game against Fort McMurray was their eighth straight game without a loss.

Auto parts pro now a golf pro
Sep 15, 2020 2:30 PM
Comments
We welcome your feedback and encourage you to share your thoughts. We ask that you be respectful of others and their points of view, refrain from personal attacks and stay on topic. To learn about our commenting policies and how we moderate, please read our Community Guidelines.