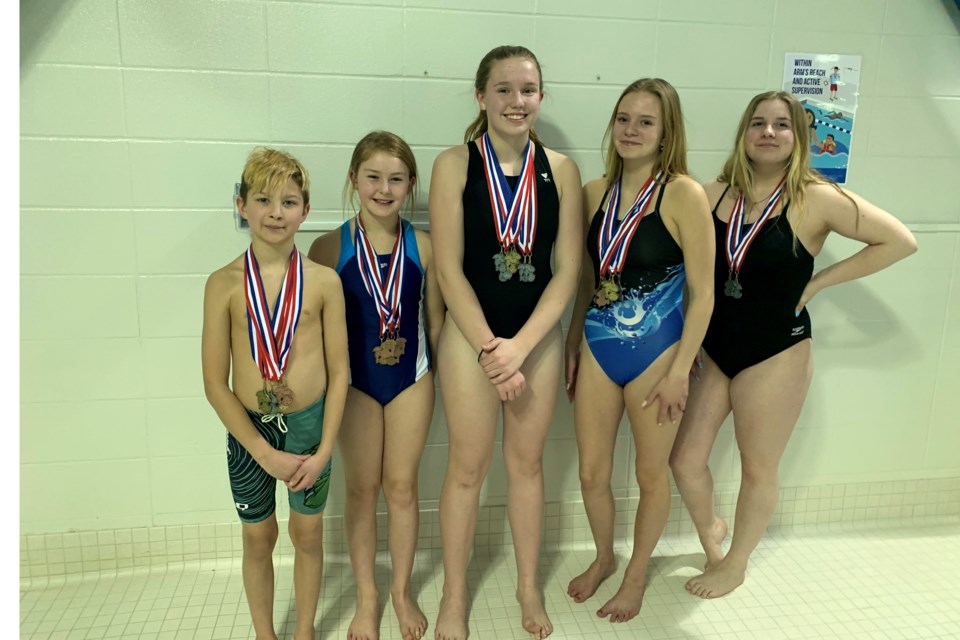 Members of the Barrhead Swim Club pose with the medals they earned at the Cookie Classic in Ponoka after practice at the aquatics centre on Jan. 23. Although the Ponoka meet was held in December they did not receive the medals until recently. From left: Kyler Demske, Brooklyn Kramm, Sydney Miller, Samantha Hallock and Ashlee Laing. Photo courtesy of the Barrhead Swim Club

BARRHEAD - The Barrhead Swim Club did not need a metal detector to find metal at the MacEwan University pool in Edmonton.

The meet was the second of two meets the club hosts. The bulk of the Barrhead Swim Club attended the first event.

Two swimmers, Sydney Miller and Kyler Demskie, accounted for the bulk of the medal haul, taking 11 of the 12 medals.

Duncan Wild, competing in the 2004 male category, took bronze in the 50-metre backstroke, in which he also recorded a personal best time. Wild also competed in the 50-metre freestyle, breaststroke and butterfly finishing seventh, eighth and eighth place respectively.

Pamela Laing, a swim club member, said they can’t be more pleased with the progress the club has made this season.

“We just did fantastically. We just keep progressing week after week,” she said, adding so far the club has competed in about six meets.

About another six remain, including one in Sherwood Park last weekend. As of press time, meet results have not been posted.

This is the club’s third year back after a four-year hiatus caused by the closure of the old aquatics centre. In the first two years, the club sponsored two programs competitive and non-competitive.

This year due, to the club eliminating the non-competitive stream, its membership has been reduced from about 50 to 23.

In a past interview, the club stated one of the reasons why they decided to go to the competitive stream only is so that its members have an opportunity to qualify for the provincial championships for winter clubs.

To qualify for the championships, swimmers must hit certain times during a sanctioned meet.

“We haven’t quite got there, but two of our swimmers [Demskie and Miller] are very close,” Laing said, noting they will likely meet the standard in the next few weeks.

However, she said that if they don’t, it isn’t the end of the world because they have two weeks before the provincials which are in March, to reach the standard.

Other club members participating include Ashlee Laing and Sarina Strydhorst.