The Barrhead Swim Club (BSC) is taking a new direction this year. For the first time in several years, the swim club’s executive has decided to focus solely on competitive swimming.
0
Nov 19, 2019 12:01 AM By: Barry Kerton 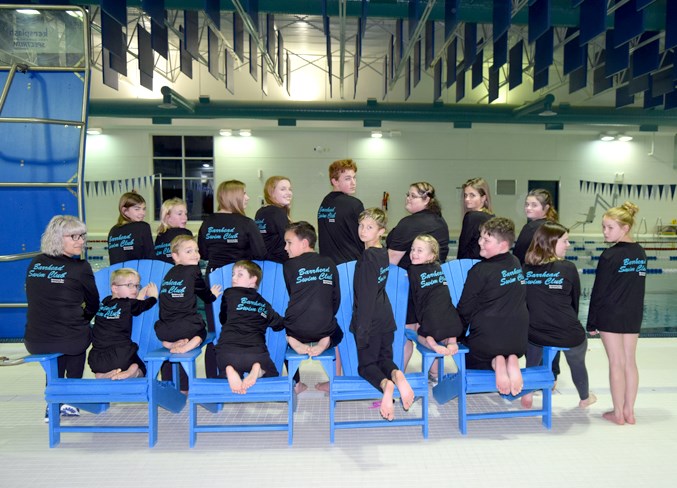 The Barrhead Swim Club show off part of their new uniforms which were made possible due to a donation by the local Elks chapter.

The Barrhead Swim Club (BSC) is taking a new direction this year.

For the first time in several years, the swim club’s executive has decided to focus solely on competitive swimming.

That was what swim club vice-president Sandy McCarthy and treasurer Pamela Laing told the Barrhead Leader before the club’s Nov. 14 practice.

The Leader popped by the practice for the unveiling of the club’s new uniforms that were purchased with a $2,000 donation from the Barrhead Elks.

McCarthy said that for the first two years after the club returned from a hiatus due to the closure of the old aquatics centre, they decided to have two streams: competitive and non-competitive.

“What we found the last year was the competitive swimmers were not getting enough instruction,” McCarthy said.

Out of the about 50 members last year, 30 were in the non-competitive stream. This year the club has 23 swimmers from eight to the older teens.

Because of the extra attention the competitive swimmers are getting McCarthy and Laing said their swimmers can enter into events they would have never considered before.

“This year we are working on building up their strength and endurance,” McCarthy said, adding this year, the older swimmers are swimming 400 metres as a warm-up.

As a result of the extra endurance, several more swimmers are deciding to tackle the longer distances.

For example, McCarthy noted all the swimmers who competed at their first meet, the Penguin Swimming Club at MacEwan University in Edmonton on Nov. 2 entered a 200-metre distance.

“Last year we just did mostly 100-metre events,” she said.

McCarthy added it was a difficult decision for the board to become a competitive club only, but they felt if they did not, they were not doing the swimmers justice.

“Our eventual goal is to have swimmers qualify provincials,” she said. “We haven’t had a child qualify for provincials for some time.”

Laing added the board also felt there were other options for swimmers that were in the previous non-competitive program, such as swim lessons which are provided by the aquatics centre.

She also noted when the swim club first formed for many years they only had the competitive stream.

To compensate for the loss of revenue from the non-competitive group, BSC reduced the number of lanes they were renting from the town from five to two.