Volleyball is up and running at Boyle School for all of the junior and senior high teams and it looks to be a busy next couple of months for players and coaches.
Sep 21, 2010 12:00 AM By: Town And Country Today Staff 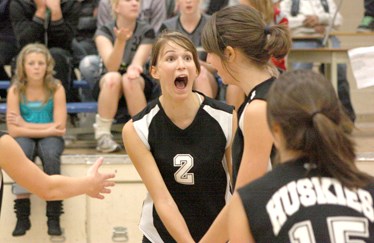 Volleyball is up and running at Boyle School for all of the junior and senior high teams and it looks to be a busy next couple of months for players and coaches.

The senior boys and girl’s volleyball teams played this past weekend in the season’s first tournament at Portage College, but the results weren’t available at the time of press.

The Portage tournament is the one of many volleyball tournaments that will be held in around the Boyle region this season.

“Basically we are just getting started and it should be a great year for all of our teams,” exclaimed Gary Thompson, head coach of the senior boys’ team.

Like the Edwin Parr Composite (EPC) Pacers and Angels, the Huskies aren’t part of a sanctioned league so all of the school teams will play in tournaments to determine their ranking.

Boyle School will host its first tournament of the year this Friday and Saturday with both the senior boys and girls playing against opponents from Grassland, Plamondon and other area communities.

The senior girls will try and defend the title of zones’ champions they achieved last year, while the boys will put a very young and eager team to the floor this season.

“We’ve got some young and a lot of first year talent on this year’s team,” explained Thompson, who enters his fourth year coaching the senior boys’ team.

Although the team may not have as much experience as last year’s did, what they lack in real game experience they more than enough make up for it in enthusiasm and athleticism said Thompson.

“They’re very dedicated and we’re out there to have some fun and play some good volleyball,” he said.

All of the team’s seasons will end in mid-November, culminating with zone championships.

Shooting for the win is always a goal in any type of sport, but it’s getting as much play time as possible for the young players that is of the utmost importance.

“It’s really important that when we go to tournaments we get a lot of games in. It’s a good bang for your buck,” added Thompson.

Boyle School will host the senior girls’ zones on Nov. 20, while the Husky boys will travel to Westlock to compete in their respective zone finals.

The junior boys and girls’ will also compete in several tournaments throughout the year, finishing with the Aspen View finals in early November before ending with zones in mid-November.

Boyle School is also currently trying to organize three mini tournaments for the junior teams that will be held at the Athabasca Regional Multiplex.

“We are organizing three mini tournaments with other schools in our area that will be held during the week throughout the season,” explained Thompson.

Getting the younger students involved is the main goal.

“Our whole goal for the junior high teams is maximum participation.”

For more information on the game time for this weekend’s volleyball tournament in Boyle contact the school at 780-689-3647.