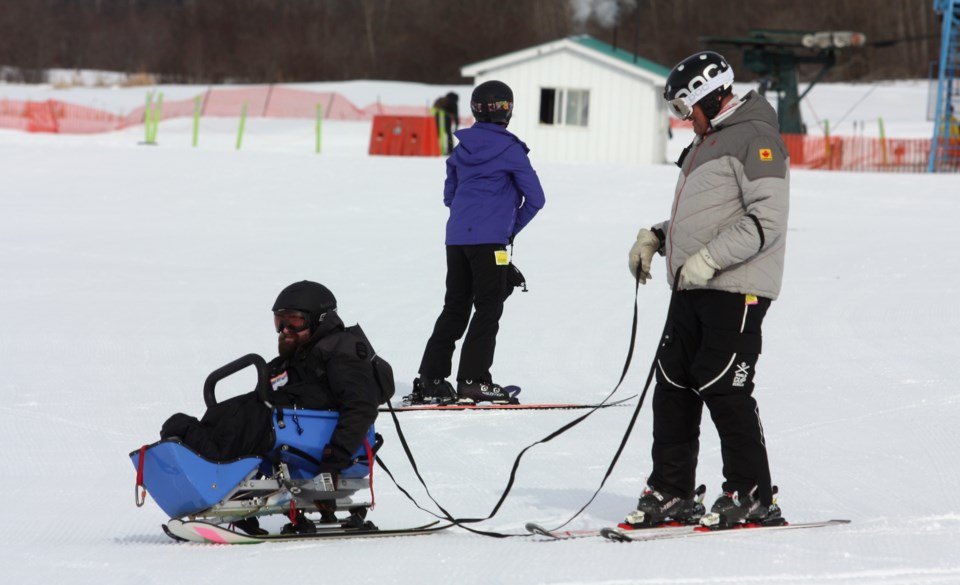 Matt Steinbring glides to a stop on a sitski with CADS volunteer Les Puskas not far behind, following his second run down the slopes at Tawatinaw Valley Ski Hill March 7 during CADS Alberta's 'Slide & Ride' event. Chris Zwick/WN

WESTLOCK - When Matt Steinbring visited the Tawatinaw Valley Ski Hill as a junior high student, he sat in the chalet, which was fun to a point, but he never got a chance to hit the slopes himself.

At that time, there was no driving force focused on giving would-be athletes that are also disabled, the chance to take part in such sports.

Steinbring remembers he did get to go for a ride behind the skidoo on a toboggan, which was also fun, but it just wasn’t the same as the feeling of freedom and connection with the outdoors one gets from looking downward from atop a large hill and letting go.

Fast forward nearly 15 years later and Steinbring took a seat on a sitski for the first time and was just minutes away from heading up the hill.

Steinbring was one of eight participants as representatives and volunteers from Canadian Adaptive Snow Sports (CADS Alberta) were at the Tawatinaw Valley Ski Hill March 7 for a ‘Slide & Ride’ event to give these individuals a chance to experience the rush of downhill skiing.

“It’s an awesome event and hopefully it goes on forever,” said Steinbring, following his second run down the hill with CADS volunteer Les Puskas, who came all the way from Red Deer to volunteer.

Steinbring was a natural. He graduated from the bunny hill on his first run and went up even higher for his second descent.

“The mandate of CADS Alberta is to really reach different regions of the province than have traditionally been reached,” said Ozzie Sawicki, the program director for CADS Alberta. “We need to grow the opportunity for people with adaptive needs to have access to winter sports and recreation all over the province.

The Tawatinaw ‘Slide & Ride’ was the fifth and final of the season for CADS, which put on similar events in Cold Lake, Grande Prairie, Red Deer and Medicine Hat earlier in the year.

The end game is to try to coordinate the opening of CADS Alberta chapter for the Tawatinaw region that will include Westlock, Athabasca and surrounding areas.

“They’ll often start as a small group of people that will start the initial program. We’ll help supply the initial equipment to get things rolling. The ski area becomes a partner in the process,” said Sawicki.

“It’s a matter of getting someone to take the reins and be the administrator for this zone. As CADS Alberta, with the smaller zone, we’ll work hand-in-hand to try to help them in terms of ensuring the things they need to have to run a program.”

Chapters are popping up across the province.

“The uptake is there and the interest is there. The ball is in our court to make sure they have the resources they need,” said Sawicki.

Allison Johnson is a director with the Westlock Accessibility Coalition, who was also at the ski hall Saturday.

“We want to make a zone with Athabasca, Westlock and Sturgeon together and that way we can have this program here to give to the locals who might want to try this out for their children,” she said, adding she would also like to see a shuttle service travel to the hill from Westlock, to provide even greater access.

With the interest shown last weekend, the formation of that group isn’t long off.

“I’m thrilled that there is interest from the community,” said Sawicki.