Football is a game of inches, and the Edwin Parr Composite School Pacers were taught exactly why that is Thursday night in a tough 28-14 loss to the Westlock T-Birds.
Oct 12, 2010 12:00 AM By: Town And Country Today Staff 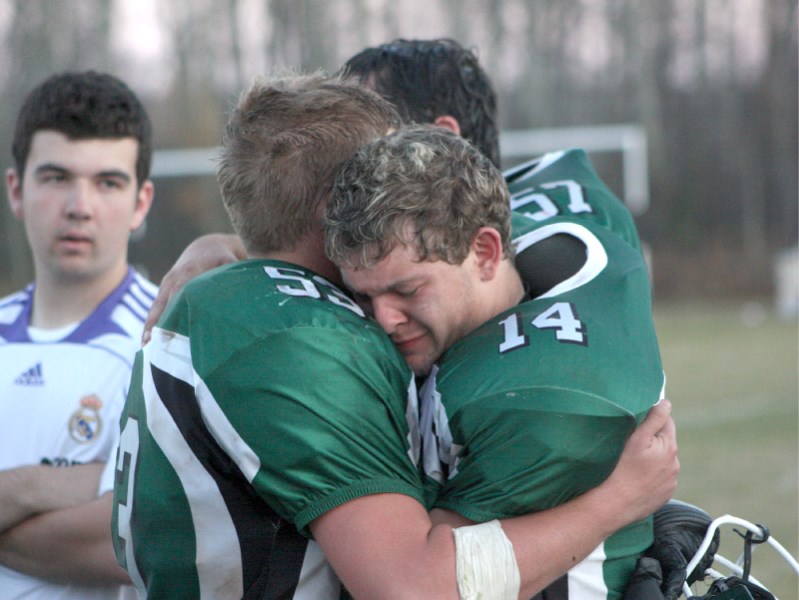 Football is a game of inches, and the Edwin Parr Composite School Pacers were taught exactly why that is Thursday night in a tough 28-14 loss to the Westlock T-Birds.

In the EPC Pacers final home game of the year, costly turnovers were the Pacers’ achilles heel, and ended up eliminating the team from making the playoffs this season.

The loss dropped the Pacers’ regular season record to 0-4.

“We came out ready to play in the beginning and we had a good start, but unfortunately we started to tire,” explained head coach Pete Burden.

On an unseasonably warm October evening, the Pacers and T-Birds locked horns in what was mostly a defensive battle from start to finish.

The first half belonged to the Pacers’ offense and defense.

Halfway through the first quarter, the Pacers struck with a rushing touchdown by quarterback Cole Griffiths to make it 7-0.

The Pacers’ defense stifled the rushing attack of the T-Birds in the first quarter, holding them to minimal gains.

After several punts by each team, the Pacers’ offense struck again on the ground in the second quarter with a big touchdown run by running back Jessie Snow to give the Pacers a comfortable 14-0 lead.

The T-Birds continued to try to run on the Pacers’ defense in the first half, but to no avail.

The second half started similarly to the first, with the Pacers controlling the time of possession and limiting Westlock’s offense to small gains.

Westlock’s passing game was non-existent for most of the game, until an interception shifted the momentum in favour of the T-Birds.

After the turnover, the T-Birds finally were able to produce on offense with a big run from their running back to make the score 14-6.

Westlock decided to go for two and cashed in to make it 14-8 in favour of Athabasca.

Once again, a costly turnover ended up hurting the Pacers on the scoreboard.

After a muffed punt was recovered by the T-Birds, they were able to run in another touchdown to tie the game at 14 a piece.

The Pacers kept the score tied at 14 by blocking the extra point.

Early in the fourth quarter, after turning the ball over on downs, the T-Birds had their easiest play from scrimmage turn into the eventual winning score. The T-Birds’ running back scampered for another touchdown run to give Westlock a 21-14 lead.

Late in the game, the Pacers valiantly tried to get a drive going, but a fumble ended any hopes of a late-game comeback.

Westlock was able to take advantage of the turnover and turn it into seven points. On the next play, Westlock handed the ball off and 30 yards later, their untouched running back was in the end zone for the final nail in the Pacers’ coffin.

“We were definitely the more skilled team, but the only difference is the fact that they had so many more bigger guys than we did and were able to rotate them in and out,” noted Burden.

A lack of size has been a major problem for the Pacers all season long, and it eventually was the reason the Pacers couldn’t hold onto the lead.

“We only had a few big guys, who had to play both sides of the ball for most of the game, and they started to tire. So we had to put some of our young guys in and we made some mistakes here and there and it cost us,” said Burden.

For several of the Grade 12 Pacers, the blown lead hurt even more as it will be their final chance to win on home turf in their high school career.

The Pacers will now finish off their season in a crossover game against Vegreville this weekend. The location or time of the game isn’t known at the time of press.

A lack of size on both sides of the ball and especially on the defensive side of the ball, didn’t allow the Pacers to be able to take control of most games, but the improvement from the team’s young players was immense, said Burden.

“There was a huge improvement from our younger players from start to finish.”