R.F. Staples School’s Josef Pidsadowski gets a good look at the ball during the T-Birds bronze medal game against Barrhead during the Pembina Hills Divisional 7/8 Volleyball Tournament Nov. 5 at the Rotary Spirit Centre.
Nov 12, 2019 12:07 AM By: Chris Zwick 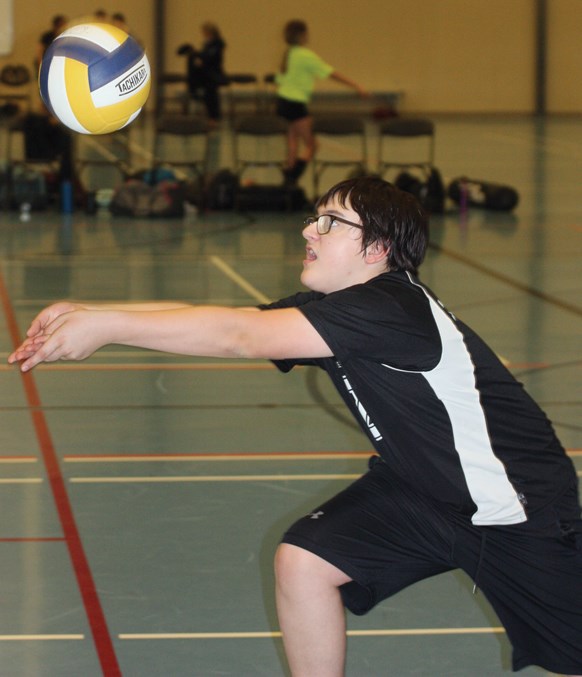 R.F. Staples School’s Josef Pidsadowski gets a good look at the ball during the T-Birds bronze medal game against Barrhead during the Pembina Hills Divisional 7/8 Volleyball Tournament Nov. 5 at the Rotary Spirit Centre.

R.F. Staples School’s Josef Pidsadowski gets a good look at the ball during the T-Birds bronze medal game against Barrhead during the Pembina Hills Divisional 7/8 Volleyball Tournament Nov. 5 at the Rotary Spirit Centre.

After a full day on the court, the best Grade 7/8 volleyball teams from across the school division were named and if their enthusiasm for the sport is any indication, the sport is in good hands for the future.

After a hard-fought round robin, and a couple playoff games later, the boys and girls teams from St. Mary each earned silver medals to finish off the volleyball season for 2019. The girls team from PNCS also earned a bronze medal for their efforts, while the boys team from R.F. Staples came up just short of the bronze in their competition.

Swan Hills ended up winning the boys side, while NPCS took home the gold on the girls side.

The teams played a version of the game called tripleball, which allows players to develop introductory volleyball skills while still taking part in competitive games.

A coach literally throws the ball over the net to a player who is then able to set up their teammates to complete three hits before the ball goes into the opponent’s’ court. Players are also given opportunities to serve the ball as well.

After four round robin matches, the St. Mary boys finished first in their pool, defeating teams from Fort Assiniboine, Barrhead Composite, CCRS and PNCS. Barrhead and PNCS placed second and third in their pool respectively.

In the other boys pool, the Swan Hills team finished first, while R.F. Staples placed second and NPCS third. On their way to the playoffs, the R.F. Staples team lost to Swan Hills, but defeated NPCS, Barrhead and Eleanor Hall School.

The boys team from Clyde was unable to collect a win in their four games and bowed out before the playoffs began.

On the girls side, Eleanor Hall placed third in their pool after beating Barrhead and Fort Assiniboine and then splitting their two-set matches with NPCS and Swan Hills.

In the other girls’ pool, PNCS placed first, St. Mary second and R.F. Staples third beating out CCRS and two teams from Barrhead, to make their way into the playoffs.

In the end, the St. Mary girls took on NPCS in the final, but were unable to come away with the gold. The team from PNCS was able to win their final match though, securing the bronze medal.

The St. Mary boys also played in the gold medal game, against Swan Hills, but were also unable to come away with the gold and settled for silver instead. R.F. Staples took on one of the teams from Barrhead, but came up just short of the medal.