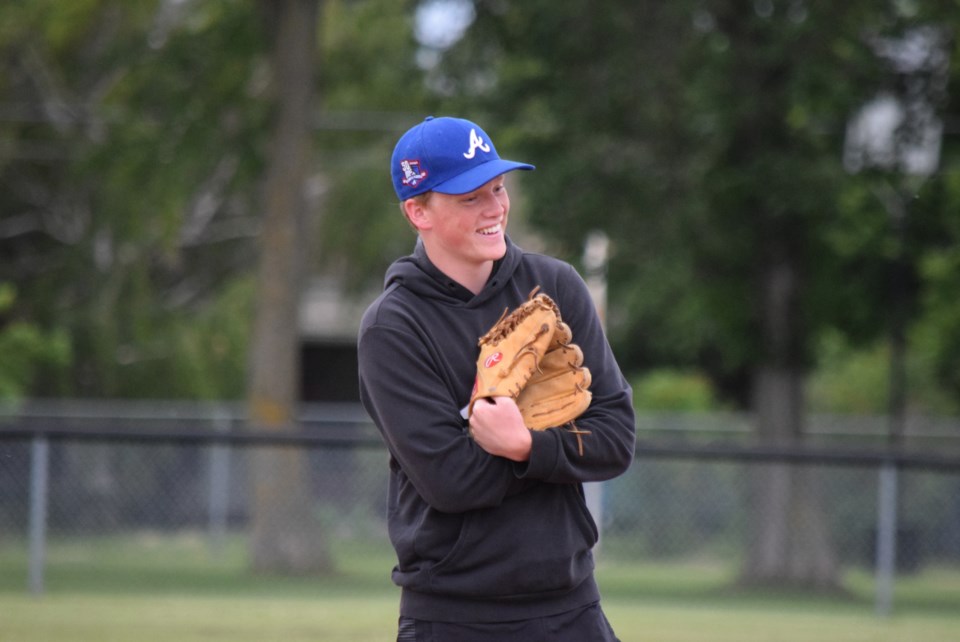 Unfortunately there wasn't enough interest at the older age levels to field a team. However those older players such Nathan Vanderwekken served as assistant coaches and mentors for the younger players. Here Vanderwekken is overseeing the pitchers of a July 9 game. Barry Kerton/T&C

BARRHEAD-The Barrhead Minor Baseball Association (BMBA) has managed to save the season at least in some small way.

Starting on June 7, a group of baseball players, took to the field for the first time in more than a year to take part in a modified tournament.

The softball tournament will see teams practice and play games every Tuesday and Thursday for the rest of July featuring three-mixed six-player teams at most age levels as part of Baseball Alberta's AA program. The teams will play each other in a round-robin style tournament.

At first, it did not look like the association would be able to host baseball games as Baseball Alberta, the umbrella group that sanctions organized youth baseball in the province, announced they had delayed any decision on a potential season until September, due to the coronavirus and the accompanying public health restrictions.

However, in early June, Baseball Alberta, in conjunction with the province its initiating Stage 2 of its economic COVID-19 relaunch plan, they announced its efforts to help associations resume operations under its "Return to Train" plan.

Unfortunately, BMBA president Mike Roszko said the plan was too restrictive to meet local players' needs, so they decided to investigate the possibility to play under Softball Alberta's banner which the association felt had more attainable guidelines and restrictions.

In the meanwhile, Baseball Alberta released a revised plan which the BMBA felt they could meet. The association then conducted a poll of its members to see how many players would be interested in playing in a modified season.

Sadly, the association does not have enough players to field teams in all age groups. For example, in the 11U and 13 U categories, registrations fell short, but Rozsko said they have applied to participate in Baseball Alberta's cohort registry so players in those age groups will be able to games against teams from other communities if the opportunity arises.

He added they also there wasn't enough interest in the association's oldest category, 18U, there also wasn't enough registrants but said interested players will help coach and mentor younger players and possibly like the 11 and 13 U categories, and play against other communities in cohort play.

"All activities will incorporate contact tracing, pre-screening, sanitization and social distancing protocols mandated by Baseball Alberta," Roszko said. "Some of the changes people may see include things like no dugout usage, no sharing of helmets or catcher gear, sanitizing bats between every hitter, spacing of players and spectators, utilizing face coverings where appropriate."