Lisa vs. the river 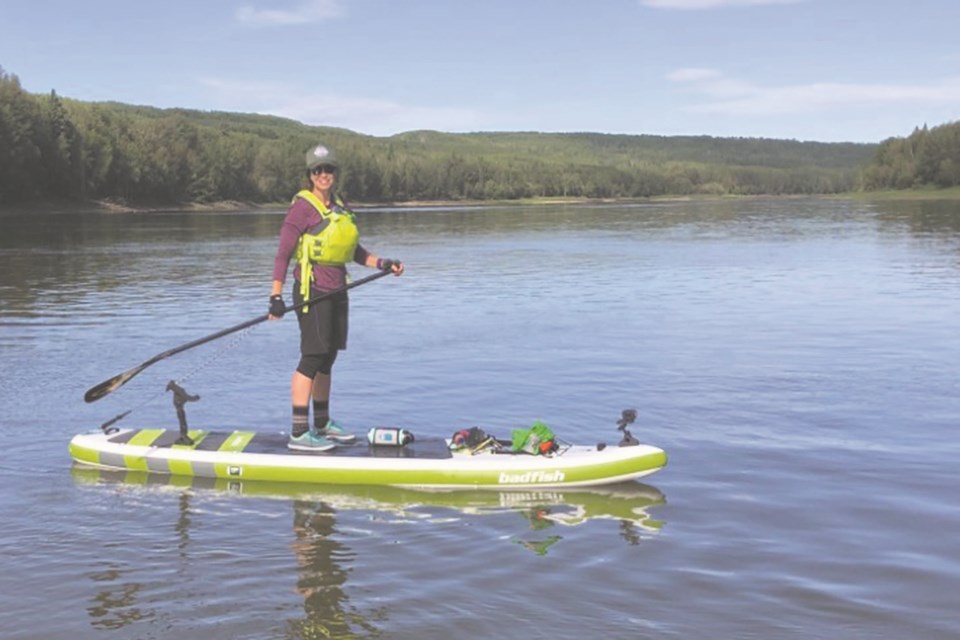 Experienced paddle boarder Lisa Stocking made her way 196 km down the Athabasca River between Aug. 26-28, spending 21.75 hours on her board between Poacher’s Landing and the Grand Rapids just west of Fort McMurray. Submitted

ATHABASCA - Floating down a stretch of river on a nice sunny summer Saturday can provide moments of peace, serenity and clarity for anyone who may be searching for such things, but for Lisa Stocking, it presented quite a challenge as well.

Stocking completed a three-day journey down the Athabasca River Aug. 28, starting at Poacher’s Landing, north of Al-Pac the previous Wednesday, and nearly reaching the Grand Rapids, just upstream from Fort McMurray by Friday, spending 21.75 hours in total, mostly standing, on a paddle board, for 196 km.

"I always wanted to paddle on this river because it looks inviting to me,” she said in an interview down by the river last week.

She had paddle boarded the Athabasca previously, but not nearly the distance she covered on her last trip.

“Why does anybody do anything? I don’t think anybody has paddle boarded it. I think that was the first.”

A lot of people tell her the river is too dangerous for such endeavours, but if one has the experience, takes into consideration all the different risk factors and has done their due diligence in preparing for them, it’s not that dangerous at all.

Along with wearing the proper personal protective equipment, Stocking also mapped and timed her adventure out, did research on how high the river was at the time and how it flows in different areas. She also made sure she knew what the weather was going to be like, and was prepared mentally and physically for the challenge. Husband Trevor was also in a nearby jet boat in case of any emergencies.

“You are safe on this river, this is a very tame river, unless you are really negligent. Ignorance can kill us,” she said.

Stocking is a personal trainer by trade, but the coronavirus pandemic shut down her business earlier this year, affording her the time to train with experienced boarders on the Kananaskis River, which is a white-water river descending from the Rocky Mountains. She also has her flat-water paddle boarding certification and is working on her river certification.

She did the majority of her 200 km journey on the first day.

“Then we camped on a beautiful island and we slept on the boat. It was wonderful. It was awesome,” Stocking said, adding that although she was sore the next day, she felt great and had a second wind to push through to her destination.

There was a lot going on in her head as she paddled, including an appreciation of the history of the Athabasca River, which played a huge role in the development of northern Alberta in the last 250 years, and long before that.

“When I was paddling, the whole time I was thinking about people in scows right here, and what they went through. It was very humbling,” she said.

It was a journey Stocking won’t soon forget, and as her skills grow, she could very well do it again.

“I just did it for my own personal journey in paddle boarding. You always learn every time you get out on the water. The last day, I could have kept going. You just get into a groove out there,” she said.