A university-level hockey forward will return home to Calling Lake Sept. 23 when his team plays in the community as part of the Athabasca College Hockey Challenge.
Sep 20, 2018 2:29 PM By: Bryan Taylor 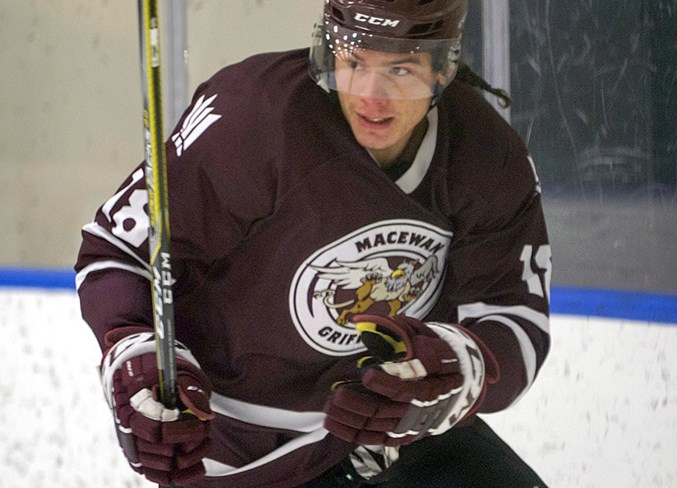 Nakehko Lamothe plays for the Grant MacEwan University Griffins. The 23-year-old forward, who hails from Calling Lake, will accompany his team to his home community Sept. 23, where the Griffins will play against the University of Alberta-Augustana Vikings.

A university-level hockey forward will return home to Calling Lake Sept. 23 when his team plays in the community as part of the Athabasca College Hockey Challenge.

Twenty-three-year-old Nakehko Lamothe plays for the Grant MacEwan University Griffins, having first joined the team as a walk-on in 2016. The team’s game against the University of Alberta-Augustana Vikings will go at 2:00 p.m. at the community’s Jay Bird Memorial Arena.

Lamothe said he first became interested in the sport back when he was four years old.

“I love playing hockey, it’s always the best,” Lamothe said. “In Calling Lake, everyone plays hockey, and I lived beside the area growing up. All I had to do was walk over to play.”

Originally, Lamothe said he was supposed to play hockey for Keyano Collage in Fort McMurray.

“But the team ended up folding at the college,” he said. “So instead, I ended up going to Grant MacEwan instead.”

After starting in Calling Lake, Lamothe said he moved to Edmonton to play at the Bantam level.

“I played for the Southside Athletic Club and the Knights of Columbus Pats, both in Edmonton,” he said. “I then played at the junior-A level, first in Alberta with the Drayton Valley Thunder, then in Manitoba for the Opaskwayak Cree Nation Blizzard near The Pas, and finally for the La Ronge Ice Wolves in Saskatchewan.”

Outside of hockey, Lamothe is currently majoring in psychology, with a minor in earth and atmospheric sciences. He added juggling school and hockey together is all about time management.

“It’s a skill you get good at, and become more disciplined at,” Lamothe said. “Just like any other skill, you just have to keep working at it.”

His coach, Mike Ringrose, said he gets really high marks in school, and is a really special kid.

“He is a great ambassador for his community, and for the Indigenous community,” Ringrose said. “Last year, we had a group of children up from Calling Lake, and put them through a day in the life of a Griffin. Nakehko took the lead, and arranged most of the event.”

After the hockey season, Lamothe said he always returns home to Calling Lake. During the summer, he said he is part of a work-out group that helps train children in Calling Lake in a fitness program aimed specifically for hockey.

“It’s for any child who wants to commit five days a week,” he said. “We pick up the kids, and we train them to eat properly and keep fit. If they are not committed, we do not kick them out, we just do not pick them up.”

Unfortunately, Ringrose said that although the team will be in Calling Lake, Lamothe himself will not be playing on the ice.

“He blew out his knee during practice, it was just bad timing,” he said. “Unfortunately, he will be out of commission for the next six to eight weeks in order to heal.”

But despite being on the injured list, Lamothe said he still plans on being with his team for the tournament.
“I’ll still be around during the games in my crutches watching them,” he said. “Outside of the games, I will probably just be at home visiting my family and friends.”

He said the people of Calling Lake are like family to him, and that still hangs out with them during the off-season.

“When I am in Edmonton, I live with people who are from Calling Lake,” Lamothe said. “I am very much attached to my community, and it will always be home.”

He said he also keeps in touch with his former coaches who are from Calling Lake.

“They are not just your coaches, but they are you friends as well,” Lamothe said. “They are friends with your parents, you see them in the community, and you never forget the contributions they have made as you advance in the sport.”

Lamothe said that if he had a choice of which NHL team he would play for, it would likely be the Montreal Canadiens.

“I have always been a Habs fan,” Lamothe said. “I love the history that goes with the team, and they usually have a pretty good team. They were also the last Canadian team to win the Stanley Cup.”