Masterful performace put on by cast of bantam 'AA' Hawks

The Athabasca bantam ‘AA’ Hawks had their full roster of 10 skaters for the first time in over five weeks, and it definitely showed not only on the ice but on the scoreboard.
Dec 14, 2010 12:00 AM By: Town And Country Today Staff 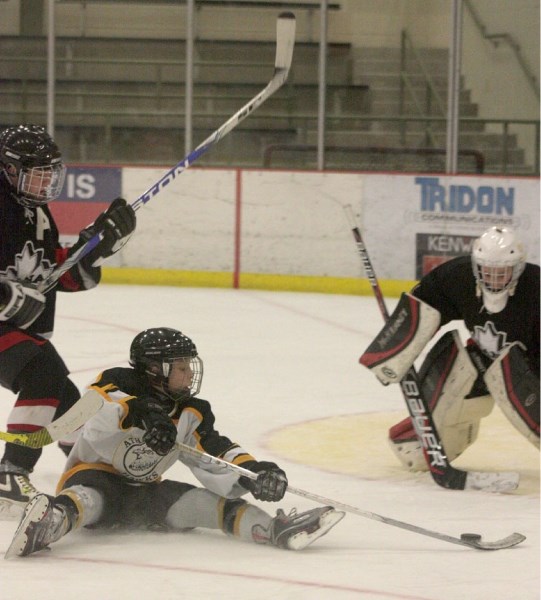 Josh Payuk of the Athabasca bantam &#8216;AA&#8217; Hawks does his best to get the puck on the Whitecourt Leafs net while on the seat of his pants during a 9-0 home win Saturday night

The Athabasca bantam ‘AA’ Hawks had their full roster of 10 skaters for the first time in over five weeks, and it definitely showed not only on the ice but on the scoreboard.

The Hawks faced off against the Whitecourt Leafs during the late afternoon Saturday at the Athabasca Regional Multiplex and took it to the Leafs in a dominating 9-0 winning performance.

“It was definitely nice to have 10 skaters again, and if we can have 10 skaters for the rest of the season, things are looking pretty good,” explained Calvin Klaczek, head coach of the bantam ‘AA’s.

Hawks’ goaltender Robbie Mason wasn’t as busy, but he was still able to turn away 37 shots for his second shutout of the season.

Athabasca got off to a quick 2-0 lead in the first period and entered the first intermission well in control, outshooting Whitecourt 20-7.

The second period was much of the same for the Hawks, as the skilled team continued to pressure the Leafs all over the ice, resulting in two more goals by the end of the second period. If it weren’t for some amazing saves by Richmond, the Hawks lead could have easily been 6-0 or 7-0.

Knowing their objective right from the start and adjusting to different game situations is one of the bantam ‘AA’s biggest strengths so far in this short season, said Klaczek.

“What’s nice about this team is that the guys really listen. In the first 13 minutes of the game they were great, but after, they started to play a little individualistic so I talked to them at the start of the second and they went back to hustling and passing the puck really well,” he said.

By the end of the second the Hawks had put 45 rubbers on Richmond.

The third period was the icing on the cake for the Hawks as they put five more pucks past Richmond to capture their sixth win of the season.

In the last couple of weeks, the Hawks have won two close contests with eight skaters or less.

According to Klaczek, his team’s character is the reason they are having such success thus far this season.

“It doesn’t matter what happens to these guys. They keep going and they don’t give up,” he exclaimed.

Athabasca’s never-die attitude has allowed them to stave off fierce comeback efforts by their opponents in one-goal games and given them the extra edge when they’ve come back several times this season.

“We really dig deep every game. They forecheck, backcheck and hustle hard all game,” said Klaczek.

The amount of work ethic the bantam ‘AA’ Hawks show week in and week out makes coaching very enjoyable.

“I love coaching this group of guys. They’re really a great bunch,” he exclaimed.

Thanks to Saturday’s win over Whitecourt, the bantam ‘AA’s pushed their regular season record to 6-1, totaling 12 points. Athabasca currently sits in first place, four points ahead of their nearest competitor.

The results from Sunday’s home affair against Jasper was unavailable at the time of press.

Athabasca will head to Edson this Saturday night before returning home for a game against Slave Lake on Sunday afternoon.