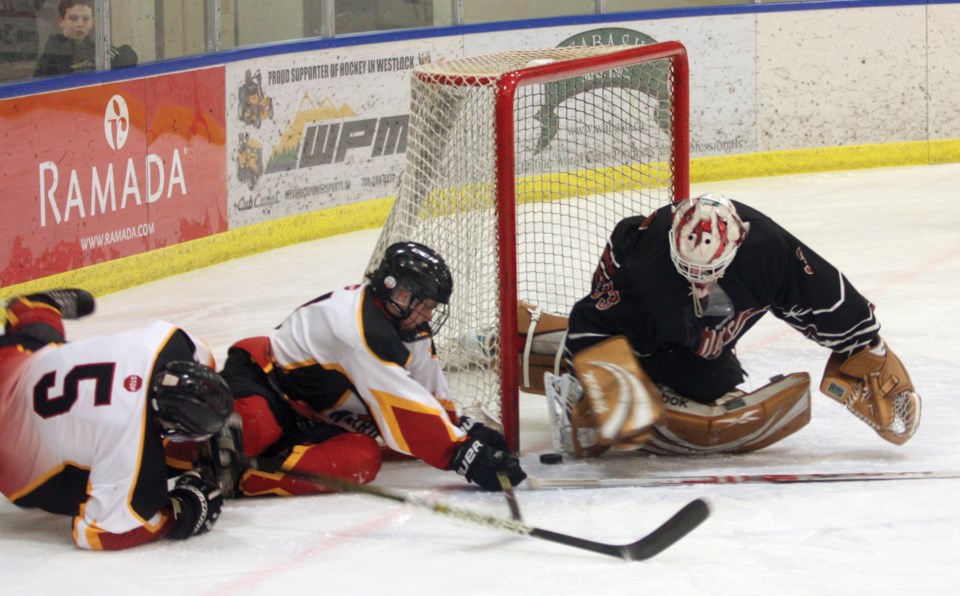 WESTLOCK - The Westlock Midget Warriors came back in a big way in the second game of their semifinal home-and-home series with the Redwater Rush last weekend, even after losing the first game of the series on the road.

The Warriors are now off to the Northern Alberta Interlock League finals March 13-15 against the CR Knights, out of Rivière Qui Barre. The winner of that best-of-three series will then move on to Tier 3 midget provincials in Grimshaw March 26-29.

Kasyn Pipke scored the only Warriors goal in a 2-1 road loss to the Redwater team in Game 1 March 6, which put the Warriors on their heels heading into Game 2 at the Rotary Spirit Centre the next day. The combined score of the two games would determine the winner, so the Warriors had to win by at least two at home to advance any further.

In Game 1 they had to fight for every inch of ice, said coach Gil Dubrule, but they put on a stellar offensive performance in Game 2 that saw them rout the Rush 11-6.

“It seems like both teams decided to play a wide open game and unfortunately for Redwater, their goaltenders didn’t play as well as they had in the past, which cost them,” he said.

It didn’t help that the Warriors were hungry and scored two goals, courtesy of Kasyn Pipke and Keenan Fortier, in the first two minutes of play. Redwater then scored their first at the midway point of the period, followed by another Warriors goal by Evan Brost.

Despite taking a quick lead, Redwater responded and tied the game up at three before the frame ended.

Then came the second period though and the Rush were dead on their feet. Their single goal in the period was no match for goals from Brenden Gerig, Jaxson Snow, two from Seth Fairholm, another from Brost, and then one more from Reid Schmidt, which put the home team up 9-4 going into the third.

There was even a point in the second where goalie Quincy Phelan commented he was worried about getting cold in the net because he hadn’t seen a shot in so long, said Dubrule, adding the Warriors outshot the Rush 25-8 in that period.

Redwater did come up with two more goals, but were matched with goals from Alexander Balderston and another from Snow to finish the game 11-6.

Dubrule said he expects the final against the CR Knights to be pretty evenly matched. Westlock has home ice advantage but will start the series March 13 at Rivière Qui Barre. Game 2 is scheduled for the Rotary Spirit Centre at 6:30 p.m. Saturday. If necessary, the two teams will fight it out in Westlock March 15 to decide who gets the gold medal and the ticket to provincials later this month.

“We beat them in our first meeting and tied in our second meeting,” said Dubrule. “We’re competitive, we should be fine, but each team gets better and better as the playoffs go on. They’ve made it there because they’re good too.”