Two 34-year-old Athabascans put up their dukes for their very first boxing matches in Taber on July 15. The two newbies, Geoff Loken and Kolt Nahirney, both lost their matches.
Aug 4, 2017 12:00 AM By: Town And Country Today Staff 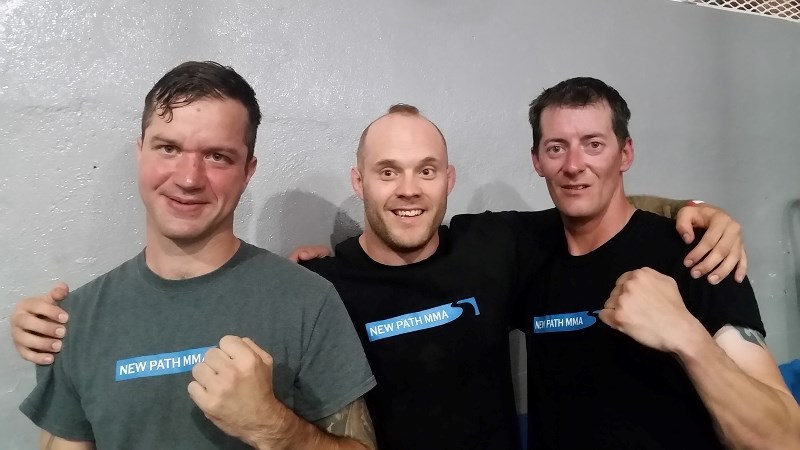 Two 34-year-old Athabascans put up their dukes for their very first boxing matches in Taber on July 15.

The two newbies, Geoff Loken and Kolt Nahirney, both lost their matches. Josh Kitchen – New Path MMA owner, operator and fighter who trained Loken and Nahirney – said he was very impressed with the skills they showed.

“We didn’t get the wins, but the boys did very well,” he said. “Just because they didn’t win, doesn’t mean they didn’t do well.”

Loken said he lost the match, which was put on by Teofista Boxing, after a KO in the first round.

“It’s great. It’s a huge experience and not something I would have thought I was going to do,” he said. “It was really good to say I’ve did it and I’ve gone out there and tried.”

The Athabascan said he started boxing last year when the New Path MMA opened in town, adding that in the past he has trained in karate.

Local also said going to the tournament was an important leap from his training.

“I think the biggest thing was dealing with the whole experience of the actual fight, taking it outside of the gym and outside of sparring into an actual competitive environment,” he said.

“It’s a lot more intense,” he added. “No matter how hard you spar in the gym you’re still sparring with friends for improvement, but there you’re actually competing provincially with someone who wants to win as badly as you do. So it really raises the stakes of the whole thing.”

He said he would continue to train in boxing and MMA, and hopes to compete in MMA fights in the future.

Kitchen pointed out that after their fights, both Loken and Nahirney said they would have been willing to get back in the ring right away.

He said the two would likely see their next fights in October, and he would be fighting as well.

“We’ll go back and keep working on our skills and go there, and test them again,” he said. “That’s what this is all about. Like any other sport, you practice, you build your skillset, and then you go to competition to test that skillset. You come back, you build on what didn’t work so well and you take away what did work really well.”

Kitchen said New Path MMA currently trains about 60 women and men aged 14 to 62 in boxing, kickboxing, Brazilian jiu jitsu and wrestling. He said about three quarters of the people training are women, many over 40. He added about 90 per cent of members also partake in sparring.

He said the best way to learn about the classes is to attend one. Drop-in sessions, located at the old Sears building in Athabasca, are $20 each.