Pirates in tough versus Slave Lake

Although the Barr-West Pirates dropped last Monday’s game 8-2 to the Slave Lake Thunder, coach Perry Kulmatyski said he was proud of how his team played against some pretty stiff competition.
Dec 29, 2010 12:00 AM By: Town And Country Today Staff 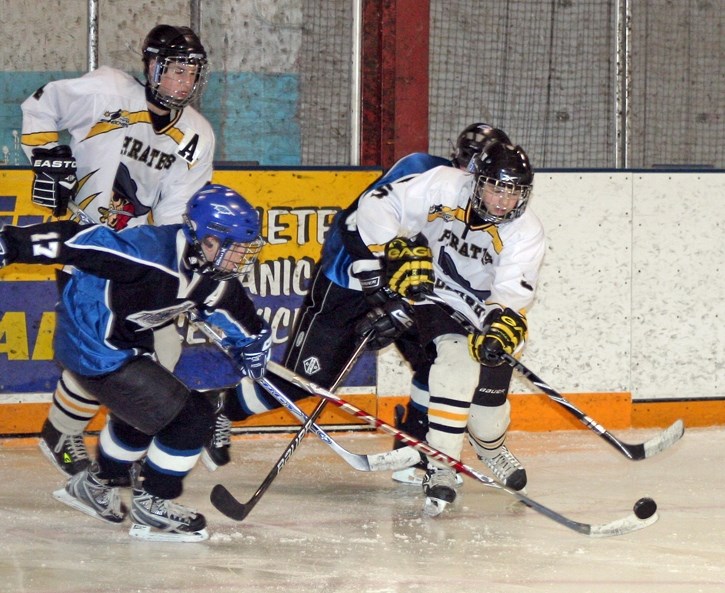 The Barr-West Pirates&#8217; Cole Walker (left) and Tyson Chizma scramble for the puck during last Monday&#8217;s matchup against the Slave Lake Thunder. Although the Pirates lost the match 8-2, a strong showing in the first and second periods was cause for celebration.

Although the Barr-West Pirates dropped last Monday’s game 8-2 to the Slave Lake Thunder, coach Perry Kulmatyski said he was proud of how his team played against some pretty stiff competition.

The bantam ‘AA’ team, which includes players from both Barrhead and Westlock, played a good game last Monday night at the Jubilee Arena in Westlock.

“We played two good periods of good, intense hockey. I think in the third we took a few penalties and then we lost the wind in our sails,” Kulmatyski said.

The Thunder took an early lead over the Pirates, scoring three goals in the first 15 minutes. The Pirates then got their booty in gear, and Tyson Chizma scored their first goal, leaving them down 3-1 after the first.

Both teams went into the second looking for an advantage, but the Pirates easily outplayed their opponents and Cole Walker was able to sneak one past the Thunder goalie. The score was 3-2 at the end of the second, and unfortunately that’s as close as the Pirates would get to tying up the game.

The home team was able to hold off their opponents for the first few minutes of the third, but the Thunder scored early and often, and were able to ride that momentum to an 8-2 victory.

Kulmatyski said this is the first year the team is playing in this league, the Edmonton Rural Bantam Hockey League. They’re up against some pretty tough competition from all over the province, including teams from much larger communities.

“They’re playing against towns that are drawing hundreds of players, so it’s pretty tough,” he said.

Only 27 players tried out for the Barr-West team, so most of their opponents have a deeper talent pool to draw from.

He’s not too worried that the team has not won a game yet this season, as the goal for this team is simply to improve and get used to a faster style of hockey. Barrhead and Westlock have a combined midget-level team, as well, and the bantams are meant to be somewhat of a feeder program for that team.

“It’s a good challenge for them. It’s a good league and it’s good hockey. We’re taking a pretty good jump up and anytime you do that, it’s a challenge,” Kulmatyski said.

“As long as we stay positive and keep working hard, we’ll improve.”