Proving to be number one

After standing in the shadows for two years, Edwin Parr Composite (EPC) graduate Allister Rubik is making the most of an opportunity presented to him at the beginning of the Grande Prairie Regional College (GPRC) Wolves’ soccer season.
Oct 5, 2010 12:00 AM By: Athabasca Advocate Staff 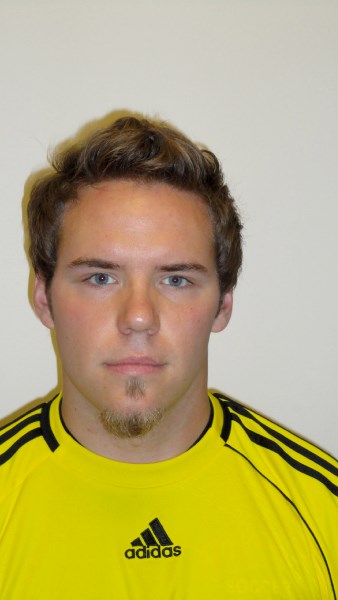 After standing in the shadows for two years, Edwin Parr Composite (EPC) graduate Allister Rubik is making the most of an opportunity presented to him at the beginning of the Grande Prairie Regional College (GPRC) Wolves’ soccer season.

The Wolves, who play in the Alberta College Athletics Conference (ACAC) mens soccer league, were planning to use Adam Giebelhaus, their starting goaltender from last year. But after he left to play for Concordia for the 2010 season, Rubik suddenly became the Wolves’ only option.

“When I found out that Adam wasn’t going to play, I brought Allister into my office and told him the situation. I showed him Adam’s jersey and told him if he can get into better shape and fit into the jersey, the job is his,” explained Chris Spaidal, head coach of the Wolves.

Viewed as an afterthought in the goaltending situation for the Wolves in his first two years with the team, Rubik has shown that he indeed deserves to be the starter.

In three games with the Wolves thus far this season, the Athabasca native has posted an impressive 3-0-1 record with a rock-solid 0.25 goals against average (GAA).

Dedication, hard work and a chip-on-the-shoulder attitude have propelled Rubik into not only a starting role, but that of a team leader.

“It’s been a lot of hard work to get where I am today,” asserted Rubik.

Going from a player who the Wolves were scared to put on the field in his first year, to one of the leaders on this year’s team, it has been a long journey for Rubik.

“They never really gave me a chance to showcase myself. Slowly they’ve seen that I’ve become a pretty decent goaltender, and now I’ve got the role as a starter,” stated Rubik.

Although it’s not yet fully clear how much of an impact Rubik has had on this year’s Wolves, in the two games he missed this year due to injury, the Wolves were outscored 7-0 and posted a 0-2 record.

In the four games Rubik started, the Wolves are 3-0-1 with three shutouts.

Spaidal admitted that he didn’t see Rubik starting in his third year with the Wolves, never mind experiencing the success that has come along, but is proud to have him on the team.

“It’s basically been a steady growth since I saw him three years ago. When I first saw him I was thinking, ‘Oh boy,’ because we had him come into camp as a walk-in and we didn’t see him starting at this time.”

It’s amazing how much of a difference two years can make.

“It’s his dedication. He’s one of the hardest working players I’ve ever coached, and he’s set goals and he’s out to achieve them,” added Spaidal.

After watching the pressure Giebelhaus faced as a starting goaltender for the past two years, Rubik was a little worried about the possibility of taking over that role.

“At first I thought it was going to be really hard going in, because I never played too much, but it turned out it’s not too hard. As long as I’ve got my head in it, I’ll play fine,” said Rubik.

According to Spaidal, the biggest differences he has seen in Rubik has been his increase in confidence on and off the field, and the amount of time he has spent improving the technical parts of his game.

“We’re very proud to have him in this program. His confidence has steadily grown over the past couple of years, which has also improved the technical part of his game on the field.”

After sitting on the bench for the past two games with an injury, Rubik is eager to get back in net.

“He told me he couldn’t stand sitting on the bench any long. That’s the type of attitude I want my players to have,” said Spaidal.

As for Rubik, he wants to continue his stellar start to the season.

“For the rest of the season, I’m hoping to keep our winning streak going with me in net and try to allow the least amount of goals.”

Rubik returned to action Oct. 3-4 against Keyano College, but results weren’t available at the time of press.