Red Lions in do-or-die to play for NCABL title 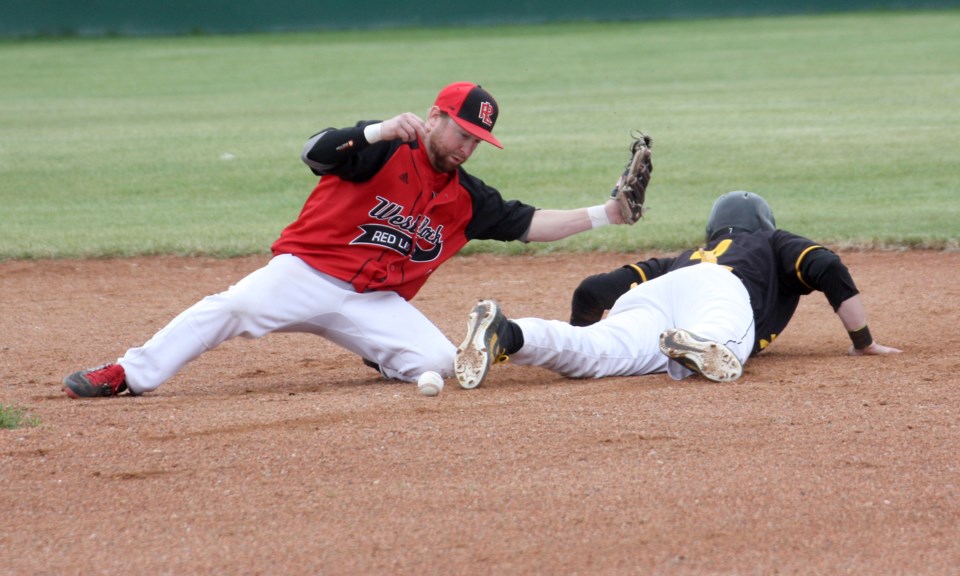 Red Lions shortstop Jordan Brand couldn’t squeeze the ball during this play at second base in Game 1 of their NCABL semifinal series versus the Edmonton Primeaus played Sept. 12 at Keller Field in Westlock. The Red Lions won the first game 3-1, then dropped Game 2 by a 3-2 score forcing a third-and-deciding Game 3 that was scheduled to be played Sept. 14 at Wally Footz Field in Edmonton. George Blais/WN

WESTLOCK - The Red Lions’ backs are against the wall in their quest to play for a North Central Alberta League crown.

On a cold and dreary Saturday at Keller Field in Westlock, the club split games 1 and 2 of the NCABL semifinal series versus the Edmonton Primeaus — the deciding Game 3 is scheduled for tonight, Sept. 14, at Wally Footz Field in Edmonton.

“We’re looking forward to it,” said player/manager Chris Brand. “Our team is ready to go and we’re hoping to win one on the road to bring the finals back to Westlock for next weekend.”

The Red Lions took the semifinal series opener 3-1 by breaking the game open with three runs in the bottom of the third — the Primeaus responded in the top of the fourth with a single run.

In Game 2, the Primeaus flipped the script, getting out to a 3-0 lead before the Red Lions were able to chip away with runs in the fifth and sixth.

“The pitchers on both sides settled down whenever they got into trouble and worked through whatever jams they had. It was a tough day to score runs in general,” said Brand. “Game 2 … they had a pitcher on the mound that really kept us off balance. We kind of got on him at the end of the game, but we just couldn’t come all the way back.

“We had runners on first and second with two outs … we had a shot of completing the comeback to tie it up, but we just came up a little short.”

If if the Red Lions are able to win tonight they’ll be hosting games 1 and 2 of the NCABL championship series Saturday, Sept. 19.