Red Lions one win away from the pennant 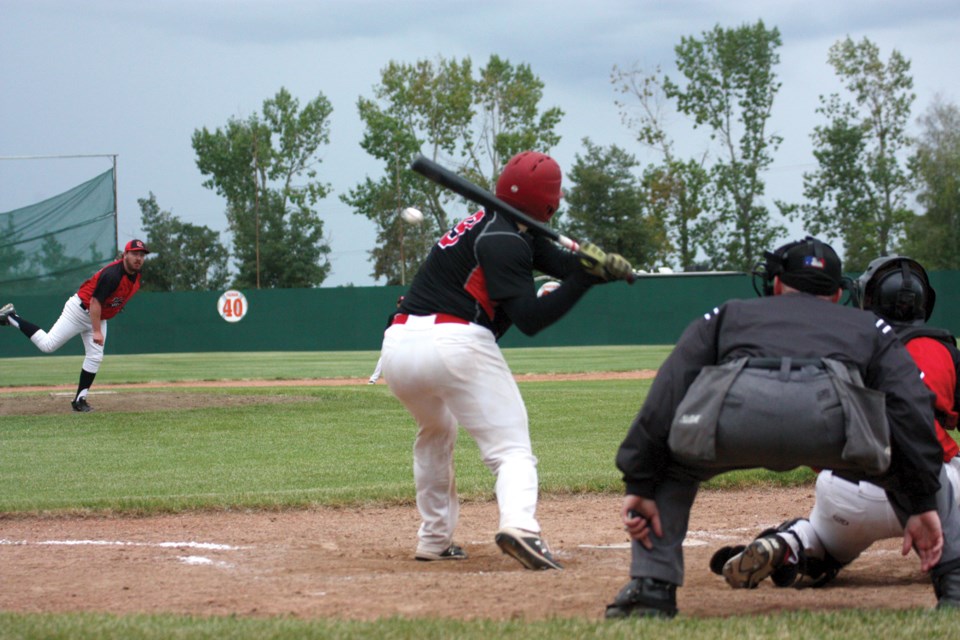 Red Lions’ pitcher Sean Beaudoin brought the heat during the club’s 7-4 Aug. 20 win over the Fort Saskatchewan Reds at Keller Field. The victory improved the club to 6-0 in the NCABL. George Blais/T&C

WESTLOCK - The Westlock Red Lions are a win away from claiming the North Central Alberta Baseball League pennant following a dominant 7-4 Aug. 20 home win over the Fort Saskatchewan Reds.

At Keller Field, the Red Lions stormed out to a commanding 6-0 lead through the opening two frames before the winless Reds were able to rally.

“We jumped on their pitcher pretty early in the first inning with four runs and then scored another two in the second. Our bats came alive nice and early and gave us a good cushion,” said player/manager Chris Brand.

The Reds did mount a bit of a comeback, scoring three in the top of the fourth before a double play ended their run.

The clubs traded runs for the remainder of the tilt, which was called in the fifth inning due to darkness.

“They had us in a bit of trouble that we were able to get out of in the fourth,” said Brand.

Heading into the final week of regular-season play the Red Lions are assured a playoff spot — the only question left to answer is whether they’ll win the pennant and finish first in Pool ‘A’. The Lions are 6-0 in Pool ‘A’, while the Parkland Twins are 7-2 and the Reds stand at 0-8.

The Red Lions hit the road to face the Twins Aug. 24, before playing host to them at Keller Field Aug. 26 at 7 p.m.

“We have some tougher games ahead versus Parkland, but if we win one more game we basically clinch our division and win the NCABL regular-season championship (pennant),” said Brand. “They have a decent, veteran club that can put up runs. But if we play the defence we’ve been playing all year and continue getting good pitching we’ll be fine.”

The top two teams in each pool qualify for the best-of-three league championship semifinals Sept. 12-13 (third games, if needed, will be played Sept. 14-15).

The format is a crossover that sees the top finisher in Pool ‘A’ play the second place team in Pool ‘B’ and vice versa.

The league championship series, which will be hosted by the highest-ranking club remaining in the playoffs, goes Sept. 19-20.