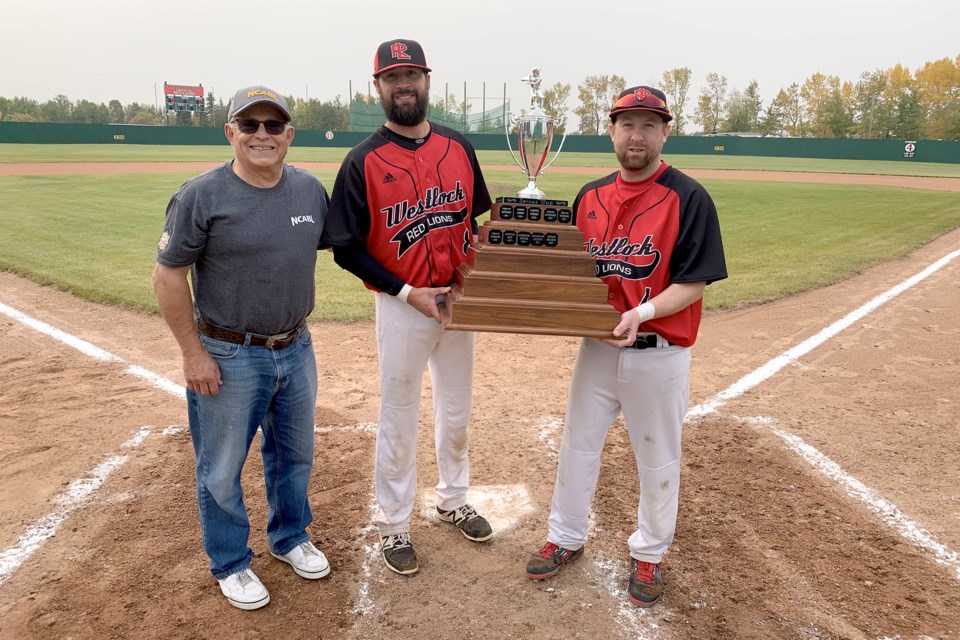 NCABL commissioner Paul Riopel (left) presented the pennant trophy to the Red Lions in advance of Game 1 of the league championship series played in Westlock Sept. 19. Accepting the trophy on the behalf of the club are player/co-manager Chris Brand (beside Riopel) and player/co-manager Jordan Brand. George Blais/WN

At Keller Field in Westlock, the Red Lions ran into a determined A’s team bent on claiming their first NCABL title — the Red Lions dropped the opening game 4-1, then fell 2-1 in the late-afternoon tilt.

Red Lions player/manager Chris Brand said they had their chances in both, but just couldn’t get that one timely hit.

The A’s, who finished second overall in the NCABL with a 6-2 mark, made it to the finals with a 2-1 semifinal series win over the Parkland Twins, while the Red Lions advanced to the championship with a 2-1 series victory over the scrappy Edmonton Primeaus.

“It was a tough end to the year for sure, those were two tight games. We were hitting the ball, we just couldn’t hit any gaps, or get any seeing-eye singles,” said Brand the day after the losses. “We just couldn’t get any momentum.”

In Game 1 the Red Lions took an early 1-0 lead before the A’s struck for two in the third and then two more in the fourth. In the bottom of the sixth the Red Lions had a chance to cut into the lead as they loaded the bases with nobody out. But back-to-back strikeouts, followed by a pop out, ended the late-inning rally.

“Their closer that they brought in threw really, really well,” said Brand.

Game 2 started with a first-inning two-run homer by the A’s — the Red Lions were able to cut the lead in half by scratching out a bases-loaded single in the third.

“We just weren’t able to cash in two — we actually had a guy thrown out at the plate on the same play,” said Brand.

Despite the tough finish, Brand said they’re proud of their season, which almost didn’t happen due to the COVID-19 pandemic. Of note, the Red Lions accepted the NCABL pennant trophy before Game 1, a title they earned with a perfect 7-0-1 regular-season record.

“Obviously losing is a disappointment, but I’m proud of the boys, they played well all year,” said Brand, noting that the majority of the club will be returning in 2021.

“From the get go our biggest thing was being able to get together as a team … being with people you enjoy spending time with, which was basically our biggest focus. Winning was, in some ways, kind of secondary.

“I want to thanks all the fans that came out and watched. It’s nice seeing people support the Town of Westlock, as well our Red Lions baseball team.”