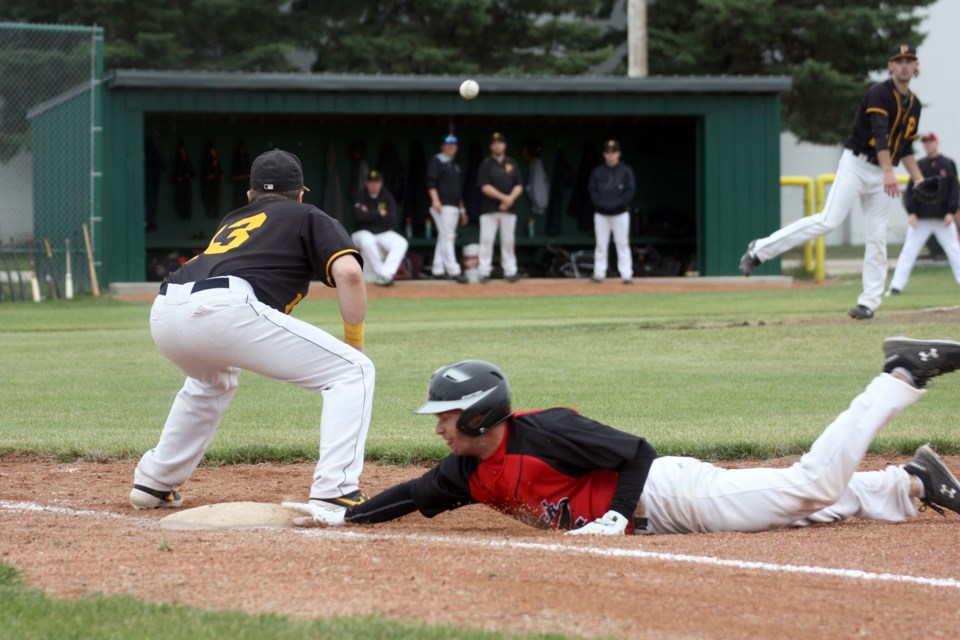 Held at Wally Footz Field in Edmonton Sept. 14, the Red Lions rolled to a 7-3 win in the winner-take-all Game 3 — the clubs had split games 1 and 2 in Westlock Sept. 12. The Red Lions claimed the NCABL pennant in August after posting a perfect 7-0-1 regular season mark.

“Our boys went to plate with decent approaches and were able to hit two or three doubles in the middle innings that broke it open,” said player/manager Chris Brand.

Both clubs had their chances early in the deciding game as the Red Lions had two runners in scoring position in the top of the first, but just couldn’t cash them in.

“They got us in trouble in the first as well, but they couldn’t score either,” he added.

The flood gates opened in the third as the Red Lions were able to bat around the order to score five runs and then added two more in the fourth to seal the deal.

In the best-of-three championship series, which kicks off at 1 p.m. Saturday, Sept. 19 at Keller Field, the Red Lions will face either the Parkland Twins or Sherwood Park Athletics — that semifinal series is tied at a game apiece as the As took the first game 10-2, while the Twins rebounded in Game 2 with a 2-0 victory. Game 3 is slated to be played tonight, Sept. 15, in Sherwood Park.

Meanwhile, Game 2 of the championship final goes at 4 p.m. Sept. 19 in Westlock, while Game 3, if needed, will be held in Westlock the following day at 2 p.m.

There’ll be a small gate fee in place for the championship series of $5 for anyone 13 years of age or older, while kids 12 and under get in for free.

“We’re definitely looking forward to it. Our team is running on a bit of a high so hopefully that will continue this coming weekend,” Brand concluded.