R.F. Staples curlers off to provincials 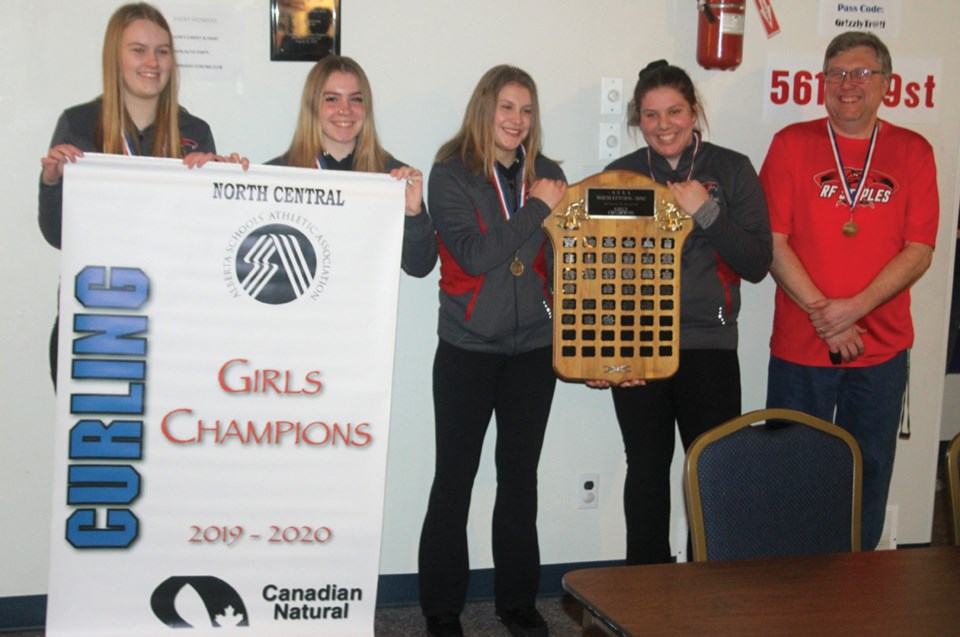 R.F. Staples School’s senior girls curling team, consisting of skip Signy Montgomery, third Mackenzie Shank, second Payton Shank and lead Lexus Brietzke are off to provincials in Lethbridge March 5-7 after defeating all competitors and striking for gold at the ASAA North Central Zone Championships Feb. 21-22 in Barrhead. The team is pictured after the final with their championship banner, plaque and coach Jason Wiks. Kevin Berger/WN

WESTLOCK - The province’s biggest event in high school curling will take place this weekend and Westlock and the north central zone will be well-represented.

The rink won all three of their pool-play games, which put them straight into the final against the rink from Living Waters Christian Academy from Spruce Grove.

“The team that they played in the final was also undefeated, they went three for three as well. The last game was a really good game, it was really close right to the end of the game. It went down to the skip stones in the eighth end,” said Wiks.

“It was a really exciting tournament.”

It’s often a game of inches and sometimes lick, but the girls’ experience and drive on the pebbled ice, coupled with their effort and skill level make them a tough competitor.

“They’ve been curling for a couple of years and they’re quite competitive, so they had a pretty good chance” said Wiks.

They’ve got a pretty good chance to do well at provincials as well, he said.

The provincial championship will welcome Alberta’s best high school girls, boys and mixed curling teams in one large bonspiel to decide this year’s best in the province.

“I think we’re going to be competitive. They’ve worked really hard all year and I think we’ll go to compete and we’ll see how we do. It all kind of depends on who shows up and how it works out,” said Wiks.