The Edwin Parr senior girls basketball team isn’t too shabby. The EPC Angels won the bronze medal over the Fort McMurray Trappers with a 55-48 win in their home tournament this past weekend.
Dec 14, 2010 12:00 AM By: Town And Country Today Staff 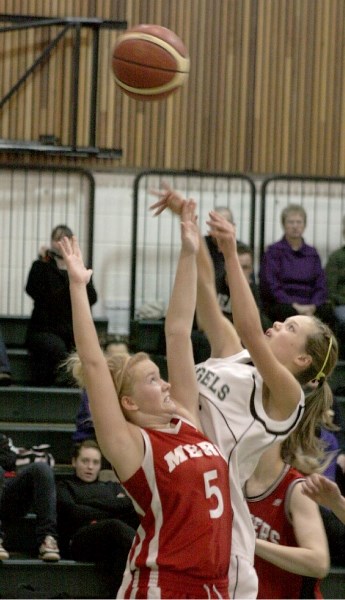 EPC Senior Angel Jackie Elgert takes a shot over a Fort McMurray Trapper during the fourth quarter of the bronze medal match in a tournament hosted by Athabasca. The Angels ended up defeating Fort McMurray 55-48 Saturday afternoon in the EPC gym to take the bronze. It was the second medal in as many weekends for the senior Angels to kick off their 2010-2011 basketball season.

The EPC Angels won the bronze medal over the Fort McMurray Trappers with a 55-48 win in their home tournament this past weekend.

Hosting a nine-team tournament that tipped off this past Friday, the Angel’s first game was held Friday afternoon. Despite losing Amy Kobzey, a key member of the Angels’ starting lineup, in the first two minutes of the game with a sprained finger, the Angels easily got through to the next round with a victory over Hilltop, a team from Whitecourt, 68-30.

On Saturday afternoon, the Angels were defeated by Westwood, forcing them to the bronze medal game.

The Angel’s also finished second at the Fort Saskatchewan Basketball Tournament Dec. 3-5, bringing home the silver medal for their efforts..

A one-point loss in the championship game was all that stood in the way of the girls capturing the tournament gold.

“We have to learn to get a team down and keep them down,” contends Wade Hicks, who is currently in his ninth year coaching the team.

With previous dominating performances, like a 78-27 victory over Redwater in the semi-finals, aspirations were high entering the championship game against the Ardrossan Lady Bisons.

Trailing for the first three quarters of the game, the Angels finally managed to seize the lead at the midway point of the fourth quarter; a scenario they had not yet faced during the course of the tournament.

This is when Hicks noticed his team start to lay back. “We just stopped playing.”

The Lady Bisons regained the lead, and with three shots on the rim during the final seconds that would not drop, the Angels fell painfully short of pulling out the comeback and walking away with a first-place finish.

Hicks describes his squad as ‘big and athletic;’ a defensive-minded team that plays strong and aggressive man-to-man. “We have no weaknesses at any position. We play two (strings) deep.”

Considering that along with Edson, the EPC senior girls are one of the favourites to reach the finals, it’s not a stretch that Hicks’ goal is to have his team in Chestermere this year at the provincials.