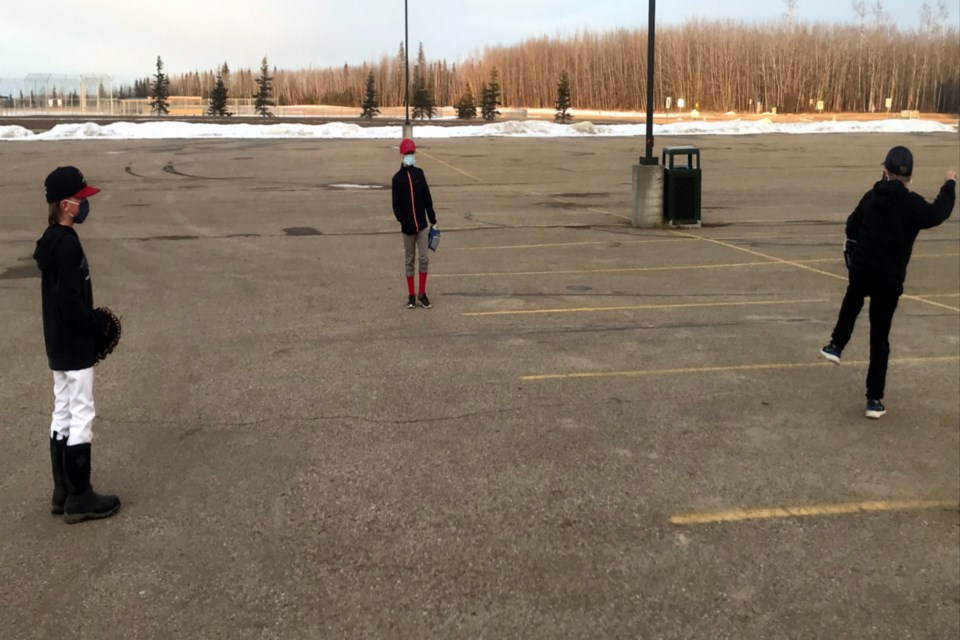 Athabasca Trappers players Ty Bowzaylo, Sam Robinson and Kesler Cummings kept the practice going outside the Athabasca Regional Multiplex March 25, as they look forward to a new season on the diamonds. The Athabasca Minor Ball Association is currently accepting registrations with a 50 per cent discount, and are also seeking coaches and umpires.Submitted/Sam Bowzaylo

ATHABASCA — Registrations for the Athabasca Minor Ball Association (AMBA) are still open and spring training was officially underway with practices, following all provincial COVID-19 and Baseball Alberta guidelines, at the Athabasca Multiplex, but those practices were cancelled March 27 due to increased COVID cases in the area.

There are currently enough players signed up to form a U11 team and a U15 team, but youth as young as four can join, said AMBA vice president Sam Bowzaylo. As long as there are nine members, a team can be formed.

“(Following) all Alberta and AHS (Alberta Health Services) guidelines we’re allowed to run practices that are modified,” said Bowzaylo. “We always have to maintain social distance and that kind of stuff. It changes a little bit of the practices for the kids, but I’m sure it’s the same in any other activity in school.”

As of March 27 however, practices are suspended due to identified cases of COVID-19 at Edwin Parr Composite (EPC) in Athabasca.

"We don't have any cases in minor ball," he said. "We just wanted to be proactive and eliminate the chance of any spread due to minor ball activities. We plan to resume after two weeks if everything is good."

When they resume under current Alberta Health Services (AHS) guidelines, which they have been following to this point — no spectators are allowed, coaches wear masks at all times, and if the players are doing strenuous exercises like running laps, they are allowed to take their masks off.

“We (were) actually holding practices indoors at the arena at the Multiplex,” said Bowzaylo. “All the kids get dropped off at the front door and coaches take them in to our practice and then back out they go.”

So far, the only team to practice is the U15 AA team and sessions are kept to about an hour, but when the weather warms up AMBA is hoping practices can move outside as more youth sign up, meaning the association is also seeking more coaches.

“We opened registration really early this year just due to the fact that hockey had been cancelled and soccer was up in the air,” he said.  "We were hoping to give the kids something to do. If we can get these kids onto a team and get them going, we can start at least practicing this year.”

The Rally Cap level is for youth up to seven years old; Rookie is for eight- and nine-year old's, U11 covers 10- to 11-year-olds, and so on up to Twilight for players 35 and older.

Registration forms can be found at athabascaminorball.com and registration fees are 50 per cent off from 2020 rates.