R.F. Staples School’s Dylan Macintyre sets up Mackenzie Hay for a spike during their game against Parkland Composite Nov. 16 during the North Central Zone 3A Boys Volleyball Tournament hosted at the school. Both R.F.
0
Nov 19, 2019 12:07 AM By: Chris Zwick 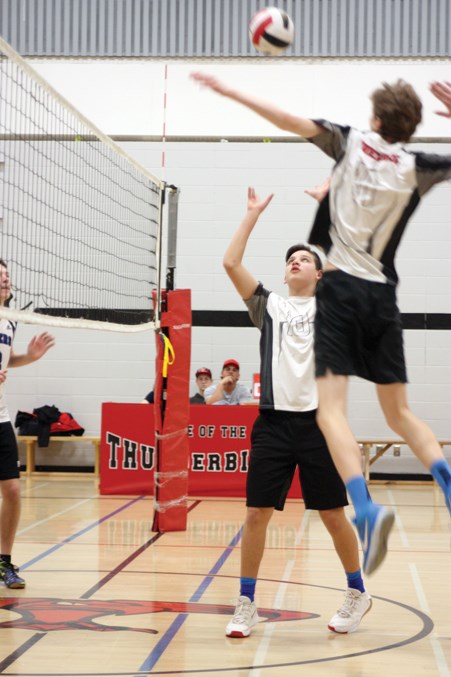 R.F. Staples School’s Dylan Macintyre sets up Mackenzie Hay for a spike during their game against Parkland Composite Nov. 16 during the North Central Zone 3A Boys Volleyball Tournament hosted at the school.

R.F. Staples School’s Dylan Macintyre sets up Mackenzie Hay for a spike during their game against Parkland Composite Nov. 16 during the North Central Zone 3A Boys Volleyball Tournament hosted at the school.

Both R.F. Staples senior volleyball teams were each in a position to move on to provincials later this month with a first or second place finish, but came up just short, picking up the bronze in each of their zone tournaments last weekend.

The boys hosted six other teams for the North Central Zone 3A Boys Volleyball Tournament at R.F. Staples Nov. 15-16, while the girls travelled to Whitecourt for their own zone tournament. Both teams finished with a bronze medal.

There was a log jam at the top of the boys tournament heading into the playoffs, where only four of the seven teams made the cut. This makes it ultra-competitive as the top teams vie for placement in  the playoffs during the round robin.

Boys coach Kyle Beattie noted the T-Birds, along with Morinville Composite and Barrhead Composite were tied for first at the end of the round robin portion.

That put the T-Birds into the semifinal against Morinville.

“We all knew the semifinals were going to be a dogfight,” said Beattie. “Morinville just has a way of finding holes in our blocks.”

That loss put the home team into the bronze medal match, where they handled Parkland Composite for the second time that day quite handily.

“I’m proud of those boys. They proved they could compete with the top teams in Alberta all year. We are maybe unfortunate in our zone that only two of us get to go on to contest for the provincial title, or fortunate that we have the chance to compete with the best all season,” said Beattie.

Likewise for the girls team, said coach Jessica Carlyon, who coached her team to a bronze medal of their own in Whitecourt.

“The three Grade 12s did very well leading the team. I’m proud of the girls and the growth in skills they have had in the season as well as confidence and maturity as athletes and young women,” said Carlyon, who also thanked the group of parents that helped out.

The T-Birds finished third after the round robin after defeating Edwin Parr and Morinville Composite. They also lost to Hilltop High and then beat Parkland Composite to finish their first day.

On Saturday morning, the girls won against Frank Maddock, but then lost to Barrhead Composite, before heading into the semifinals where a rematch with Hilltop was in the cards for the T-Birds.

“It was a close game and all the teams were pretty tired at this point. It was tough to lose, but we still managed to play well despite being so tired,” said Carlyon.

That placed the T-Birds into the bronze medal match against Morinville Composite, which they won in two straight sets, to claim their season-ending medal, which the team and coach are content with. “A bronze medal in the zone is a pretty good finish for our team’s season,” said Carlyon.