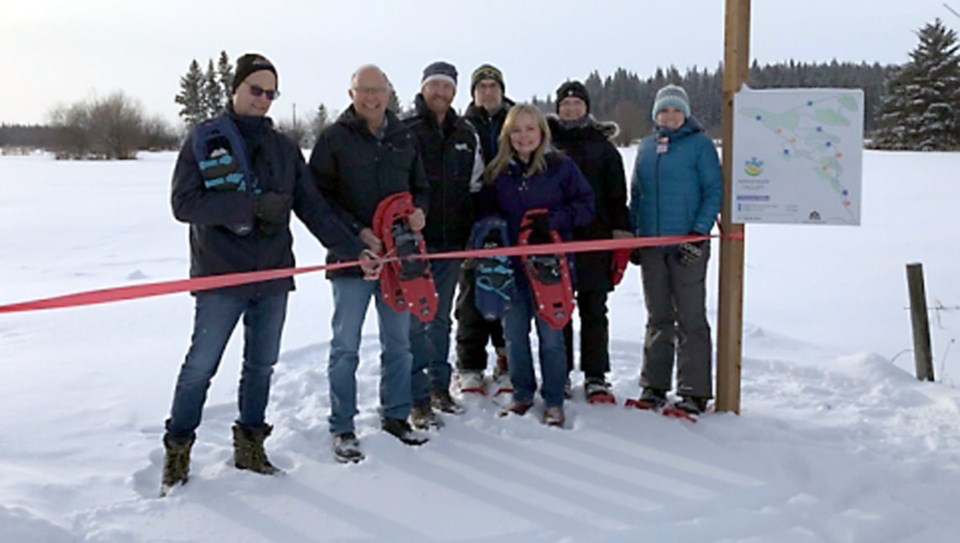 WESTLOCK - The Tawatinaw Valley Ski Hill is blazing new trails, adding yet another feature to its growing list of things to do in the winter, as board members, staff and a new sponsor christened in a new trail meant exclusively for snowshoeing.

Friday, Jan. 10, marked the official opening of the Pembina Path at the facility, named for sponsor Pembina Pipelines Corporation, which contributed $13,000 towards the project.

“We’re trying to provide some amenities that don’t cost a lot, for everyone to come and enjoy, right down to the cinnamon buns in the chalet,” said Batog.

“We’re having a good time down there trying to make a family atmosphere and community that everyone can enjoy and afford.”

Sutherland said the company was happy to contribute to such an important community venture in the region.

“The Westlock community is very lucky to have such a great facility managed by volunteers of the Tawatinaw Valley Ski Club ... community building is an important focus area of Pembina’s community investment program, so supporting the Trail Blazing project at Tawatinaw was a great fit. Building new trails and being able to increase families’ adventures on the hill will also help increase the number of visitors, which is an economic benefit to the area,” said Sutherland.

Snowshoe enthusiasts can now join their family and friends at the hill for any number of activities, including not only downhill skiing and snowboarding, but cross-country skiing as well, skating on the new rink, and of course tubing, which is free on Sundays and has been a huge draw across the region since the facility opened for the winter in December.

The Pembina Pipelines donation also went towards the purchase of actual snowshoes that can be rented from the ski shop for $10 a day for adults, or $5 for kids, making for an inexpensive day on the hill for the whole family.

There are now 50 sets of modern snowshoes one can rent and spend the entire day hiking through the great outdoors.

It couldn’t have come at a better time for snowshoeing enthusiast Lorna Punko, who coincidently enough has recently reached out to the community to start a snowshoeing group and more than 30 people have already expressed interest.

Punko took her 4-H Club snowshoeing a few weeks ago and thought it would be a great idea to start a club.

Now with a dedicated trail at Tawatinaw, it’s really just a matter of meeting up and taking in the fresh air together.

Punko and a friend of hers are also avid kayakers and can be found at Long Island Lake on many days throughout the summer. Her friend started a group called “Let’s go kayaking,” to draw people out and now Punko has applied the same strategy to snowshoeing with her group “Let’s go snowshoeing,” which can be found on Facebook.

With the popularity of the Facebook page with residents from all over the region, Punko plans on setting up a regular meeting time for the group at Tawatinaw.

“The whole idea is you want to go snowshoeing and sometimes you’re just looking for someone to go with,” said Punko.

With corporate and municipal support, the facility continues to draw in residents from around the region, which is exactly what it needs to stay afloat.

“Our numbers are booming outside of the county, and we’re drawing a lot from the north, so that’s awesome” said Batog.

She also noted the facility has started offering happy hour on Saturdays, extending its hours to 8 p.m.

“When the lift goes down, we turn the lights on at night for the two parks and the terrain park. We offer a family platter from the kitchen and if you buy that you get free tubing.”

“We’re looking forward to embracing some more weekends,” said Batog, including World Snow Day next Sunday, Jan. 19, which will include a number of activities for the whole family.

BP Cup a community affair
Feb 12, 2020 7:06 AM
Comments
We welcome your feedback and encourage you to share your thoughts on this story. We ask that you be respectful of others and their points of view, refrain from personal attacks and stay on topic. To learn about our commenting policies and how we moderate, please read our Community Guidelines.