The crack of the bat still may sound in Barrhead 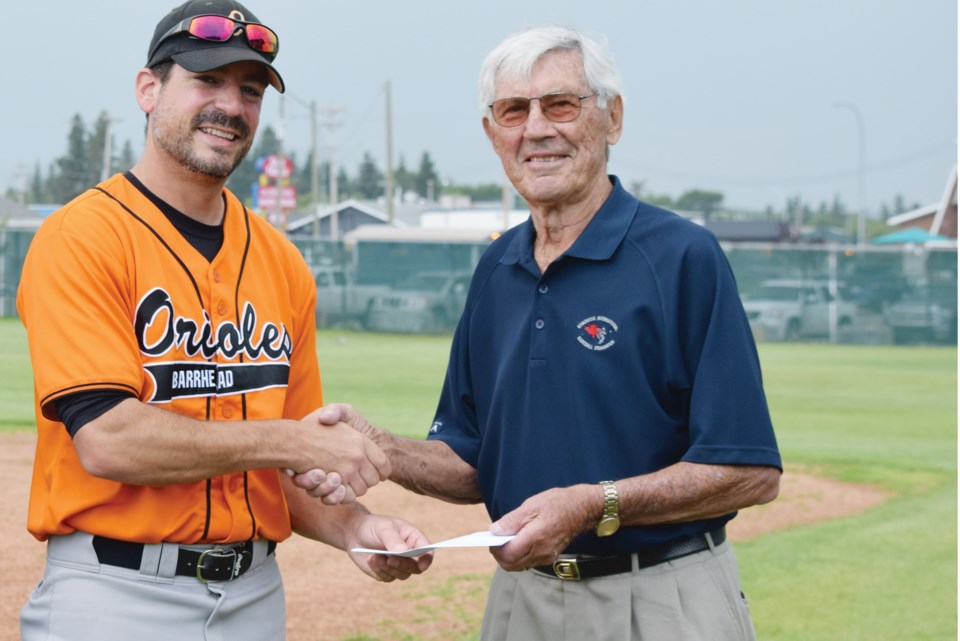 Mike Roszko, pictured here with Wally Footz of the Edmonton International Baseball Foundation, said the Barrhead Minor Baseball Association is hoping to go forward with a plan that would see organized youth softball return to the Barrhead Sportsgrounds this summer.

BARRHEAD-If baseball is going to be played, at least at the youth level, it will not be hardball but softball.

That is what Barrhead Minor Baseball Association (BMBA) president Mike Roszko told the Town and Country This Week.

We contacted the association after Baseball Alberta announced it's Return to Train Plan.

In March, baseball's governing body, at least for youth activities stated that it had suspended all on-field activities until September due to the coronavirus pandemic.

On June 5, it revised its previous decision in anticipation of the loosening of Alberta Health Services and public health restrictions as part of the province initiating Stage 2 of its economic COVID-19 relaunch plan. The province launched Stage 2 on June 12, a full week ahead of the expected date of June 19.

Under Stage 2, sports teams have the green light to begin working with up to 50 players at a time.

However, Roszko said via an e-mail, under Phase 1 of the "Return to Train Plan" is very restrictive.

"Teams can only hold restricted practices, and the types of activities allowed are quite limited," he said, adding the activities are geared towards skill development. "For example, solo hitting drills off a tee, solo throwing against a fence or backstop, other activities where participants stay socially distanced and have no interaction or contact with each other."

Games are allowed under the plan in Phase 2 and 3, which dates haven't been announced.

Roszko added there are significant costs (both monetary and labour) involved that the association is not sure they are willing to pay for such limited payoff for players in either its house league or 'AA' programs. Associated costs include signage, sanitation, pre-screening and contact tracing requirements.

"Without an opportunity to play baseball games, it is difficult to justify the risk and expense of this plan," he said.

In Barrhead the majority of its players, 73 per cent, play in its house league and only 27 per cent play competitive 'AA' baseball. BMBA does not offer the top 'AAA' or performance-based program.

"What this means is that nearly three quarters of our kids are not signing up to practice and perform drills to refine their skills," Roszko said. "They want to play ball games and have fun."

He added it would also be difficult to field teams in the competitve program. The 43 registered players in the competive program are spread out among four age groups if the eventual goal is to play games. In Phase 2, for inter-squad or local cohort games are allowed.

"If we as a minor sports association are going to implement a return to activity and sanction events that might pose a health risk to our members, then we would prefer that those events actually meet the needs of the majority of those members and not just be a huge disappointment," Roszko said.

However, he said the guidelines released by Softball Alberta are less stringent, allowing for the possibility of games. In Barrhead organized youth softball is also coordinated by the BMBA.

In preperation, last week they sent out survey to softball registrants to gauge interest and potential numbers under Phase 1 of the "Return to Play" softball guidelines which include controlled practices, inter-squad scrimmages as well as camps and clinics.

Phase 2 will incorporate games or training within designated sport cohorts (max 50 participants). Phase 3 may allow for inter-club competitions such as tournaments.

In the end, it will depend on the survey responses whether the BMBA proceeds any further, even then it isn't a given.

"Right now as I look at all the travel restrictions and limited options available. We may have to get creative to make something work," Roszko said.

One of the ideas he has is a "2020 Barrhead Summer League" where the association takes all of our interested players and pool them together to form teams that can play each other in a series of small tournaments that each fit within the cohort rules, intramural style.

"We don't know yet what it's going to look like. It may come down to that, or we may just have to wait until 2021 and hope things return to normal," he said.

The deadline for the surveys was June 17, but Roszko said it could take up to two weeks for the association to come up with plan of attack.

Neerlandia native set to go to her second Paralympic Games
May 4, 2020 3:30 PM
Comments
We welcome your feedback and encourage you to share your thoughts. We ask that you be respectful of others and their points of view, refrain from personal attacks and stay on topic. To learn about our commenting policies and how we moderate, please read our Community Guidelines.