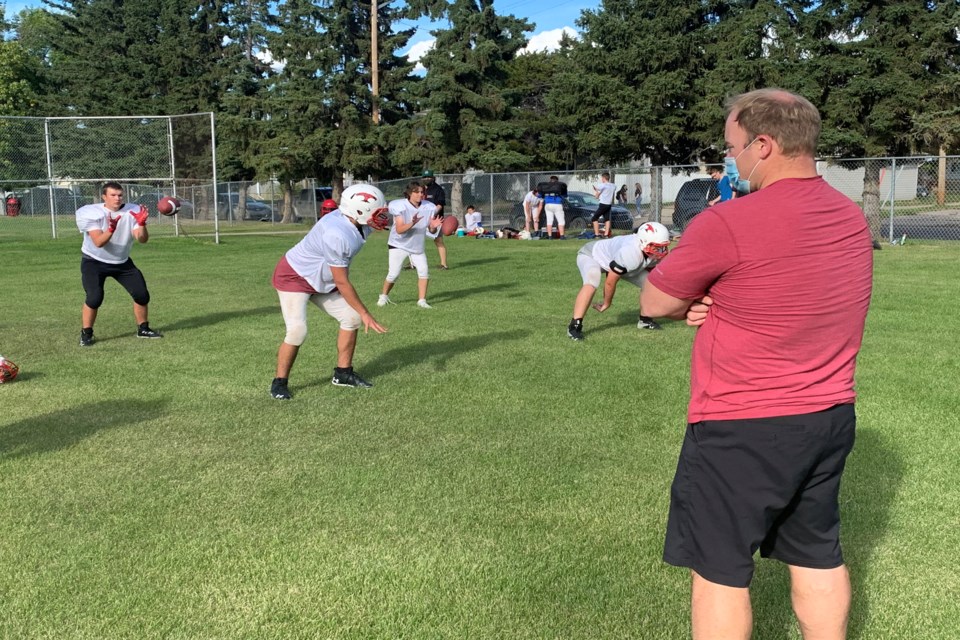 WESTLOCK - The Westlock Thunderbirds are back for a season that will be unlike any other in the club’s 14 years of existence.

Due to COVID-19 and the return-to-play guidelines set out by Football Alberta, which include a 50-person limit on gatherings, the club won’t be playing any regular season games this fall — in fact the team had planned to withdraw from the Wheatland Football League in 2020 due to its short bench and the lack of a bantam/pee wee program and instead play nine-aside football.

While on the field during Day 2 of fall training camp at R.F. Staples School Sept. 9, 32 players (eight at the bantam age and the rest at high school level) were in their pads and helmets, but coaches were wearing masks and maintaining physical distancing.

Despite all the changes and added safety precautions, head coach Jon Kramer remains as upbeat and positive as ever as they’re holding nine practices over the month to get vets back into shape and introduce new players to the game.

“Life hasn’t stopped with COVID. We’re trying to find a way forward so we’re looking at what opportunities we do have, how can we make the most of them and most importantly, how can we make it fun for the students,” said Kramer.

“I’m proud of how the executive and coaches have been adaptable to finding the best ways to move forward. We’re happy with the two months we’ve got planned.”

Two jamborees are slated for Sept. 24 and Oct. 1 at the field across the street from St. Mary School which borders the continuing care centre. There the club will be split in half and the players will get a chance to show what they’ve learned.

“It’ll almost be like overtime in CFL where we’ll put the ball at the 40 and then one team gets a few cracks to put the ball into the end zone. Coaches will be in the huddle and we’re hoping, as long as the weather is good, to invite those (continuing care) residents to be able to watch from a distance. It should be a good set up,” Kramer explained.

Following that, they’ll formalize the split squads and play a game at the Westlock Elementary School field Oct. 8, then hold a few intra-squad games in the lead up to Friday Night Lights Oct. 30.

“We’ll see if the teams are fair and if they need adjusting. For the following three weeks after Oct. 8 we’ll have them in set teams and split up our coaches as well so they can do some game planning and throw in new plays … just to amp up the competition,” said Kramer.