Too much size in Lions for Pacers to handle

By the end of Friday night’s 69-20 loss against the St. Paul Lions, the Edwin Parr Composite Pacers weren’t just hurting on the scoreboard.
Sep 21, 2010 12:00 AM By: Athabasca Advocate Staff 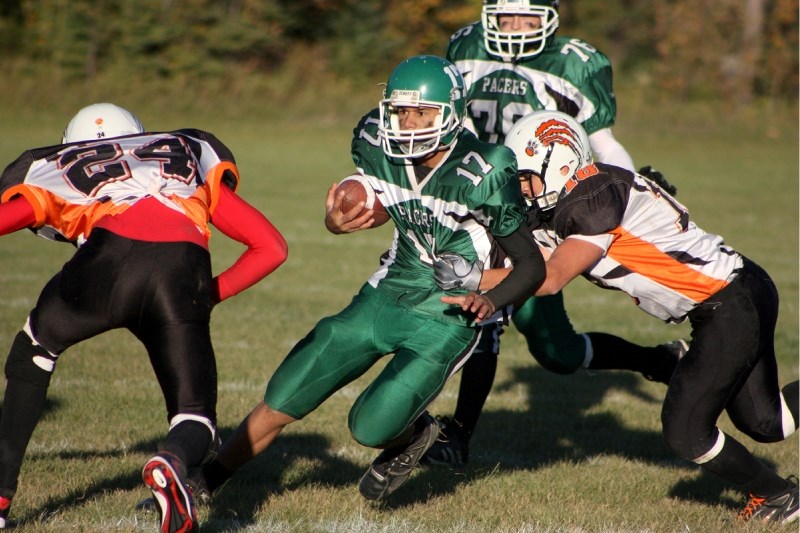 EPC Pacer quarterback Gaetano Minto (m) is mauled by several St. Paul Lions during the second quarter of action in Friday night’s match-up at Edwin Parr Composite School. The Lions ended up winning 69-20 to put the Pacers in an 0-2 hole to start the season.

By the end of Friday night’s 69-20 loss against the St. Paul Lions, the Edwin Parr Composite Pacers weren’t just hurting on the scoreboard.

Two of the Pacers offensive weapons were seen sharing one crutch each on the sideline for most of the second half.

The two Snows, Jessie and Mitchell, were both hurt in a tough loss to a very strong Lions team.

According to head coach Pete Burden, both of the Snows should be fine by the end of this week.

“Mitchell suffered more of a bruise on his knee, so he should be OK, and with Jessie’s knee injury, it’s been an ongoing thing for him. Whenever he takes a good hit it acts up, but he should be good, too.”

Jessie looked to be the worse of the two, as he was carried off with the help of two of his teammates. He suffered an apparent knee injury early in the second half after several Lion players tackled the running back after a good run.

The game started off well for the Pacers, as they were able to score touchdowns in their first two offensive possessions.

“St. Paul was talking before the game that their goal was to not allow us any points, but we surprised them with back-to-back early scores,” said Burden.

Unfortunately, so did the Lions.

“We knew we weren’t going to be able to stop them defensively, because we’re too small compared to them,” said Burden.

What looked to be an old fashioned shootout turned into a blowout by the middle of the second quarter.

The Lions headed into the second quarter up only 24-17, but that changed drastically minutes into the quarter.

The Lions struck for a quick 15-yard running touchdown as the quarter began to put the score at 28-14.

After the Pacers’ offense stalled in an attempt to get back into the game, a botched punt was returned for yet another quick touchdown to make the score 35-14 in favour of the Lions.

The size difference between the two teams was heavily in favour of the Lions, which played a big factor in how the game ended up going.

“They were a lot bigger than we thought. They took away our run game and forced us to pass, which we don’t have much experience in,” explained Burden.

The next Pacers’ offensive possession wasn’t any better.

The Lions picked off one of the three Pacer quarterbacks, Gaetano Minto, deep in Pacer territory for yet another quick score.

Unlike the first quarter, the Pacers had trouble moving the ball once again on their next offensive possession.

After giving up the ball on downs, the Lions’ lightning-fast offense struck for a one-play passing touchdown to put the game out of reach before halftime.

The Pacers entered halftime down 49-14.

The second half was better on the scoreboard, but not in the infirmary.

After both Snows went down to injury, there were several instances of Pacer players coming to the sidelines in obvious pain.

The Pacers gave up yet another interception for a touchdown early in the third quarter to officially put the game in the loss column by a 56-14 margin.

The Pacers were able to penetrate the rock-solid Lions’ defense late in the fourth with a long touchdown run.

Although the score was lopsided in favour of St. Paul, the Pacers showed improvement in all the facets of their game compared to their first contest.

“The improvement was unbelievable watching from the sidelines. The difference in speed and their understanding of schemes is improving,” said Burden.

The Lions converted on several Pacer turnovers during the game, which Burden and his staff took the blame for.

“I know the score didn’t look good, but a lot that was the coaching decisions. I took some gambles on some calls and they backfired,” noted Burden.

The Pacers were supposed to head to Lac La Biche this Friday, but since Lac La Biche folded, the team has set up an exhibition match with Vegreville to give the younger guys more experience playing on offense.

The Pacers will resume their regular season on Oct. 1 in Cold Lake.