Westlock Minor Hockey back on the ice 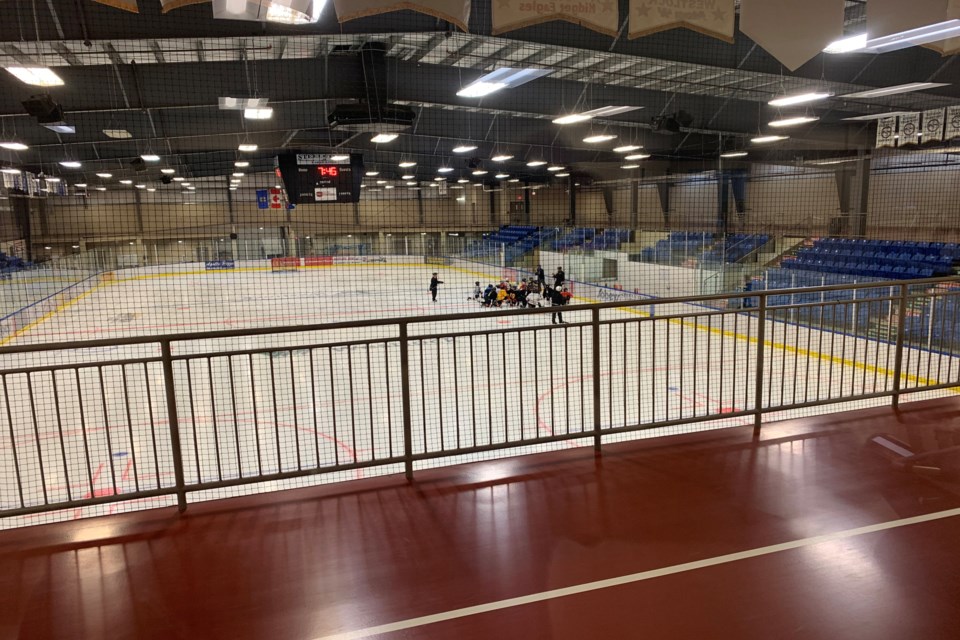 Coaches and players were back on the Rotary Spirit Centre ice Sept. 15 for the start of the minor hockey season. The town has closed the stands and walking track to the public during practices. George Blais/WN

WESTLOCK - Westlock Minor Hockey’s 2020 season will follow lock step with Hockey Alberta’s COVID-19 return to sport protocols, which includes a 50-person cohort limit and a season that may be entirely made up of practices and intra-squad games.

Around 160 skaters of all ages and sizes hit the Rotary Spirit Centre ice starting Sept. 14 for the first week of hockey since COVID-19 abruptly ended the 2019/2020 season in March.

In addition to all the notable changes due to the pandemic, this will be the first year for the age divisions U7, U9, U11, U13, U15, U16 and U18 instead of the traditional initiation, atom, pee wee, bantam, minor midget and midget category names.

Minor hockey president Aaron McNelly said they wrapped registrations Sept. 13 and are now ready to forge ahead with a year that will be unlike any in the association’s history. Numbers-wise they’re relatively close to last year which saw 170 players in the association.

“It’s going to be practice development for the first month and a half and then we’ll see what the league does after that,” said McNelly. “We aren’t going to be extending registrations … with this COVID thing, once you’re in, you’re in. Due to the cohorts, we’re not allowing late registrations.”

Heading into the first night McNelly wasn’t entirely sure what to expect, but said they’re doing their best to give kids a chance to play and continue to develop.

“Tonight is our first night so we’ll see how everything goes,” McNelly said Sept. 14. “There’s going to be some differences as everyone is practicing together, the whole U13 group, so it’ll be a different practice for sure.”

More from the rink

Minor hockey isn’t the only group heading back to the ice, with ringette, figure skating and fun hockey also on tap for the winter.

Town of Westlock community service manager Gerry Murphy told councillors at their Sept. 14 meeting that they met with all the user groups Sept. 1 to discuss the upcoming season and the associated safety protocols. Ice went in Sept. 11 and over that weekend there were some public skating times, although participation for those is limited to 18 skaters who must pre-register.

“We’re following the AHS Guidance for Sport, Physical Activity and Recreation — Stage 2 document for what we’re doing at the Spirit Centre,” said Murphy.

“The facility is fully mapped out. We have to allow for uncontested drop off and pick up for participants. We have dedicated entrances and exits. And the flow is designed to minimize interaction between different cohorts.”

Murphy said they’ve decided to close the stands and walking track during ice times due to cleaning protocols and staff capacity. Some of the other changes players will notice is that the showers have been turned off and there’s an eight-person limit per dressing room — the current Rotary Spirit Centre guidelines, which were updated Sept. 8, are available at www.westlock.ca.

“If I was a parent and really wanted to see my 11-year-old play then I might look for a work around and that (the walking track) would be one,” Murphy said.

“We do sympathize with the parents who aren’t going to be able to watch their children, but the eye on the prize is to keep that facility open and the way we do that is by ensuring that all the participants are safe.”

Murphy said the Pembina Ringette Association has also started practices, while the figure skating club goes live Oct. 5. Fun hockey players won’t suit up until December, while adult hockey was still figuring out its schedule. Over at the fieldhouse, Murphy said the rec volleyball league will give its answer on whether they’ll have a season by the end of next week.

“All users are going slowly in their approach to getting back to normal. They have regulations and stipulations they have to abide by with their own organizations, as well as with AHS,” he said.