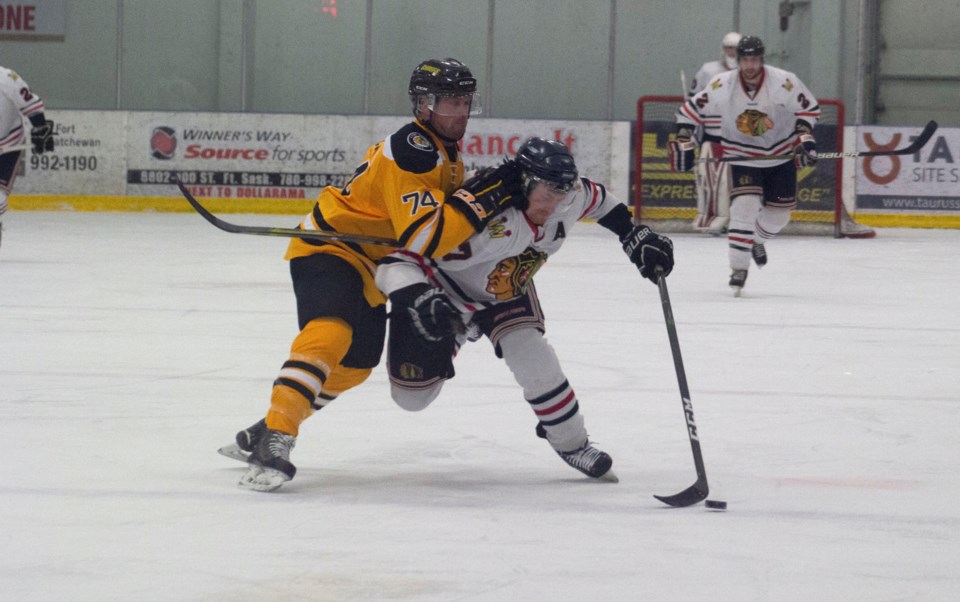 The Westlock Senior Warriors are hopeful they’ll be back on the ice competing in the North Central Hockey League by the end of 2020.

WESTLOCK - The Westlock Senior ‘AA’ Warriors are rarin’ to hit the ice, although when their regular season will start, who they’ll play and if fans will even be allowed to watch remains up in the air.

Warriors’ player/coach Mike Ivey said the North Central Hockey League has tabbed the first week of December as a possible start date, although with COVID-19 still gripping the world, nothing is for certain.

The NCHL’s fall general meeting has been deferred to October, with a date to be determined, and Ivey said he’ll know more following that.

“It’s like with everything with COVID … it’s ongoing. Some days it seems like we’re getting closer and other days it seems like you take a step back,” said Ivey, noting the NCHL held a summer meeting to set a schedule, but took a step back after junior leagues like the WHL and AJHL postponed their seasons until December.

“Dec. 4 is looking like when we might get a start, but that’s up in the air as a new schedule would need to be made. And once we do get going, it’s hard to say if things will be normal, if there’ll be a condensed schedule, or whether we’ll only be able to play against cohorts … it’ll be interesting.

“We’ve been a part of this community for seven or eight years now … we love being a part of it. So it would be really tough not to have fans in the building, especially the kids.

“No matter what though, we want to play and hope the year is as normal as possible.”

It’s been an unusually long offseason for the club as they were eliminated from the NCHL playoff picture following a 9-5 Jan. 17 loss to the Fort Saskatchewan Chiefs.

That defeat capped a 10-game losing streak and ended a season that had begun with a lot of optimism as the Warriors had started 4-2.

“We were done early last year which was pretty disappointing. We were happy with how our team looked and we were in every game. But the last few years have been tough as the league has gotten a lot stronger,” Ivey continued.

“The two years prior to this year we had made the playoffs and gave Morinville a pretty good fight in the first round. But this year had a couple of tough injuries early on and we weren’t able to recover from that.”

As for getting back on the ice, Ivey said they already have some time booked for early October and 20-plus players in the fold.

“The guys are excited to get back on the ice. We have a good core group and I’ve only heard from two of our players out of a total of 25 that aren’t coming back, so I’m happy as a coach to hear that. Plus, I’m hoping to bring in a few new guys,” he said.

“We all miss it. It’ll be nice to get back skating in October and see guys you haven’t seen in a while and play some hockey.”