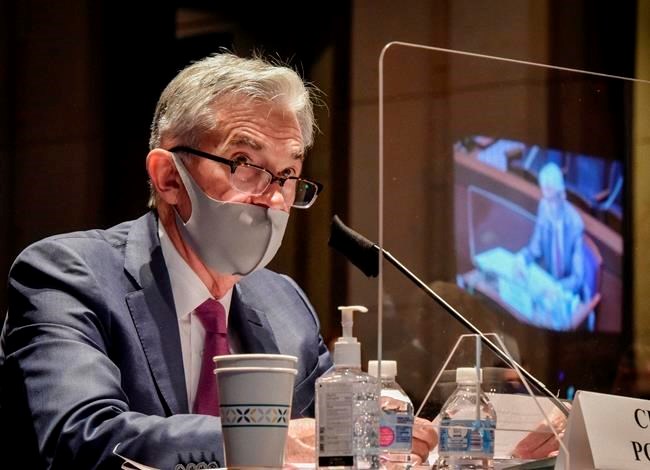 WASHINGTON — With the economy still struggling to recover from the pandemic recession, Federal Reserve policymakers Wednesday that their benchmark short-term interest rate will likely remain at zero at least through 2023 and probably even longer.

Fed chair Jerome Powell said at a press conference that while the economy has rebounded more quickly than expected, the job market is still hurting and the outlook is uncertain. The unemployment rate has fallen steadily since the spring but is still 8.4%.

"Although we welcome this progress we will not lose sight of the millions of Americans that remain out of work," Powell said.

The Fed left its interest rate, which influences borrowing costs for homebuyers, credit card users, and businesses, unchanged at nearly zero, where it has been pegged since the virus pandemic intensified in March. Fed policymakers hope an extended period of low interest rates will encourage more borrowing and spending, though their policy also carries the risk of inflating a bubble in stocks or other financial assets.

Fed officials said, in a set of quarterly economic projections, that they expect to keep rates at zero through 2023. And in a statement released after its two-day meeting, Fed policymakers said they wouldn't raise borrowing costs until inflation has reached 2% and is “on track to moderately exceed” that level “for some time.”

The Fed's projections show that they don't expect inflation to hit that target until the end of 2023, suggesting a rate hike isn't in the cards until 2024 or later.

“The Fed is now more dovish, by a long shot, than it has ever been,” said Stephen Stanley, chief economist at Amherst Pierpont. Dovish generally refers to Fed officials that seek to keep borrowing costs low to support more hiring, while hawks typically support higher interest rates to ensure inflation remains under control.

On Wall Street, stocks initially got a short boost from the Fed’s actions before turning lower. The S&P 500 fell 0.5%. Still, some market analysts liked what they heard from the Fed.

“A better economy and a dovish Fed, that is a nice combo,” said Ryan Detrick, chief market strategist for LPL Financial.

But many analysts were disappointed the Fed was not more specific about how long it wanted inflation to stay above 2%, one likely reason that the stock market ultimately fell.

Still, Carl Tannenbaum, chief economist at Northern Trust, said the Fed will likely keep rates at nearly zero for at least five years. The Fed held its rate that low for seven years during and after the 2008-2009 recession. But there was one key difference: As early as 2012, financial markets began to forecast increases, likely undercutting the effectiveness of the Fed's policy. For now, few investors expect a hike for years.

The Fed ultimately first hiked rates in December 2015, when the unemployment rate was 5%. On Wednesday, the Fed projected that it will keep rates at zero in 2023 even as it forecasts unemployment will fall to 4%.

Powell said the Fed's benchmark rate will stay low “until the expansion is well along, really very close to our goals and even after."

The Fed has significantly altered its inflation goal, from simply reaching to 2% to pushing inflation above that level so that it averages 2% over time. That is intended to offset long periods of inflation below that level.

The change reflects a growing concern at the Fed that in recessions, inflation often falls far below its target, but it doesn’t necessarily reach 2% when the economy is expanding. Over time, that means inflation on average falls further from the target. As businesses and consumers come to expect increasingly lower inflation, they act in ways that entrench slower price gains.

While most Americans prefer lower prices, the Fed seeks some inflation because interest rates partly reflect expected price increases. Low inflation, as a result, pushes interest rates lower. That's a major reason the Fed increasingly finds itself cutting its benchmark rate to zero. Higher inflation would lift interest rates a bit and give the Fed more room to raise or cut borrowing costs.

Powell reiterated his support for more spending by Congress to help the economy recover. Congress is deadlocked on more financial relief because of disagreements on the size of the package between Democrats and Republicans. Some earlier measures aimed at helping consumers, such as an extra $600 in unemployment benefits, have expired.

“My sense is that more fiscal support is likely to be needed,” Powell said.

The Fed also said Wednesday that it will continue purchasing about $120 billion in Treasurys and mortgage-backed securities a month, in an effort to keep longer-term interest rates low. Since March, the Fed has flooded financial markets with cash by making such purchases and its balance sheet has ballooned by about $3 trillion.

On Wednesday, the latest economic report seemed to support Powell's view of an economy on the mend but not fully healthy. The Commerce Department said retail sales rose 0.6% in August, the fourth straight gain but the slowest since sales started growing again in May. The figure suggests that the end of the extra $600 in unemployment benefits weighed on spending.

Kinross Gold shares rise after miner brings back quarterly dividend after 7 years
Sep 18, 2020 3:26 PM
Comments
We welcome your feedback and encourage you to share your thoughts. We ask that you be respectful of others and their points of view, refrain from personal attacks and stay on topic. To learn about our commenting policies and how we moderate, please read our Community Guidelines.