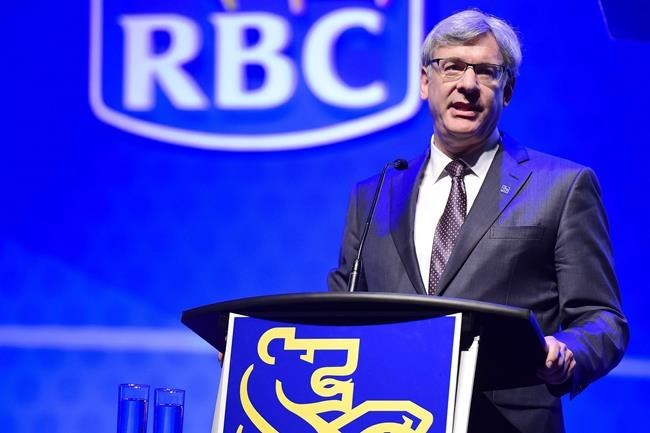 TORONTO — The head of the Royal Bank of Canada says the federal government should be cautious about overspending in its forthcoming budget.

"We don't want to overdo this and some of the numbers that I'm hearing could lead to overstimulation," Dave McKay, the bank's chief executive, said during a media roundtable Thursday.

"Why not keep our powder dry and see how we recover knowing that you've got dry powder to interject quickly, as we've shown we can do in the past year, if things aren't playing out the way we hoped?"

McKay's comments come ahead of the April 19 budget and as the COVID-19 pandemic continues.

After a year of job losses, business closures, extreme pressure on health care, and rent and unemployment relief programs, many are expecting the government to dig even deeper into its coffers to ensure Canada bounces back.

McKay recommended the government use a strategy from his basketball coaching days: "read and react." That means preparing to act when needed but behaving more cautiously in the meantime.

He believes that approach is best because interest rates are at historic lows, with $220 billion of cash on consumers balance sheets and even more on commercial sheets.

Those factors provide significant fiscal and monetary stimulus already, he said, but if the government avoids a huge spend now, it will be able to jump in quickly if the rebound doesn't materialize.

McKay also had advice for how the country could handle the overheating real estate market, which has seen sales soar during the pandemic and average prices in many housing categories top $1 million in Toronto and Vancouver.

Supply, however, has not kept up with demand.

Often monetary policy is used to quell the imbalance and make servicing a larger home and mortgage more expensive, but McKay said in a pandemic, that's not really an option.

He, instead, floated increasing the qualifying rate used for mortgages — a measure the federal bank regulator proposed Thursday afternoon.

"If you were to increase that in the short term, that would put pressure on people overstretching to service a larger home with a low interest rate (and) that would take some of those buyers that require a large down payment out of the marketplace."

While there has been talk of taxing capital gains on the sale of owner-occupied principal residences, McKay called the concept "politically unacceptable" and "bad policy" and said it doesn't make economic sense.

He recommended the country instead listen to what homebuyers want and plan for immigration, which will pick up whenever pandemic-induced travel restrictions are lifted.

"Some action will be necessary to cool this in the short term," he said, but modest measures would likely suffice. "We don't have to overreact to this. We can tweak some of our policies and try to slow down demand while supply catches up."

McKay commented on housing and the budget just after wrapping his bank's annual general meeting, which was held virtually for the second year in a row because of the health crisis.

He focused much of his speech on pushing for society to become more "inclusive, fairer and sustainable" by addressing climate change, inequities that hold people back, the future of work and the digital economy.

The bank received a shareholder proposal requesting it adopt companywide, quantitative, time-bound targets for reducing greenhouse gas emissions, but 68 per cent of those at the AGM voted against it.

Amelia Meister, the senior campaigner at non-profit SumofUs who spoke in favour of the proposal, was disappointed with the outcome.

"If they are serious about tackling climate change, the bank must urgently set short and medium-term targets to reduce financed emissions," she said in an email to The Canadian Press.

"Without these interim targets in place ... RBC’s 2050 pledge isn’t worth the paper it’s written on."

The pledge she referred to involves a commitment to boost RBC's sustainable financing target to $500 billion by 2025 and achieve net-zero emissions by 2050.

McKay also used the AGM to commit to ensuring Black, Indigenous or persons of colour make up 40 per cent of the 1,400 students RBC will hire this summer.

The move builds on RBC's promise to ensure members of these communities amount to at least 30 per cent of RBC’s executive appointments.

In 2019, 1.3 per cent of RBC’s employees based in Canada identified as Indigenous, while 37 per cent were minorities — defined by the bank as people who are non-Indigenous and non-Caucasian in race or non-white in colour.

By 2020, Black, Indigenous and people of colour made up 23 per cent of executive appointments.

“The pandemic exposed, and in some cases, widened inequities that hold people down and communities back,” said McKay. “Our society has a moral obligation and an economic imperative to bring everybody forward collectively and inclusively.”

This report by The Canadian Press was first published April, 8 2021.

Companies in this story: (TSX:RY)

CRTC sides with Videotron in dispute with Bell over access to poles, other structures
Apr 16, 2021 3:34 PM
Comments