Canada Day festivities and the Old Sam logo; In The News for June 30 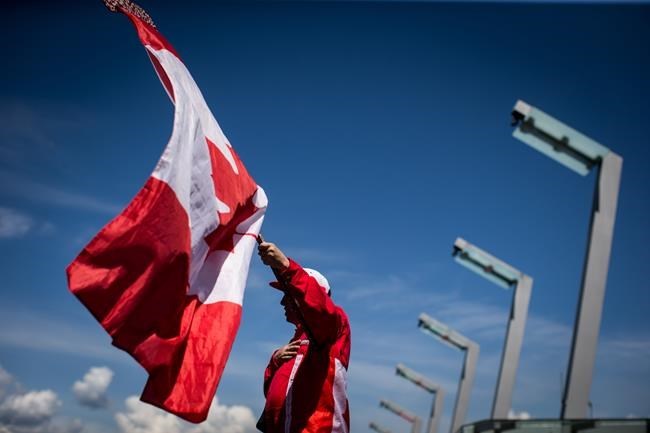 In The News is a roundup of stories from The Canadian Press designed to kickstart your day. Here is what's on the radar of our editors for the morning of June 30 ...

What we are watching in Canada ...

OTTAWA — COVID-19 means the true north is not entirely free this Canada Day, but a new survey suggests that's not going to change how many people mark the holiday.

Leger Marketing and the Association for Canadian Studies surveyed Canadians to see whether, given all that's gone on around the COVID-19 pandemic, they'll be more or less likely to find a way to celebrate this year.

For 42 per cent of those polled, this Canada Day will be no different than previous years.

Sixteen per cent of those surveyed are feeling that true patriot love — they say they're more likely this year to find a way to celebrate, even if it's just a small gathering.

But 38 per cent are standing on guard, saying it's actually less likely they'll mark the holiday.

The poll surveyed 1,524 Canadians online between June 26 and June 28 and cannot assign a margin of error because internet polls are not considered truly random.

VANCOUVER — Celebrating Canada Day for some Indigenous groups in British Columbia isn't a top priority, especially given recent reports of confrontations with police and systemic racism in the provincial health-care system.

Okanagan Indian Band Chief Byron Louis says there's been an erosion of the relationship between government and Indigenous Peoples, which makes it difficult to join the celebration.

Mary Ellen Turpel-Lafond, the director of the University of B.C.'s residential school centre, has been appointed to investigate allegations that some emergency room staff played a guessing game of the blood-alcohol content of Indigenous patients.

She says Canada Day is a symbol of colonialism and recent anti-pipeline protests by First Nations and the Black Lives Matter movement add complexity to the national celebration.

The federal Ministry of Crown-Indigenous Relations says in a statement it recognizes Canada Day isn't a celebration for all and that it is important to acknowledge and apologize for past behaviour.

ST. JOHN'S, N.L. — The Newfoundland and Labrador Liquor Corp. says it will change the logo — but keep the name — of a locally bottled rum brand that appears to depict a laughing Black man.

The Crown corporation says its own research into the 200-year history of Old Sam Rum did not unearth any direct evidence that the image on its labels is rooted in racist stereotypes.

But in a Monday statement announcing the character's removal from the logo, the agency says it was impossible to reach a definitive conclusion about any links to "negative racial stereotypes."

The company announced a review of the product this month after a staff member raised concerns, following several other companies making changes to racist depictions of Black people in brands.

The corporation says its "extensive research" found that the person depicted on the label may be the founder of Edward Young & Co., the company that originally owned the brand.

A description that was removed from the product website on Monday had described the "Old Sam" character as a man who sold rum products along the Demerara River in Guyana in the 1700s.

WASHINGTON — Eight Democrats are to be briefed today about explosive allegations that Russia secretly offered bounties to Taliban-linked militants for killing American troops in Afghanistan.

Republicans who attended a Monday briefing on the matter expressed alarm about Russia's activities in Afghanistan and urged the administration to hold Russian President Vladimir Putin accountable.

White House press secretary Kayleigh McEnany insists U.S. President Donald Trump has not been briefed on the findings because they hadn't been verified.

Members of Congress in both parties are calling for additional information and consequences for Russia.

What we are watching elsewhere in the world ...

HONG KONG — China has approved a contentious law that would allow authorities to crack down on subversive and secessionist activity in Hong Kong.

Tam Yiu-Chung, Hong Kong's sole representative to the Standing Committee of the National People’s Congress, confirmed the law had been passed. The law has sparked fears that it would be used to curb opposition voices in the semi-autonomous territory.

Tam said punishments would not include the death penalty but did not elaborate on further details such as whether the law could be applied retroactively.

Tam said in the interview with reporters, "We hope the law will serve as a deterrent to prevent people from stirring up trouble."

The Bank of Canada stopped issuing $1 bills. They were replaced with $1 coins that came to be known as loonies.

OTTAWA — Statistics Canada will release its reading for gross domestic product for April this morning.

The report is expected to show a record plunge as the COVID-19 pandemic brought non-essential businesses to a halt.

April is expected to be the bottom for the economy with non-essential businesses shut for the full month before they started reopening in May.

Statistics Canada's initial estimate for April that it released last month pointed to a 11 per cent decline in GDP for the month.

Economists on average expect a drop of 13 per cent, according to financial markets data firm Refinitiv.

The Canadian economy pulled back 7.2 per cent in March as the World Health Organization declared the pandemic and non-essential businesses closed to slow the spread.

TORONTO — Alessia Cara emerged the top winner at this year's Juno Awards, scooping up three trophies in a pre-recorded ceremony that paired celebration with an acknowledgment that more needs to be done to represent the diverse voices of Canadian artists.

While the Junos usually mark the biggest night for the country's music industry, the Monday event, which streamed online, took on a noticeably different tone in isolation. Missing were those euphoric acceptance speeches inside a massive venue filled with adoring fans, replaced with a handful of intimate performances and some serious reflection on the future.

Running a bit over 90 minutes, the Junos were handed out at historic speed, with 42 categories announced by presenters that included "Stranger Things" actor Finn Wolfhard and singer Jessie Reyez, who also pocketed her third career Juno during the event.

But it was the 23-year-old Cara who shone brightest as her deeply personal 2018 "The Pains of Growing" picked up both album and pop album of the year, while she also won songwriter of the year for her work on several of its tracks.

It was an uplifting finish for the Brampton, Ont.-raised pop singer after her dreams of hosting the awards show were dashed in the wake of COVID-19. She was originally lined up to be MC for the televised event in Saskatoon last March before organizers pulled the plug in response to the pandemic.

Seniors cut off from income supplement after receiving emergency benefits
Aug 5, 2021 2:00 AM

Meng Wanzhou's lawyers claim U.S. is a 'repeat misleader' in her extradition case
Aug 5, 2021 2:00 AM
Comments